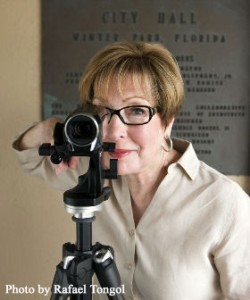 Anne Mooney has assumed the editorship of the Winter Park Voice from founding editor Tom Childers.

Mooney got her start in New York as a freelance line editor for book publishers, among them Simon & Schuster and the Clarkson Potter division of Crown Books. From New York, she and her husband and their year-old toddler moved to Washington, D.C., where the two ran a newswire service for Harper’s magazine. “We called it Network News,” said Mooney, “because it was a network of the Harper’s writers, whose work we edited into newspaper style and format and sold to papers in the top U.S. and Canadian markets. We were sort of like a tiny UPI.”

The newswire ceased operation with the death of Mooney’s first husband, but Mooney continued to write and edit, doing freelance work for Williams Sonoma cookbooks and for local publications in D.C.

In 2005, Mooney moved to Winter Park, where she worked as a personal chef and wrote a regular food column for a south Florida magazine. She took an active interest in Winter Park politics and was there when the Winter Park Voice was founded. She wrote occasional pieces for the Voice, including the Childers bio that this piece replaces.

The Winter Park Voice is one of a large number of “hyper-local” publications that have sprung up across the U.S. in response to the decline of the major daily newspapers and the resulting deficit of local news coverage. The Voice’sbeat is Winter Park City Hall, and its purpose is to help the residents of our city better understand the political forces that shape our daily lives.
[/av_textblock]