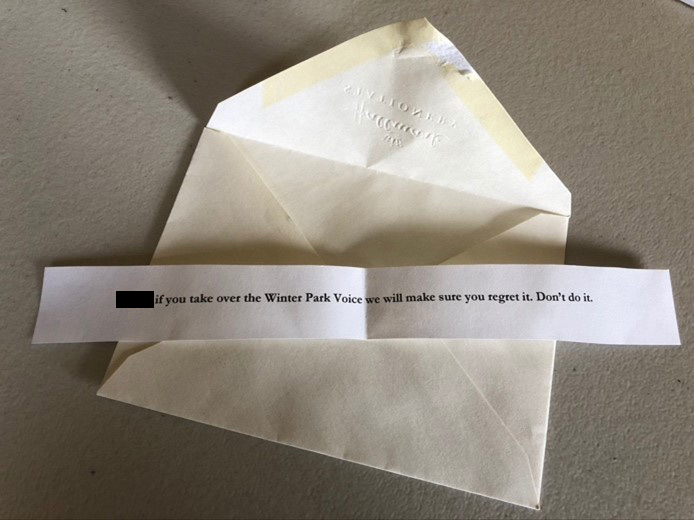 On Monday, July 25, a small, unmarked envelope – the kind that comes with a greeting card – was found slipped under the office door of a prospective Winter Park Voice editor, who has asked not to be identified in this article. Inside the envelope was a small strip of paper, shown in the photograph below, which contained the following message.

“[Name] if you take over the Winter Park Voice we will make sure you regret it. Don’t do it.”

On Friday, July 29, the would-be editor arrived at the work place to find the letters “F * C K [NAME]” spray painted on the grass in dayglo pink.

Word is on the street, apparently, that it was my intention to step down this fall as editor of the Winter Park Voice and that someone was in line to take my place. We had planned to announce this in early September once we had completed the administrative details of the transition. That will no longer happen, as the person in line to take over has withdrawn in the face of this intimidation and harassment.

No Responsibility Taken for Threat

There were no markings on the envelope. There was no signature on the message. And spray paint is anonymous. It is impossible, therefore, to know who the “We” is that was going to make sure the new editor regreted taking over the Voice. All we know about the person or persons who wrote and delivered these threats is a: he/she/they is/are a bully, and b: he/she/they lack the courage to sign their name(s).

On a personal note, it is disturbing and disheartening to realize, in our beautiful city, there is anyone so mean-spirited and angry that they would threaten the incoming editor of an online local news organization – before that person has written word one.

For now, the Winter Park Voice remains dedicated to unbiased, accurate reporting of the news and events of the city. If anyone has issue with our reporting we welcome and encourage debate in our forums and guest columns.

As these events occurred on City-owned property, the Winter Park Police Department has been made aware of the situation.