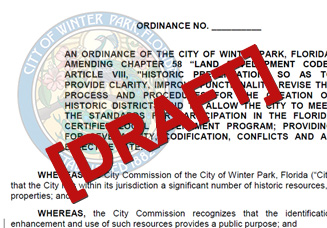 At his first HPB meeting on August 12, Bill Segal was elected Chairman by the four members present – which included Segal himself — replacing Interim Chair Rebecca Talbert. Phil Wood was named Vice-Chair. The fourth member present was Genean McKinnon, who nominated both Segal and Wood. Talbert expressed her willingness to remain as either Chair or Vice Chair, but her motion failed for lack of a second.

Once the question of board leadership was settled, the first order of business was a review of the revisions to the draft Historic Preservation Ordinance that will come before the Commission at the November 9 meeting.

Frank Hamner of the Citizens’ Group that has been working on the draft ordinance presented the latest version to the HPB. During the arduous page-by-page review, Hamner and City Planning Director Dori Stone found themselves in the curious position of defending historic preservation to the very board that is meant to champion the cause.

HPB Is Not So Sure

Discussion among the board members was more about the disadvantages the proposed ordinance would create for individual homeowners than about possible benefits to the City of preserving historic buildings and districts. “Everything we’re doing here creates an added burden,” said Segal.

Hamner pointed out that, unlike other cities, Winter Park has no means, other than the ordinance, to protect a truly historic home.

Segal expressed concern about the City’s application to the State of Florida to become a Certified Local Government (CLG). He worried about “extra levels of government” and additional reporting requirements. Despite Stone’s assurances that the City already complies with most of the CLG requirements, and that CLG status would not put any appreciable extra burden on city staff, Segal could not be persuaded that it is a good idea for the City to apply for CLG status. “We just don’t know what we’re buying into,” said Segal.

What Is a CLG?

Stone pointed out that the intention to achieve CLG status has been in the City’s Comprehensive Plan for the past 14 years, though the City has never made formal application to become a CLG.

The CLG grants tend to be small — $50,000 or less – but they have their merits. For instance, the last inventory of potential Winter Park historic assets was done in 2001. Since that time, much has changed. We are told there is no money in the budget to update the inventory, but if Winter Park had CLG status, it would qualify for a grant to complete the inventory. The inventory would cost in the neighborhood of $10,000 and is the type of project for which the grants are intended.

The August 12 meeting ground to a halt shortly before noon, as Genean McKinnon had to leave. With only three members seated, the board no longer had a quorum and could take no action. They resumed the long slog through the revisions on the afternoon of August 19. At that meeting, Dori Stone informed the board that they would receive a completed draft reflecting all proposed revisions, and that they would vote at their September meeting on whether to approve the ordinance.

Once the final draft has been approved by the HPB, it will go for public hearings in October and then for a final vote by the City Commission at the November 9 Commission meeting.

Winter Park: Unique for Not Being a CLG

So far, language stating that Winter Park will seek CLG status remains part of the existing Historic Preservation Ordinance. Sixty-eight Florida cities and 12 counties are Certified Local Governments. Most Florida cities that are known to have historic resources are CLGs – among them Tampa, St. Pete, Miami, Coral Gables, Sarasota, Orlando, and the list goes on until you get to the Ws, where you’ll find West Palm Beach, Windermere, and Welaka . . . but not Winter Park.

There appears to be firm conviction on the part of Mayor Leary, some members of the Historic Preservation Board and certain denizens of the blogosphere that CLG status will introduce yet another layer of government and bureaucracy, which will be onerously burdensome to city staff – though city staff doesn’t seem to see it that way. Planning Director Dori Stone, who would be the local official responsible for administering the CLG program, informed the HPB that the City of Winter Park already fulfills nearly all the requirements for being a CLG, and that any additional staff work would perhaps entail an extra 8 to10 hours per year.

What do the Real CLGs Tell Us?

The folks at Preservation Winter Park were also curious about the amount of work required of CLGs and whether the burden outweighed the benefits. They contacted people with firsthand knowledge, among them local officials who administer the CLG program in West Palm Beach, Lakeland, Miami-Dade and the City of Orlando.

This is what they were told.

West Palm Beach: “In no way has it been a burden. One hour a year of completing a report and emailing minutes.”
Lakeland: “To my knowledge, Lakeland has not been burdened by our CLG status whatsoever.”
Miami-Dade: “It’s never been a burden to be a CLG.”
Orlando: Small amount of staff time for reporting to state and National Park Service.”

Is This How You Would Describe Winter Park?

In her email to Preservation Winter Park, Kathleen Slesnick Kauffman, Historic Preservation Chief of Miami-Dade County, wrote: “It is not a difficult or lengthy process to become a CLG, but the whole point of the program is to provide a benefit to cities or counties that have an expressed interest in saving their heritage, and have made it a priority to do so by having a strong preservation ordinance.”

She continued, “Is this how you would describe Winter Park?”