Bowling Alley Gets the NOD

Bowling Alley Gets the NOD 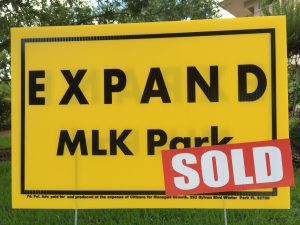 Pleas of the Parks & Recreation Advisory Board and the citizens to move more slowly fell on deaf ears Monday night as Commissioners voted 3 to 2 to put up the For Sale sign on the bowling alley property at 1111 W. Fairbanks.

A 20-foot setback along Fairbanks will be retained to build a turn lane onto 17-92. The property is zoned C-3 commercial. According to Planning Director Dori Stone, the City will exclude proposals for banks, fast-food restaurants and automobile services (gas stations, repair shops, etc.) at this location.

The Notice of Disposal (NOD) will be publicly advertised, and bids are due 30 days from the publication date. The city realtor, Bobby Palta from CBRE, noted there was already considerable interest in the property, and that the City had been doing some “pre-marketing for the past couple of weeks” with various developers.

The property is appraised at $2.96 million, which will be the minimum bid price – $60,000 more than the City paid when they bought it from Rollins in 2016. The Commissioners will, however, maintain flexibility in their choice, giving preference to plans that include less tangible assets like tree planting and additional green space.

Skipping Steps in the Process

Commissioner Carolyn Cooper expressed her discomfort with the process by which the Commission arrived at the decision to sell. She noted the process had gone from the public GAI workshops to the Commission without first going through the advisory boards. During the GAI public meetings, the bowling alley property was not supposed to be part of the discussion, but actually played a prominent role in the discussion that occurred at both meetings. Cooper suggested the decision to sell the land be tabled and returned to the Parks & Recreation Advisory Board so they could bring their recommendations back to the Commission at a later date.

‘There’s Still Much We Don’t Know’

Cooper enumerated new pieces of information which the Commissioners had not had a chance to factor into their decision. As examples, she cited the GAI public workshops and the letter from the Parks & Rec Board requesting the City not move to sell the property. P&R letter

She noted other information the City doesn’t have yet, like an evaluation of the storm water retention requirements that will be created by the new library-event center, and new corridor design standards for West Fairbanks, which have yet to be completed.

“From my perspective,” said Cooper, “we are premature, we have not utilized our boards and we are not listening to the requests of our citizens.”

Commissioner Greg Seidel proposed Commissioners delay the sale to give them time to involve the Florida Department of Transportation (DOT). Instead of assuming an extra turn lane is the best solution, FDOT could do an intersection control evaluation at Fairbanks and 17-92 to give the City the benefit of their expertise. Seidel argued that the City could work to persuade DOT to prioritize a determination about what technology would be most appropriate at that location.

Cooper’s motion to table, for no time certain, failed for lack of a second. Greg Seidel then moved to table for a time certain of three months. His motion was seconded by Cooper, but failed on a 3-2 vote.

Public comment, with one exception, opposed selling the property before there was a chance to weigh the consequences of this action. Former Mayor Joe Terranova pointed out, “We don’t need that cash money now. You’re going to make payroll the next time it comes around.”

‘Just How Serious Are You?’

Beth Hall argued for the aesthetics of a major City gateway. “I wish I could count the number of times I have heard the Commissioners discuss their desire to improve the Fairbanks corridor and the western gateway to the city,” said Hall. “Your efforts have run the gamut from spending large sums to improve sewer and utilities on the artery to making zoning changes to encourage development. I’d like to ask: just how serious are you?”

Don’t Resign it to Mediocrity’

“Wouldn’t converting this site to parkland further your mission?” she asked. “Adding the land to the park would signal a paradigm shift in the way our City views this gateway. Don’t resign it to mediocrity. Elevate it. Please reverse your decision to sell the land.”

‘Commercial Land — Never Meant to be a Park’

In an email sent the day following the Commission meeting, Commissioner Sarah Sprinkel explained the rationale behind the vote to sell the bowling alley property. “The city purchased the property for the turning lanes,” she wrote, “did not use park acquisition dollars and never intended to turn that piece of commercial property into parkland.”

Need to Build Back the Reserves

In answer to the question of why the Commission had not sought the input of the Parks & Recreation Advisory Board Sprinkel wrote, “The boards have a charge and since this was commercial property used for traffic alleviation it was not considered part of their [Parks & Rec] charge. The 3 million dollars returned to the fund [the City’s General Fund] will allow wp [sic] to continue their strong 20-25% reserves,” reserves that may play an important role in the next election cycle.

Bob Bendick pointed out that the City is in the midst of creating a Master Plan for MLK Park, and that the decision to sell land that is contiguous to the park is premature.

“Thinking has also evolved about parks planning,” said Bendick, “including the need to go beyond direct recreation needs and to better integrate parks, open space and pedestrian and bicycle transportation into the fabric of communities.”

Bendick noted a reasonable desire among some Commissioners to recoup funds spent to purchase the bowling alley property, but cautioned that once sold for commercial development, the opportunity to incorporate the land into the park would likely be gone forever.