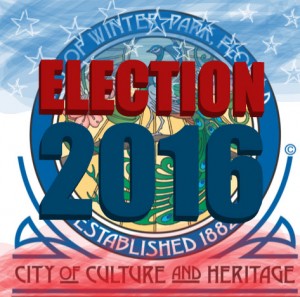 Invitations to campaign fundraisers follow close on the heels of kickoff parties, with the holidays barely behind us. The race for Commission is ON. Lambrine Macejewski challenges Carolyn Cooper for Seat #3, and Peter Weldon will oppose Tom McMacken for Seat #4.

We are requesting that when you receive an email or a flier from a candidate, please scan front and back and email it to the Voice at editor@winterparkvoice.com  We will eliminate any reference to your name, address or other identifying information before we publish.

The Voice will use this information to post a chronology of communications from each candidate. When you are forming your voting decisions, whether you are filling out your absentee ballot or going to the polls, it may be helpful to review each candidate’s position on the issues.

If you receive a phone call about the candidates or the issues, please record it if you can. Remember, you should always get the consent of all parties before recording any telephone conversation or any in-person conversation that common sense tells you is private. We will post a link so others can listen. If you need assistance, email editor@winterparkvoice.com or call 407-671-2964. There will be someone to assist you.

Some voters report they have already received one political phone call, though when the pollster was asked the origin of the call, neither he nor his supervisor could provide that information. According to the Orange County Division of Elections, if the pollsters make fewer than 1,000 calls and the duration of the calls exceeds two minutes, the call is presumed to be a “political poll,” and no disclosure is required.

This poll solicited Winter Park voters’ opinions of Congressman John Mica, Mayor Steve Leary, candidates Peter Weldon and Lambrine Macejewski, and Commissioners Tom McMacken and Carolyn Cooper. The pollster then asked closely worded questions about issues such as the Historic Preservation ordinance, the Dog Park and development in Winter Park, which could have been a reference to the Carlisle.

In addition to campaign coverage in local media, there will be four candidate forums where you can see the candidates square off in person.

Hosted by the Winter Park Chamber of Commerce

To request or check the status of your absentee ballot, visit www.ocfelections.com  or call the Orange County Supervisor of Elections Office: 407-836-2070.