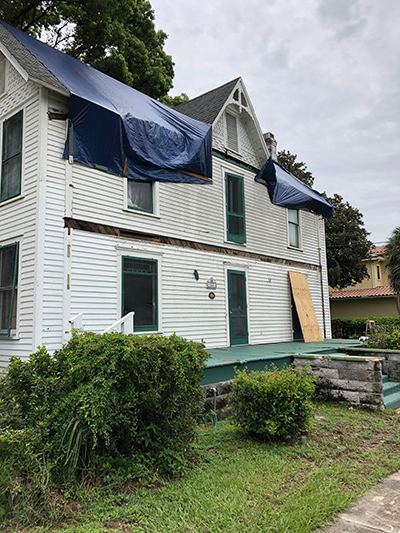 The Waddell House at 1331 Aloma Avenue was built in 1901, the year Walt Disney, Ed Sullivan and Louis Armstrong were born, the year President William McKinley was assassinated and Theodore Roosevelt became the 26th U.S. President. Hurricane Donna may have roughed up the old house in 1960, but she stood firm and hardly blinked at the Cuban missile crisis. In the end, however, she was no match for the Tennessee attorney who sheared off her façade — the intricate porch design that had been the face of this grande dame for more than 100 years.

In 2005, Charles B. and Lurinda J. Smith had the home placed on the Winter Park Register of Historic Places. Mrs. Smith’s family had owned the Waddell House for well over 100 years. This act was intended to bring peace of mind and the assurance the house would be preserved and protected. 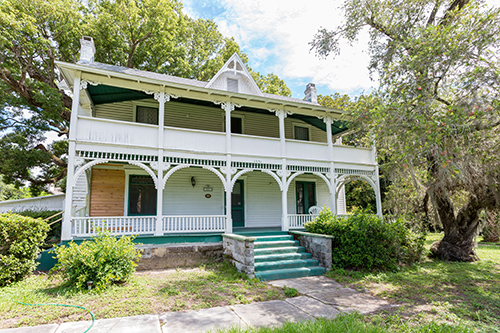 Situated on 45,600 square feet of land, historic designation allowed the Smiths to subdivide a 90-foot lot on the east, while preventing further lot splits by future owners. The Smiths could have razed the old house and, with city approval, split the lot into three 15,200 square-foot home sites. They chose instead to preserve a bit of history.

In February 2019, fully aware of the designated historic status and the protections this provided, David and Deborah Dunaway purchased the home for $480,000. According to an email from City Planning Manager Jeff Briggs, the Dunaways met with City staff to confirm their intention to restore the home. They indicated the porch was unstable and that they planned to remove and replace it exactly like it was. Staff advised that before they could do that, their plans had to go to the Historic Preservation Board for approval.

Porches Removed Within the Year 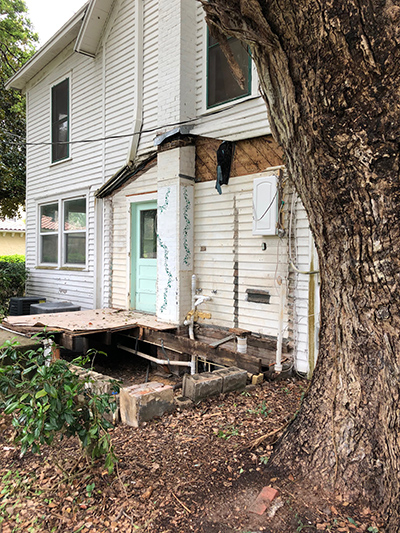 On Monday July 15, the Building Department issued a Stop Work Order and directed the owners to submit plans for the restoration of the porches. A tarp had been draped over the roof, but it was improperly secured, and by mid-September, the house had endured two months of water intrusion — a house with horsehair plaster walls and heart of pine floors. Briggs emailed the owners, who said they would correct the problem, but by October 7, nothing had been done to secure the tarp to prevent water intrusion. There was no reply from the Dunaways.

‘Don’t Think We Can Fix It’

Briggs wrote that the owner later said he has retained the services of Orlando Constructors and Inspectors, “to do a complete appraisal of the structural integrity of the home to determine if repairs are possible and feasible or if the home needs to be demolished.”

The neglect of the house appears to be strategic.

In an email to Jeff Briggs, Christine Dalton, formerly Historic Preservation Officer for the City of Sanford and currently a Trustee of the Florida Trust for Historic Preservation, expressed her concern about the condition of the Waddel house. “With the information I have received so far,” she wrote, “it appears obvious that the property owners are engaging in Demolition by Neglect. They are dismantling the home and have not properly protected it from the elements. As you know, this is a strategy of many property investors – create conditions for deterioration, then hire a structural engineer to write a report stating that the building is unsafe and therefore must be demolished.”

On November 1, the City sent the owners a Notice of Violation advising them that a Public Hearing before the Code Enforcement Board was scheduled for 3:00 pm on December 5, 2019. The description of the violation was “Porch Structure Removed Illegally Without a Permit.”

Stated Compliance Requirements were, “Submit Plans for the Restoration of the Porch Removed Without a Permit,” with a deadline of November 15, 2019.

According to Briggs, “Nothing can happen with the home until a proposal/plans are submitted to the HPB [Historic Preservation Board], or (upon appeal) the City Commission can approve the demolition of the home.”