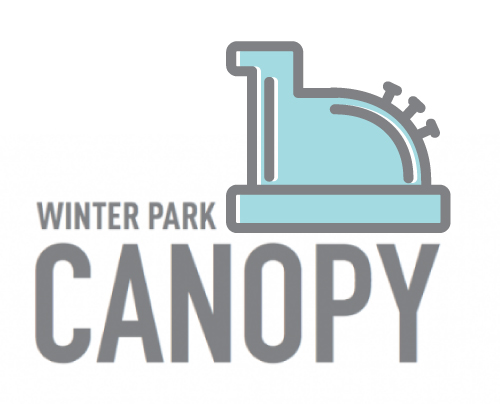 Hoping to raise more money for the city’s planned library and events center, a group of Winter Park officials is asking Orange County for $6 million in tourism tax revenue. The focus of their pitch isn’t books, but the number of tourists the Canopy project could lure to the city.

The public was not invited to the February 18 gathering at the County Commission chambers. While both Commissioner Sarah Sprinkel and Pete Weldon were present in the chambers, Commissioners Carolyn Cooper and Greg Seidel were absent. Cooper said she was not told about it. “The only information shared with me was that one of several possible funding sources was a grant from TDT ARC. I was not told about the meeting or the presentation,” she said when questioned about her absence. Commissioner Greg Seidel stated that he had reviewed the grant application prior to the meeting and had offered his “two cents,” but has not engaged in raising funds for the project.

Tourism development taxes are charged on short-term rentals such as hotels, motels and AirBnb properties. Typical uses of the money permitted under state law include construction of such tourism meccas as convention centers, sports stadiums and museums. Libraries aren’t tourist draws, but the Winter Park group clearly believed a grand event center designed by a famous architect might be.

Mayor Leary opened the discussion with a power point on Sir David Adjaye, the internationally famed British architect chosen to design the project, called the Canopy. Leary touted Sir David’s knighthood by Prince William and flipped through photos of Adjaye’s many government and institutional buildings, pointing out Adjaye’s work draws visitors “from around the world.”

Adjaye Design Offers “A State Asset Open to All Classes”

Adjaye sent a specially made video in which he commented on Winter Park’s unique character. “Winter Park is an extraordinary and small community in Orlando but has extraordinary ambition with incredible leadership. . . The library and events center project came from a very rigorous study of the climate and culture.” Adjaye predicted the $40 million project would become a “. . .state asset and be open to all social classes.”

Also speaking on behalf of the city were David Odahowski, President and CEO of the Edyth Bush Charitable Foundation (EBCF), and Jane Hames, a member of the newly formed Chamber of Commerce Tourism Advisory Board. Former Mayor Ken Bradley was in attendance.

“The Canopy Events Center will be a cornerstone for a tourism strategy enhancing our ability to host larger meetings, celebrations and trainings. . .With your support the Canopy will launch the next ‘Golden Age’ of Winter Park tourism,” he said.

Welcome Mat is Out for Tourists

City Manager Randy Knight predicted the Canopy project will conservatively result in over 5,200 additional hotel stays per year and over one million dollars in hotel revenue. Currently there are three new hotels under construction and two others in the public approval process.

He predicted the Canopy will be more sought after as a wedding venue than the Farmer’s Market, given its architect’s international fame. Knight said the Rachel Murrah Civic Center, which has been torn down, hosted 250-400 guests. The Canopy will have four separate spaces suitable for wedding parties. Knight stated the facility will have the capacity to host statewide conventions and he estimated 1,200 Winter Park hotel stays annually from those conventions.

Knight said it’s hard to predict just how many tourists might visit the site based on its architectural merits, but he noted that more than 30,000 visitors travel annually to Florida Southern to discover Frank Lloyd Wright’s work.

Some visitors could stay at the Alfond Inn, which now is planning a 73-room addition, Knight said. According to City Planning Manager Jeff Briggs, the 110-room Hilton Garden Inn and the 120-room Spring Hill Suites by Marriott recently broke ground at Ravaudage. Three other hotels are in early stages of planning and approval. Knight stated City staff is exploring selling other city-owned properties for hotel space.

Knight noted the city’s long and close relationship with the Chamber of Commerce, which is actively recruiting tourism from Brazil and the United Kingdom. Jane Hames, who chairs the Tourism Task Force of the Winter Park Chamber said an informal Chamber study found that British residents are the largest population visiting the Chamber’s Welcome Center on Lyman Ave.

Both Knight and Leary assured the Orange County board members that the Canopy is a shovel-ready project that has “wide community support.”

Nevertheless, the Canopy project has been surrounded by debate since a $30 million bond referendum was put on the ballot in 2016 for a new library, events center and parking garage. Of the 5,411 voters, 51 percent approved the bond issue. Later that year, a group of citizens collected more than 2,000 signatures to challenge the location in Martin Luther King Park, in hopes of preserving the park’s green space. That effort failed in the courts. Recently, park patrons were furious to discover that a large number of mature trees had been removed at the site.

Although the Canopy is still in the design and development stage, Knight said a feasibility study by a professional firm shows the center will easily cover its annual expenses with a profit. Knight and Leary promised they would not seek additional operational support from the tourism revenue.

Knight displayed a chart illustrating just how important the tourism dollars are to the City’s ability to build the Canopy. Of the $40.1 million needed for construction, $28.7 million will come from the net bond issue, $5.4 million from additional community support which was not described in detail, and $6 million in tourism development money. Another potential source of funds would be the sale of the existing library property on New England Ave.

Build It & They Will Come

City leaders suggested these large numbers of tourists will generate revenue on many fronts, and the activity around the canopy will drive intense redevelopment. Mayor Leary provided an aerial view of the project, claiming it’s more than shovel ready, it is shovel active. After the project is completed, he said, the City plans to plant over 1,300-caliper-inches of trees of different species.

According to Commissioner Greg Seidel, the project plans are at a percentage of completion “somewhere in the sixties.” Seidel explained that when the plans, including all the add-alternates, reach 80 percent completion, the Commission will have adequate information upon which to base their decisions. Seidel estimated things would come together some time in April, when the City will have nearly completed plans and will have a better idea of how much money is actually available.