In contrast to January 13 – 16, the Commission breezed through its January 27 meeting, even though they discussed several items of major importance to the community, among them acquisition of the US Post Office property and approval of the Canopy project. 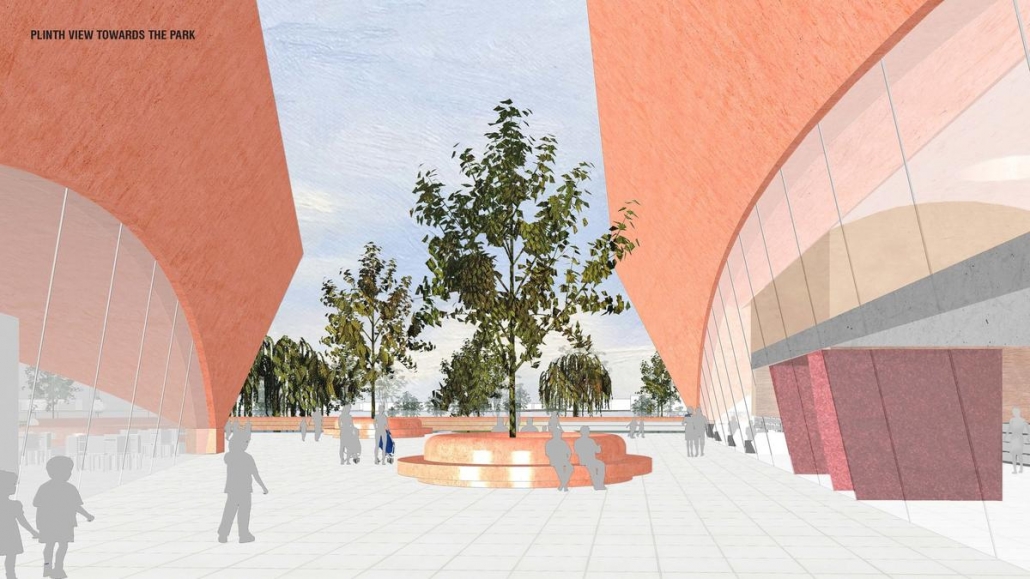 Canopy Approved 3-2, and is No Longer the Canopy

The big news – well, it’s long past being news, this being Winter Park – is that the library-events center project finally received a 3-2 thumbs-up from the Commission. The issue had been tabled at the earlier January 13 / 16 meeting. Mayor Steve Leary and Commissioners Greg Seidel and Sarah Sprinkel voted to proceed with the Library-Events Center project now that there is a construction budget, despite the fact that project funding is still shy several million dollars – how many million depends on which math you use. Commissioners Carolyn Cooper and Todd Weaver voted against.

Commissioner Greg Seidel moved to rename the project The Winter Park Library and Events Center. The motion passed 4-1, and the ‘Canopy’ moniker is a thing of the past.

Prior to the regular Commission meeting, the six-member Community Redevelopment Agency (CRA), consisting of the five City Commissioners plus Orange County Representative Hal George, met to discuss their spending priorities for the millions of unallocated tax dollars that will flow into the CRA before it sunsets in 2027.

Cooper led off the conversation with her list of priorities. Lengthy discussion that followed revealed very little disagreement among the Commissioners. First on the priority list was to give City Manager Randy Knight and City Attorney Kurt Ardaman the green light to negotiate with the US Postal Service to secure the current Post Office site for the purpose of expanding Central Park. The plan is for the retail Post Office to remain in the City core, and for the City to work with USPS to relocate the distribution facility to somewhere outside the City core.

The price tag to the City could easily run six to seven figures, but Commissioners agreed on a 5-0 vote that it was worth it to secure land to expand Central Park.

Other priorities included a $750,000 enhancement to the Library, lighting and tree design for SR 17-92, $3 million for MLK Park improvements, an $8 million downtown parking garage, $4 million for a parking garage that will not be in the park but will service MLK Park and $200,000 a year for affordable housing. The CRA will maintain a 20 percent reserve fund.

Immediately after the CRA meeting adjourned, the regular Commission meeting opened with a presentation by DPAC President and CEO Kathy Ramsberger. DPAC is celebrating its fifth anniversary. The audience at City Hall was treated to a full array of statistics on attendance, programming, past and future fundraising and the center’s fiscal health in acknowledgement of the City’s status as a major donor to the arts center.

Ramsberger noted that over the past five years, DPAC has doubled their business, climbing from $22 million the first year to ‘close to’ $44 million, partly the result of growing ticket revenue outside Orlando. “This is an international organization – a destination,” said Ramsberger, “generating over $700 million in economic impact.”

Going from one grand project to the next, the Commission took up the question of the Winter Park Library and Events Center, deciding on a 3-2 vote to proceed with the project.

As the Library-Events Center project moves forward, and Winter Park looks forward to a grand new facility, it may be wise to keep in mind points made by dissenters, including the citizens who offered public comment and the Commissioners who voted against the project because they felt it had strayed too far from the initial concept approved by the voters.

As Peter Gottfried pointed out, nearly 11,000 people voted on the $30 million bond issue, and it squeaked through on a margin of just 214 votes.

UCF Professor Jay Jurie questioned the emphasis on parking lots and garages and said, “We may very well be at the end of the fossil fuel era.” He likened the current planning process to “classic Maginot Line” planning, referring to French plans to repel a German invasion which, said Jurie, were unsuccessful because the French “were planning for the last war, not the war that was coming.” He urged the Commission to “look forward” and to be mindful of the climate crisis and the need for an effective and efficient public transit system.

Not the First Adjaye Design to Break the Budget

Deuchler cautioned that the Adjaye-designed African American Museum of History and Culture in Washington D.C. is an example of what could happen here. Over the course of that project, the structure increased in size by 14 percent over initial specifications and costs went over original budget projections by “a whopping 80 percent,” according to Deuchler. Initial projection was $300 million; final cost was $540 million.

Adjaye himself admits that, when it comes to his work, “whether working on a house or a grand civic project, . . . controversy is normal.” In 2019, Adjaye told London’s Financial Times reporter Helen Barrett, “If you want a tasteful and elegant thing, you’re not going to come to David Adjaye. I’m interested in clients who have a strange site that has a difficulty. Those are the projects I gravitate towards, and those are the kind of clients that gravitate towards me.”

Following the library-events center vote, the Mayor opened the floor for public comment. Four people, only one of whom was from Winter Park, spoke in strident tones objecting to the presence of the Winter Park Police Department’s armored car at the recent Martin Luther King birthday celebration in Hannibal Square. That armored car has appeared in previous Hannibal Square events, as well as in the Christmas and St. Patrick’s Day parades. It seems to be a draw for kids – of all ages.

The speakers, citing strife on a national level between police and African Americans, particularly young black men, urged the City to emphasize peace and community building rather than a display of police force at events celebrating the life of Martin Luther King, Jr.

Police Chief Michael Deal expressed surprise, as he had worked closely with community leaders in the Hannibal Square neighborhood to plan the participation of his department in the event. “Well,” said Deal, “I have the next year to work with the community to see what they want, and if they are uncomfortable with the armored car, we’ll plan something else.”

“Above all, I want to honor the life of Dr. King,” said Deal. “He did not go to jail 29 times and give his life for his cause to perpetuate this kind of dissension. Our mission is to go into the community and build positive relationships with people, especially the children.”

After a second vote by the Commission to move forward on negotiations with the USPS and the approval of a plat of 10 single family homes on New York Avenue on land previously owned by the Christian Science Church, the Commission unanimously approved a free-standing Starbuck’s on Lee Road. Shortly afterward, the meeting was adjourned.