But Will They Raise the Tax?

At their July 22 meeting, the Commission set a tentative millage rate of 4.5623. That figure represents a cap, a not-to-exceed number, and it’s the first raise in 13 years. Between now and September 23, the Commission can decide to leave the rate at its current level of 4.0923, they can raise it a little, or they can raise it to the 4.5623 cap set at the July 22 meeting. Much depends on information the City still does not have, such as information regarding available funds from the state in FY 2021. Ultimately, those projections will depend upon the depth of the recession caused by the coronavirus pandemic.

Nothing is final until September 23.

Because each year’s budget is adopted by ordinance, two readings with public input are required. The first reading of the FY 2021 budget is September 9; the second and final reading is September 23. The FY 2021 Budget will be adopted and the final millage rate will be set when the Commission votes on September 23.

It’s not just the City that sets the tax rate.

The City establishes the millage rate by creating a draft budget that seeks to balance projected expenses and revenues. Simultaneously, four other entities are doing exactly the same thing – each with eyes on our tax dollars. Our tax bill is based on a combination millage rates set by five entities — Orange County, St. Johns River Water Management District, the School Board, the City of Winter Park and the private debt created by Winter Park voters to build the Public Safety Complex and the Library-Events Center. These five millage rates will combine to form the rate we will pay on the assessed value of our property. The current rate for Winter Park is 16.3156.

The economy has contracted in the pandemic.

According to Finance Director Wes Hamill, the City is currently facing a shortfall in 2020 of about $3 million due to the coronavirus pandemic. Hamill said he believes that by cutting costs, but without cutting services, there is still a good chance the City will break even by the September 30 year end. Some events, such as the Fourth of July parade, were cancelled because of the pandemic, thus saving those funds. Several open City positions have been frozen. If there is still a shortfall at the end of September, Hamill said the City will use reserves to cover the difference.

Hamill says he anticipates a $1.4 million decline in the FY 2021 budget from 2020. He did have one piece of good news, though. The City’s obligation to contribute to Sunrail has been delayed for two years, and will not begin until 2023.

Despite the doom-and-gloom spin circulating the blogosphere, the City remains in good shape. The proposed budget document points out, “Winter park is fortunate to have the lowest operating millage rate among major jurisdictions in Orange County.” A comparison of tax rates is below. 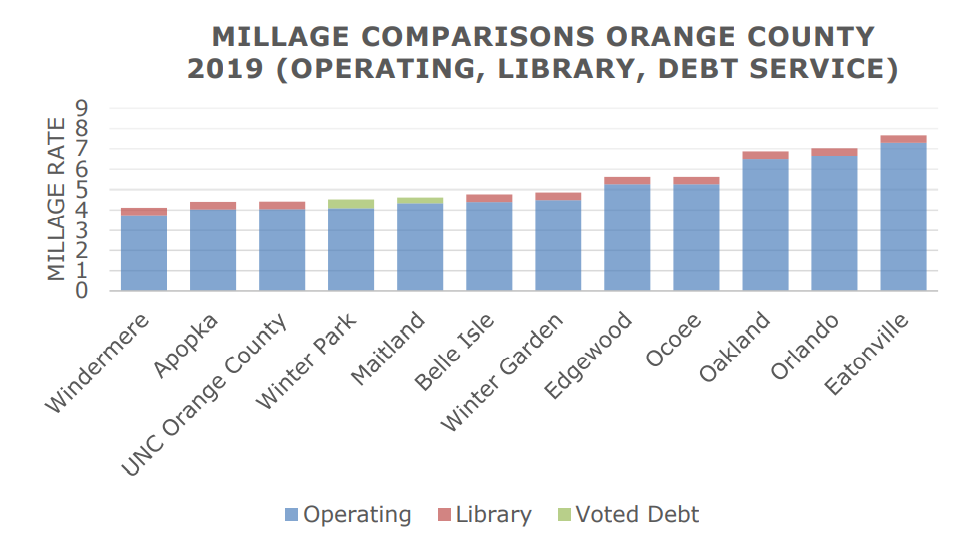 What does this mean for us?

The chart below illustrates the impact a rise to the current Winter Park millage cap would have on the average Winter Park homeowner. (This does not include increases from the other four taxing entities.) The chart was prepared by Finance Director Wes Hamill and Assistant City Manager Michelle Neuner.

There is still much we don’t know about FY 2021projections, and these are very uncertain times. “If you asked us to guess on a hurricane, we’d be pretty good,” said Michelle Neuner. “This year, in a pandemic, it’s a little tougher.”