Coming to a Winter Park Neighborhood Near You 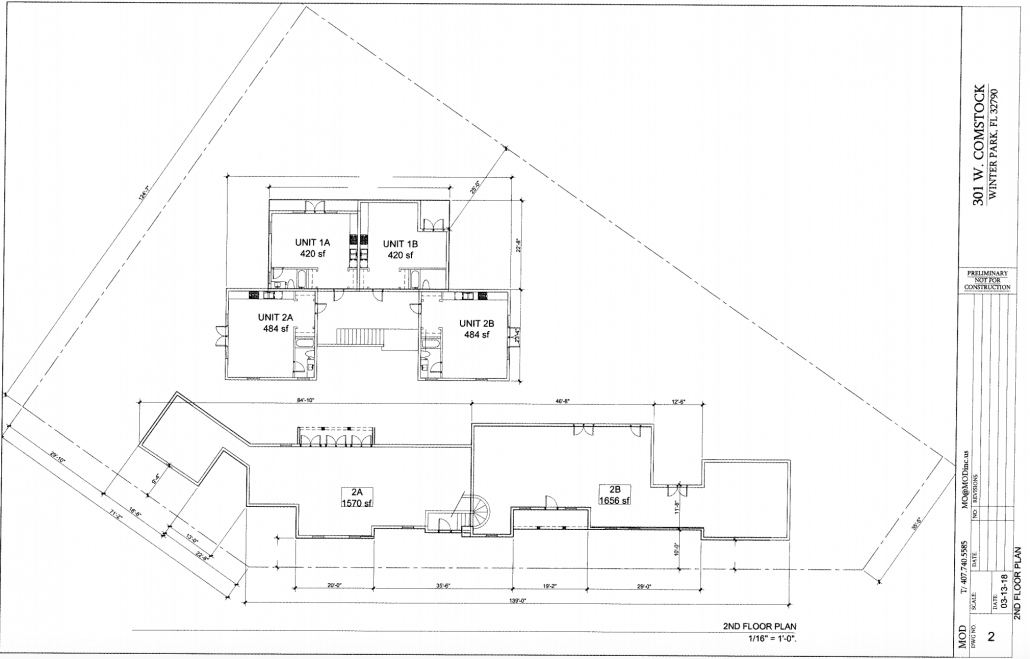 On Monday, April 23, developer Dan Bellows will ask the Commission to grant conditional use and associated variances for a rental apartment complex on the property at 301 W. Comstock – formerly City property known as the Blake Yard.

Each of the four rental units will have its own detached two-car garage with a 420- to 480-square foot “accessory living space” above it. To the casual observer, that would be a garage apartment. So, are there four apartments or eight?

Blake Yard sits between the Grant Chapel, the railroad tracks and the Lyman Avenue Villas. The property is easily accessible to Park Avenue via the new walking path on the tracks. The long promised silent train crossings, now under construction, further enhance the desirability of this lot.

About a year ago, the City saw a chance to cash in on Blake Yard. City reserves were at a low ebb at the time and needed bulking up, so it seemed an opportune time to issue a Notice of Disposal (NOD). According to the NOD, the property would be zoned R-2 and allow a maximum of four units. The property appraised at $450,000.

The sale of city-owned property usually goes through a rigorous review process. After all, city staff and the Commission have a responsibility to ensure the City is not negatively impacted and receives full benefit from the sale.

Round One — Monkey Business at City Hall

The disposal of the Blake Yard property came before the April 10, 2017 Commission meeting. Two parties, Dan Bellows as Winter Park Redevelopment Agency Ltd., and Rowland and Co., with architect Phil Kean, submitted competitive bids for the property. Both bids were below the appraised value.

After lengthy discussion, the Commissioners decided not to accept either bid and asked Planning Director Dori Stone to negotiate with the two bidders to see if one or both would agree to meet the appraised value. Stone would then bring the issue back before the Commission at the next meeting on April 24, 2017.

Round Two – Back to the Drawing Board

At the April 24, 2017 meeting, following the second phase of the bidding, Dori Stone recommended that the property be sold to Bellows’ Winter Park Redevelopment Agency, Ltd. because he was the highest bidder by $1,000.

The commission was headed in that direction until Rosemary Hayes, the attorney for Rowland & Co., disclosed some information she had gotten from a public records search. She found that on Friday, April 14, 2017, before close of bidding, Rowland & Co. had bid $455,000. Bellows had submitted a bid that offered “$450,000 OR $1,000 higher than another bid.”

City Manager Randy Knight emphasized that all communications between Bellows and City staff occurred after the bidding was closed. Rowland & Co. and their attorney were not party to any of these communications, however.

On a motion to approve Bellows’. bid of $456,000, Mayor Leary and Commissioner Weldon voted yes. Commissioners Seidel, Sprinkel and Cooper voted no. The motion failed and the project was sent back out for bids.

Finally, at the May 22, 2017 meeting, the Commission voted 3-2 to sell the property to Bellows’ Winter Park Redevelopment Agency Ltd. for $481,000. Cooper and Seidel voted no, but this time Sprinkel joined Weldon and Leary to approve the sale.

The sale received final approval on second reading at the July 24, 2017 Commission meeting.

A New High in High-Density Living

In April 2018, Bellows’ plans for the old Blake Yard sailed through Planning & Zoning on a unanimous vote to approve.

Bellows is seeking to introduce a new model for high density living in Winter Park. In the style of the James Gamble Rogers-designed Barbour House Apartments, Bellows plans to build four rental apartments, each with a detached two-car garage – and each of those two-car garages sports a second-floor “accessory living space.”

According to code, the scale of buildings in R-2 should blend in with the neighborhood, in this case, single family homes and duplexes. Bellows’ proposed four-unit apartment building is hardly in keeping with either the adjacent Lyman Avenue Villas or the single family homes on Comstock.

Staff thinks the apartment building blends right in. Evidently Planning & Zoning did, too.

The Neighbors? Not So Much

Since this project requires a conditional use, neighbors’ concerns should have been addressed. Were they? No.

Despite the fact that the neighbors met with City staff to voice their concerns, hired an attorney and showed up in force at the P&Z meeting, their pleas fell on deaf ears. The neighbors should have kept their money and saved their effort.

Neighbors say the scale of the building is a problem. They worry about the variance Bellows received to place his looming building three feet closer to the new bike path than code allows.

Additionally, Bellows must take two valuable parking spaces from Grant Chapel — now Hudson’s Event Venue — to access the apartments from Lyman. The Chapel didn’t have enough parking in its old use. In its new incarnation, the event center is woefully under-parked.

And Those Garage Apartments?

No Subletting? No AirBnB? Then What’s the Point?

The neighbors weren’t buying it — and you shouldn’t either. Subletting is more than likely. The garage apartments will make the rental price on the main apartments much more palatable if the tenant sublets or runs an AirBnB. Any way you look at it, the density will double.

There is no Enforcer

If the units were Condos, with a proper Home Owners Association, perhaps the owners would police each other to prevent illegal subletting, but as rental units, there are no controls.

The neighbors are justifiably concerned about the “double density” of this project. Parking is inadequate for eight units. Residents and their guests will be forced to use nearby streets — Lyman and Comstock.

There is Still Time to Show Your Support – Monday, April 23

This project comes before the Commission on Monday, April 23. Please help stop this green-lighting of ill-conceived projects by the City, the Staff and Planning & Zoning.

If this level of density is allowed in one neighborhood, every neighborhood in town is vulnerable. We are all in this together. Let your voice be heard.

Write to MayorandCommissioners@cityofwinterpark.org, to ask them to reconsider their decision, and show up at the meeting on Monday, April 23rd.