Every Day Is Training Day

Every Day Is Training Day

Outside, the morning is cool and sunny but inside, the old building at Progress Point is eerily dark, quiet. Suddenly, four fire fighters, each wearing 50 to 60 pounds of gear and carrying another 25 pounds of tools, burst into the room like figures in an action movie. They wear hoods and cannot see. They make plenty of noise. They conduct a quick “right hand search,” with two men proceeding into the room keeping their right hands on the wall. A third officer carries a Thermal Imaging Camera that is sensitive enough to detect the warmth from a fire fighter’s hand print on the wall. This is how they see. 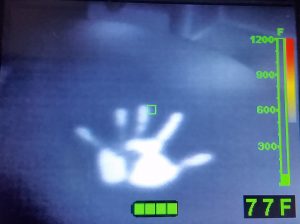 The officer with the camera directs the men as they crawl under and over furniture, searching for fire and for victims. One of the obstacles they encounter is a “tangle tunnel.” A long plywood tunnel crisscrossed with wires and cords, the tangle tunnel replicates what a fire fighter would have to deal with if a ceiling has burned, leaving wires and fixtures dangling. The fully loaded fire fighter must crawl, blindfolded, through the 10-foot long space with his body at an angle to ensure the air bottle he carries on his back does not get hung up in the wires.

“We are frequently called at night,” explains Jimm Walsh, Division Chief of the Winter Park Fire-Rescue Department, “and if there is smoke — even in daylight — we can see nothing. So this is how we conduct our drills.”

Progress Point Being Put to Good Use . . .

Winter Park Fire – Rescue has set up their training facility in the old call center building at Progress Point on Orange Avenue. It is used not just by Winter Park, but also by other area fire companies, including Orlando.

. . .As Is Some Previously Used Furniture

Using furniture and fixtures gleaned from defunct businesses and a few alleys, Fire Rescue training folks have created a mockup daycare center, a living room, an office, a child’s bedroom with bunk bed, and a playroom with toys. The tangle tunnels are placed at random. Amongst the jumble of furniture are mannequins – sand-filled “victims,” some child-size and some weighing as much as 220 pounds – dead weight that must be dragged to safety amidst chaos.

Firefighters at the Ready 24/7

Winter Park has 69 active firefighters (not including administrative personnel) — three women and 66 men. Of the 69, 57 are trained paramedics. Walsh estimates that 70 percent of their calls are medical emergencies. The remaining 30 percent he describes as “other” – fires, automobile accidents, hazmat and other types of emergencies. The department works a three-shift system, with firefighters on duty for 24 hours and off 48 hours. Each shift is covered by 23 firefighters.

Winter Park Fire Rescue is the sole provider of emergency medical services within the city limits. Units respond from three fire stations, strategically located to cover the nine-square-mile area of Winter Park. The main station is on Canton Avenue, and the other two are located on Lakemont Avenue and Howell Branch Road. The department has two fully equipped ambulances, and while fire trucks cannot transport a patient to the hospital, each is equipped to provide advanced life support until an ambulance arrives.

Each firefighter must complete a minimum of 20 hours of training a month. Most complete more than that. The array of knowledge required of a firefighter is, dare we say, awe-inspiring. In addition to knowing how to operate their equipment, drive the vehicles, practice the latest firefighting techniques and the latest medical emergency procedures, there is an ever-changing list of new information and equipment with which they must familiarize themselves.

“We are trying to build muscle memory,” said Jimm Walsh, “so that in an emergency situation, these people don’t have to think. They just act. It saves seconds, and seconds can save lives.”

They Know WP Like the Backs of Their Hands

Every firefighter must know the location of every single street in Winter Park. Even though the units have Siri to tell them where to go, technology can fail, so the firefighters must be able to demonstrate their knowledge of the area without technical assistance.

Firefighters study detailed engineering drawings of every commercial and multi-residential building in the city – and there are thousands of them. They learn the interior layouts, how to disable the alarm systems, where to turn off the electricity, where to turn on the water and the location of all fire hydrants in the vicinity of each building.

All this effort has paid off. In 2013, after an on-site examination from the Insurance Services Office (ISO), the WPFD received a Class 1 rating – the highest possible. Criteria for the rating are community water supply, emergency communications (911) and the fire department itself.

Within the Fire Department, the areas evaluated include daily staffing, fire apparatus, training, equipment and pre-fire planning. WPFD is one of only three departments in the U.S. to receive Class 1 accreditation from the ISO. The classification is used by insurers to rate the risk of loss, which affects premiums paid by property owners.

Winter Park is a wonderful place to live. Everyone says so. So much goes on behind the scenes to make it that way. Thanks to these folks for looking out for us – 24/7.