Free Vaccinations at the Farmer’s Market

Free Vaccinations at the Farmer’s Market

The City of Winter Park is partnering with the Orange County Health Department to provide COVID-19  vaccinations at the Farmer’s Market this Saturday, July 17th.  Vaccinations are available free of charge to Winter Park residents and guests 12 years of age and older.

Free grocery coupons for the first 50

The first 50 people to receive a vaccination will also receive a $10 grocery coupon.

On Saturday, July 17, Health Department personnel will be offering first doses of the Pfizer vaccine. They will also have limited quantities of the single-dose Johnson & Johnson vaccine. If you get there early, you can choose which you want to receive. The City of Winter Park will have standby medical personnel on site.

On Saturday, August 7, medical personnel will administer for 2nd doses of the Pfizer vaccine and will, again, have limited amounts of the single-dose Johnson & Johnson vaccine.

Winter Park Mayor Phil Anderson said, “We are happy to partner with the Florida Department of Health in Orange County to bring vaccinations to our community. We want to make it as easy as possible for everyone to protect themselves during the challenges we’re experiencing with COVID-19.” 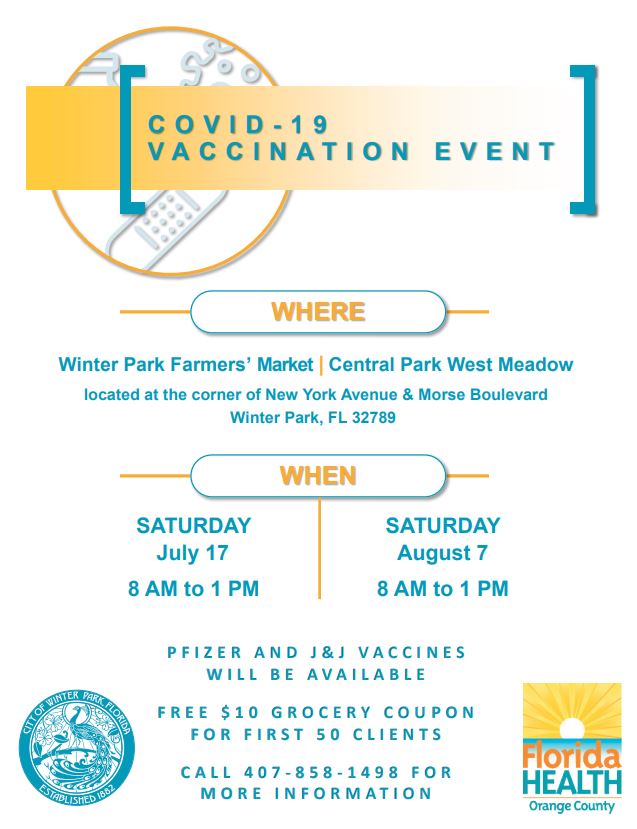