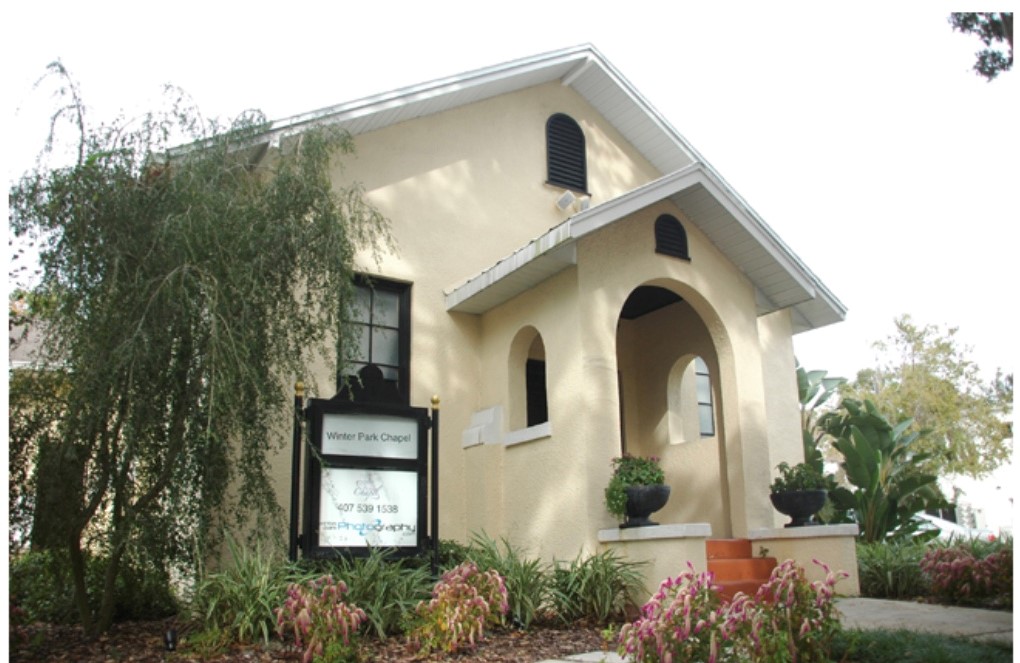 Hannibal Square developer Dan Bellows has managed to obtain the City’s okay to operate a commercial enterprise in a building zoned O-2 (office). Since the matter has not been before either the Planning & Zoning Board or the City Commission, one can only conclude the approval came through City staff.

According to the Friends of Casa Feliz website, Grant Chapel was built on Winter Park’s West Side in 1935 and served as a house of worship for the predominantly African American population for almost 70 years. When the congregation outgrew its location, Bellows recognized the development potential of its prime Hannibal Square location and purchased the building.
https://friendsofcasafeliz.wordpress.com/tag/winter-park-history/

For a few years, Bellows rented the property to Suzanne and Steve Graffham, who operated it as the “Winter Park Wedding Chapel.” They ran a photo studio and used the chapel primarily for destination weddings.

Grant Chapel on the Move

In 2013, Bellows struck a deal with the City to move Grant Chapel from its original home on New England to its present site on Lyman Avenue close to the railroad tracks and across from the Farmer’s Market. At the time, Bellows assured the Commission that if they up-zoned the Lyman Ave. Chapel property from R-1 to O-2 (office), he would place the Chapel on the Historic Register as soon as the move was completed.

Delighted, the City Commission approved the Chapel’s R-1 zoning change to O-2. Its use as a wedding chapel and photo studio fit neatly into O-2 zoning. It looked like another historic Winter Park property was saved from the wrecking ball in the “move-it-or-lose-it” historic preservation strategy of those days.

A funny thing happened on the way to the Historic Preservation Board, however. After its December 2013 move, the chapel was remodeled to include the addition of a basement with two staircases descending from the front façade. The landscaping on Lyman featured elaborate hardscaping, in stark contrast to the humble leafy lot where the chapel originally stood. By the time Bellows’ application reached the Historic Preservation Board (HBP), the board refused to add Grant Chapel to the Historic Registry.

Another ‘Golden Egg in an Unguarded Nest’

And once a listing in the historic registry was no longer a consideration, Bellows made even more changes to the building. Meanwhile, the historic landmark has been lost.

Now, Grant Chapel has been rebranded as Hudson’s Chapel & Cellar in Hannibal Square. This facility is prominently advertised in the newspaper and on its website as a “stunning venue for any event.” The website proclaims Hudson’s is suitable for parties of up to 60 guests, with catered food and beverages. While wedding ceremonies are welcome in the Chapel, Hudson’s promotes itself as perfect for all types of events — holiday parties, corporate events, birthday celebrations, etc.

But, wait. Hudson’s Chapel and Cellar, greater than its original size and with no additional parking, is still zoned O-2.

According to the City’s Land Development Code, (Sec. 58-73,) O-2 zoning means offices. There is a very short list of permitted uses. When the Commission approved the O-2 zoning, they were given to understand that the intended use of Grant Chapel was as a Wedding Chapel and photography business – two uses that fit neatly within 0-2 zoning.

Types of business that are not permitted in buildings zoned O-2, because of the potential to disturb the neighbors, are “private and semi-private clubs, lodges, halls, and/or social centers and restaurants or lounges.”

City approval of Mr. Bellows’ use of Grant Chapel as an event and party venue in O-2 zoning clearly requires up-zoning to C-1 (commercial). Hudson’s is now a Commercial Establishment . . . on West Lyman Avenue, which the Comp Plan says is to remain forever residential.

City Manager Randy Knight stated the Commission knew they were approving a party and event venue when they gave approval for the then-Winter Park Wedding Chapel to operate from the Lyman Avenue location as part of the O-2 zoning process.

Even Though There Was No Public Notice

Hudson’s Chapel already has minimal parking – parking that any city official, elected or otherwise, who has a critical eye might find inadequate for an event venue with a capacity of up to 60 guests. . .parking that will be further eroded by Bellows’ upcoming development of the Blake Yard property.

Bellows has hijacked Grant Chapel once. Shame on him. If we let him hijack it again, shame on us.

mayorandcommissioners@cityofwinterpark.org
Contact your elected representatives to insist that the use of Grant Chapel remain consistent with its 0-2 zoning.

Jan Hommel is a resident of the West Side neighborhood of Winter Park.