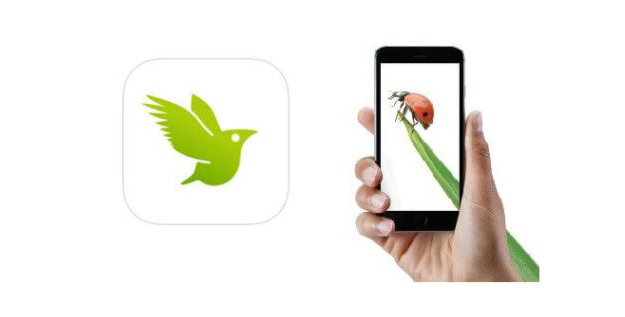 Walking around our neighborhood the other day, on the outskirts of Mead Botanical Garden, I spotted a couple of bright red fruitlike things growing on a scraggly vine in a stormwater ditch. They looked sort of like plum tomatoes but were tinier than my thumb. So I took a photo and uploaded it into my trusty sidekick of late – the iNaturalist app.

I’m not typically an app-grabbing kinda guy. Why accumulate more attention-sucking novelties when life is too cluttered as it is?

But the iNaturalist app? It’s free, and it’s one of the coolest things going. Especially, if like me, you enjoy walking around Winter Park, traipsing through our parks and along our lakes, taking in all the gorgeous stuff that deserves to be taken in and, much of the time, having absolutely no idea what you’re looking at. With iNaturalist, all you do is take a photo, load it into the app-osphere and up pops, if not a definitive i.d., then at least a solid suggestion based on similar sightings and reviews by a community of bona-fide naturalists, botanists, zoologists and scientists of every sort.

More important: the iNaturalist app is an essential tool if you’d like to join in the upcoming City Nature Challenge (April 30-May 3), an international survey of urban biodiversity that Winter Park will be taking part in this year for the first time.

Let me put that in stronger terms: Sign up! Join in! Because keeping track of what’s living around us now will help determine how we all live in the future.

“Truth is, most of us don’t know and appreciate the pieces of nature that are all around us because our urban parks and green spaces are too often overlooked,” says Bob Bendick, of the Winter Park Land Trust, which is helping to organize identification of as many plant and animal species as possible within Winter Park as part of the City Nature Challenge. “Greenspace in cities is important habitat for a diversity of plants and animals.  Discovering that gives added meaning to our enjoyment of the outdoors and added direction to the conservation of our open space here in Winter Park and in other cities”.

What is the City Nature Challenge?

Launched in 2016 as a friendly competition between Los Angeles and San Francisco to see which city could tally the most sightings of plants and animals, the City Nature Challenge has grown into a worldwide event with tens of thousands of participants – most of them rank amateurs, like myself. Despite restrictions from Covid-19, the 41,000 participants in the 2020 City Nature Challenge still managed more than 815,000 observations and identified some 32,000 different plants and animals, plus 1,300 rare or endangered species. And this year, Winter Park and the rest of Orange County will join more than 300 participating cities around the world, from Adelaide, Australia to Zagreb, Croatia with places like Kisumu, Kenya and Tulsa, Oklahoma in between.

“Information collected during the City Nature Challenge will provide baseline data that will help form conservation and development guidelines for years to come,” says Christianah Oyenuga, of the Nature Conservancy in Florida, who is helping direct overall efforts in Orange County as part of the City Nature Challenge. “We count on community members of every age and background – our citizen scientists – to get out there and let us know what they see.”

In Winter Park, volunteers in the City Nature Challenge will be roaming around a half dozen parks and green spaces taking photos of what they see over the course of the four-day event-– Mead Botanical Gardens, Martin Luther King Park, Howell Branch Preserve, Kraft Azalea Gardens, and Lakes Virginia and Mizell.  A team from Rollins College will be searching the Genius Preserve which is not open to the public. The City of Winter Park’s Parks Department is encouraging this survey and helping to support the City Nature Challenge event. To sign up, go to https://www.inaturalist.org/projects/city-nature-challenge-2021-orlando-metro

“Winter Park residents are particularly sensitive to maintaining and improving the quality of life that we enjoy here. The City Nature Challenge is a great way for people who love Winter Park to take part in something that will add to the long-range vision, inform our elected officials and help guide our city,” says Steve Goldman, chair of the Winter Park Land Trust board of trustees.

Using the iNaturalist app, I’ve discovered that among the many non-descript “weeds” that might otherwise go unnoticed on my walks is Calyptocarpus vialis, which has recently begun sporting the dainty yellow flowers that contribute to its common name – Straggler Daisy. And that strange pink earthworm I plucked from the caladium bed last week? Turns out it was actually a Florida Worm Lizard (Rhineura floridana.) They are the last living members of a family of legless, burrowing lizards that eat spiders and termites and are found only in Florida. Let’s just say, I didn’t put it on a hook and go fishing with it.

As for the bright red fruitlike things I spotted in the stormwater ditch? The jury is still out on that. “We are not confident enough to make a recommendation, but here are our top suggestions,” the iNaturalist app told me before going on to list a few possibilities – a Butcher’s Broom perhaps, or maybe a Christmas Berry. For now, though, I’m content to let it remain a mystery. It makes those walks around the neighborhood all the more interesting.

For more information about the City Nature Challenge and to sign up, please visit  https://www.inaturalist.org/projects/city-nature-challenge-2021-orlando-metro

or contact Bob Bendick at the Winter Park Land Trust at rbendick1@gmail.com.