Yellow Signs are Back 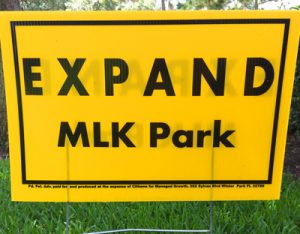 Yellow signs are popping up everywhere, urging the City not to sell the bowling alley site at 1111 W. Fairbanks, rather, to use it to expand Martin Luther King, Jr., Park.

The final vote will likely be at the Commission meeting on June 12. The meeting begins at 3:30. Public comment is usually taken around the 5:00 hour. Click here for the meeting agenda.

The old bowling alley property has a checkered history. In late spring 2013, Rollins purchased the property when it looked like Harper-Shepherd Field would become a Minor League baseball stadium and no longer would be available to Rollins teams. Being contiguous with Martin Luther King, Jr., Park, the property was ideal for Rollins to expand their playing fields.

Editor’s Note:  According to Communications Director Clarissa Howard, Rollins purchased the bowling alley property for use as a lacrosse practice field. She said the purchase was unrelated to Minor League baseball at Harper-Shepherd Field.

When it became clear that baseball would not be coming to Winter Park, however, Rollins no longer needed expansion room and put the property up for sale. UP Developments, LLC, contracted to buy the property from Rollins.

But the City wanted the property, too. At the time, they had their own ideas about expanding MLK Park and mitigating some of the traffic problems on Fairbanks and 17-92. In the fall of 2014, Scott Fish of UP Developments, LLC, agreed to assign his contract with Rollins to the City, so that the City could buy the property from Rollins.

That deal didn’t work out, and Rollins ended up keeping the property until 2016, when the City bought it for $2.9 million.

Editor’s note: Ms. Howard pointed out that the City did not use park acquisition funds, but instead took money from the CRA and general fund reserves, thereby avoiding any requirement that the land be used as a park.

In the meantime, plans for the new library-event center took shape, the City created yet another vision of itself and the Comprehensive Plan underwent its seven-year cycle of massage and manipulation. The City organized plenty of public discussion around each of these activities.

Missing in these discussions was a consideration of the city’s assets as a whole – as a system. This was nowhere more evident than in the discussions about the City’s parks and greenspace — which brings us back to those yellow signs.

While the City was visioning and planning, the turf and facilities at the playing fields on south end of the MLK Park were deteriorating, and the bowling alley property stood vacant. Since the bowling alley was creating something of an eyesore on a major gateway artery, someone decided the City should have a plan — so GAI Consultants were retained to create one.

At the April 10 meeting of the Community Redevelopment Agency (CRA), which is made up of the Commissioners and a representative from Orange County, Hal George, GAI made a presentation about their plans for creating a Master Plan. At that meeting, the Commissioners also decided to sell the bowling alley property, retaining only a right-of-way for a turn lane on Fairbanks.

Why Sell the Bowling Alley?

According to Commissioner Peter Weldon at the April 10 meeting, “Selling the bowling alley property now gives us the opportunity to do things that are much more tangible and beneficial to the City,” – like a third story on the new library-event center parking garage, or a parking garage downtown. “For one-third the money we have into [the bowling alley] land today, we could provide 100 parking spaces to expand the parking for MLK Park,” said Weldon.

Commissioner Greg Seidel said the proposed sale needed more public discussion. Commissioner Carolyn Cooper agreed, requesting the item be tabled until there had been opportunity both for public discussion and for consideration by the Parks & Recreation Advisory Board, which had not had a voice in the decision to sell.

She pointed out that the City seldom had access to land contiguous with an existing park – and in this case, the City already owns the land. Once the land is gone, we can’t get it back.

The motion to table, or postpone the sale, failed on a 3-2 vote, with Cooper and Seidel dissenting.

Cooper made a second motion to approve the sale contingent upon completion of the designs for the library and for MLK Park. That motion also failed on a 3-2 vote.

The motion to approve the sale of the property, minus the right-of-way for the turn lane, passed on a 3-2 vote, with Cooper and Seidel dissenting.

MLK Master Plan Rolls Out the Next Day

The next night, April 25, close to 100 people gathered at the Rachel Murrah Civic Center to discuss the Master Plan for part, but not all, of MLK Park. The GAI consultants explained that the bowling alley property and the new library-event center were not part of the discussion. Groups of people gathered around tables and used maps of the park and construction paper cutouts representing different types of public spaces to illustrate their visions of the park.

“Fix the Park and Don’t Sell the Bowling Alley”

As the various tables prepared to report out to the group as a whole, two things became clear. First, each table said they wanted the existing park facilities, especially the playing fields and water features, to be cleaned up and repaired. It would be okay, they said, to leave the rest of the park alone – just fix what’s there. “And don’t fill it up with shiny new stuff,” they said.

Second, participants opposed the sale of the bowling alley property. “Wait,” they said. “We don’t even have a completed design for the new library. What if we need that land? It’s too soon to decide what to do with it.”

Did the Master Plan Take a Wrong Turn?

GAI held a second meeting at the Civic Center on May 2. Only 25 to 30 people came, many of whom had attended the April 25 meeting. Again, the over-arching themes included the desire to repair existing park facilities and opposition to the sale of the bowling alley.

Asked if the outcomes of the two meetings would be reported back to the City, the GAI consultant replied that they “hadn’t heard from everyone yet.”

Additional meetings were to have been held in May, with a final plan due in July. According to Communications Director Clarissa Howard, the schedule for public meetings has been revised, and the next public meeting will be sometime in July.

Howard reported that GAI has, however, held focus group meetings that included “moms, sport coaches, daycare nurseries, realtors, staff and other professions.” These meetings were not public, said Howard, nor was public notice required.

“GAI will compile this input from the public forums and the focus group meetings into preliminary conceptual rendering to be presented at the meeting and on site walk planned in July,” wrote Howard.

Comments opposing the sale of City land are too numerous to count, but there were some articulate ones on the subject of MLK Park and the bowling alley sale. While commenters were respectful, their comments indicated an underlying disconnect between Winter Park’s citizens and their elected officials.

In a letter to the Mayor and Commissioners dated May 10, Winter Park resident Bob Bendick wrote: “Winter Park has tended to discuss each of its parks in isolation . . . . Far more functional, and a characteristic of communities with the most successful public open spaces, is to think in terms of a system of parks and greenways that meets active and passive recreational needs and forms a green framework for the city’s future.”

Bendick went on to propose “that Winter Park move quickly to integrate its parks, lakes, greenspace, pedestrian and bicycle planning into a single document that describes a connected network . . . .” The plan will only be worthwhile, wrote Bendick, “if there is reliable funding to carry it out. And this is where Winter Park can do better.”

Bring Parks & Rec into the Loop

It is worth noting that at the May 24 meeting of the Parks & Recreation Advisory Board, Vice Chairman Julio de Arcos asked Parks & Recreation Director John Holland if anyone had sought his input on selling the bowling alley property. Holland replied that no one had. Advisory Board members expressed their opinion that the land should not be sold at this time.

Members of the public attending the Parks & Rec meeting requested the board write to the Mayor and Commissioners to express their concern about the sale of the property. According to an email from John Holland to one of the attendees, “The Parks and Recreation Board Chair has written a draft letter to the City Commission and we are currently getting approvals on format and verbiage.”

The sale of public land requires two votes by the Commission. The bowling alley sale will likely come up at the next Commission meeting on June 12. Any one of the Commissioners on the winning side of the vote to sell – Leary, Sprinkel or Weldon – can re-introduce the matter for the purpose of changing their vote. Click the email address to let your elected representatives know how you feel about stewardship of public land. MayorandCommissioners@cityofwinterpark.org 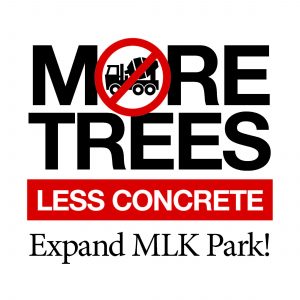