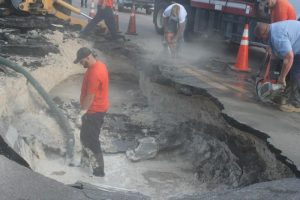 This was the scene about 4:15 pm on Fairbanks Avenue across the street from Linda’s Diner. A water main beneath the roadway burst, and the resulting hole swallowed a large chunk of Fairbanks Avenue. Winter Park Police Officer Greg Easterbrook, who was at the scene, said the east-bound lanes of Fairbanks between I-4 and Harold St. would be closed “for at least six to eight hours, perhaps more.”

Officer Easterbrook said he had received a call that the road was flooded. He said he responded, “and sure enough, a large hole had opened. Fortunately,” said Easterbrook, “this happened on a Sunday instead of during Monday rush hour.”

Crews will remain on the scene until the roadway repair is complete.