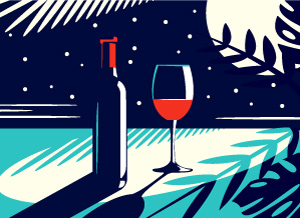 Last call for alcohol in Hannibal Square could soon stretch to 2:00 am, but people drinking after 10:00 pm will have to keep things down to a dull roar.

Hannibal Square restaurateurs, particularly Vincent Gagliano of Chez Vincent, have for years tried to persuade the City to bring the rules on last call into line with those governing the rest of the City. Currently, closing time in Hannibal Square is 11:00 pm Sunday through Thursday and Midnight Friday and Saturday. Closing time on Park Avenue and in the rest of the City is 2:00 am Monday through Saturday and Midnight on Sunday.

Gagliano and other restaurateurs complain that the 11:00 pm closing requirement sends Hannibal Square clientele over to Park Avenue to continue their revels, costing Hannibal Square establishments hours of potential business.

In 1995, when the CRA revitalization of New England Avenue and Hannibal Square began, area residents at the time were concerned about noise from bars and restaurants.

While the CRA’s goal was to create a restaurant district but not a bar and nightclub district, one of the first establishments to locate in Hannibal Square was Dexter’s, where live music was an integral part of the business model. Bands played on week nights as well as on weekends and sometimes, in nice weather, they played outside. In deference to the neighbors, the City established earlier closing hours and strict noise controls for Hannibal Square.

According to City Planner Jeff Briggs, back in the 1980s, Park Avenue also had a noise problem in the evenings. The solution was an ordinance that created a violation if one could hear the sound from 50 feet away from an establishment. The ordinance recommended by P&Z prohibits “any person, business or establishment between the hours of 10:00 pm and 7:00 am to make noise that unreasonably disturbs the peace” and that is “. . .in excess of 50 dBA as measured with a sound level meter inside any receiving property.”

What this means is, if someone’s peace is being disturbed, he or she can call the police, who will bring their sound meter and, if the noise exceeds 50 dBA, ask the offending party to quiet down.

What’s in a Decibel?

Decibel levels, or dBA measurements, are meant to approximate the way the human ear hears sound. According to a local engineer familiar with this issue, a jet engine is 100 to110 dBA, a motor cycle with straight pipes produces 90 dBA, a vacuum cleaner about 70 dBA, normal conversation level in a restaurant is 50 – 60 dBA and a whisper is around 30 dBA.

Next Step is the Commission

As with any ordinance, there will be two hearings by the Commission. As of this writing, no date has been set.