At the November 9 Commission meeting, City staff brought forward a draft ordinance with referendum language asking Winter Park voters to approve a bond not to exceed $30 million, to be paid back over a period of 20 years, for the purpose of building a combined library — civic center complex. The referendum will appear on the March 15, 2016, ballot.

According to City Manager Randy Knight, the financial impact on each property owner will amount to $49 per year per $100,000 of assessed valuation. Assuming the average value of a home in Winter Park is around $400,000, the owner of that home would pay, at most, an additional $196 per year in property taxes.

Adoption of the ordinance requires two readings. The second and final reading will be at the November 23 Commission meeting.

If the Winter Park voters decide in March to build a combined library – civic center complex, it will in all likelihood be located on Morse Blvd. at the site of the present Rachel Murrah Civic Center.

John Cunningham, design partner of the consulting architectural firm ACi, presented the report to the Commission October 26, and the Commission voted unanimous approval at that meeting. The report was based on more than a year’s study, dozens of task force meetings, eight public forums and countless individual meetings with Winter Park citizens. Cunningham stressed that the report describes a concept for a new combined library and civic center. The actual building design will be determined by the architectural firm hired by the city if the referendum passes. 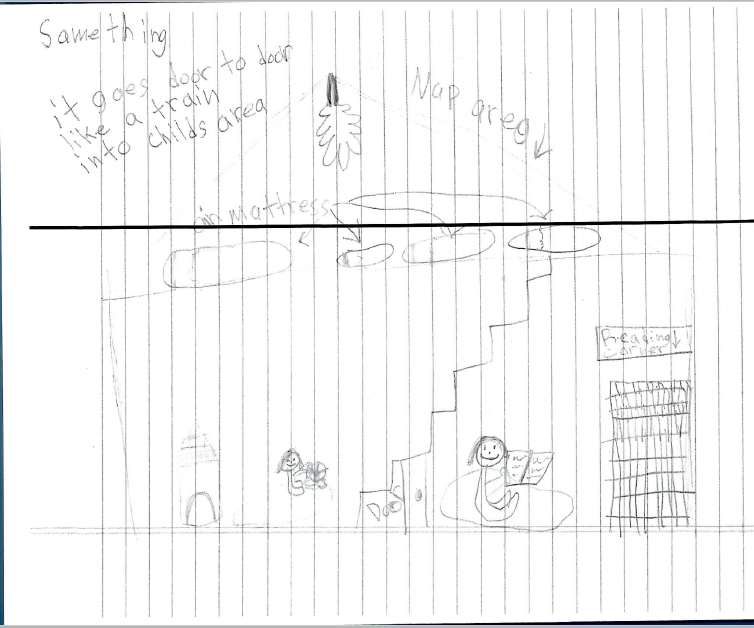 Elements of ACi’s conceptual design are rooted in ideas that emerged during public workshops August 22 – 23. Some of the most innovative of these came from children who accompanied their parents. At right, a Winter Park fourth grader suggests a nap area where small children can sleep while their mothers read or study.

Another fourth grader describes a library with “Relaxing, calm, and soothing areas to quietly read and let your imagination take the words from the book and make it into something amazing.”

One child’s Notion of What a Third Place Should Be

“Environments that make me feel safe and secure inside a great place to learn and explore and have fun.” 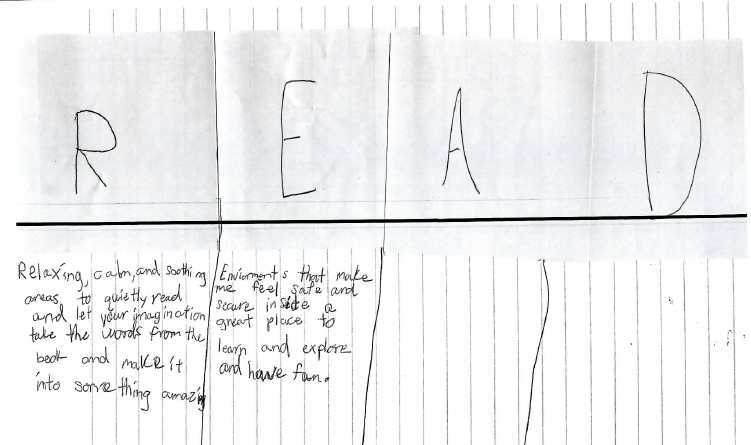 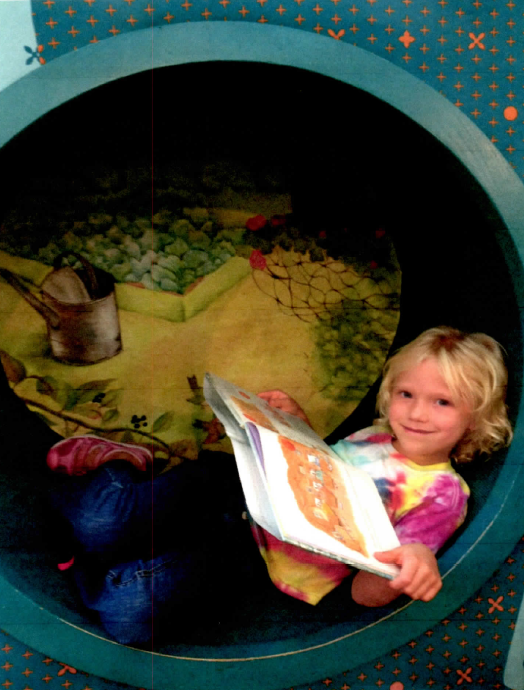 Dr. Jonathan Miller, Director of Olin Library at Rollins College, agrees. “The most important feature of any library,” he said, “is its community – the people it serves.” Miller said the idea of the Third Place came from Ray Oldenburg, PhD, an urban sociologist from Pensacola, FL, who published a book in 1991 entitled The Great Good Place, about the importance to a community of informal public gathering places.

According to Dr. Oldenburg, the First Place is home; the Second Place is work; and the Third Place is where one chooses to be when he or she is not at home or at work. Oldenburg argues that these Third Places – coffee shops, bars, general stores, and libraries — are central to local democracy and community vitality.

Miller described Olin Library, which is designed to serve the academic community at Rollins, as a place of “collaboration, contemplation and community.” Miller said there is complete reciprocity between Olin and the Winter Park Public Library, and that anyone with a WP library card may use it at Olin.

Asked about the prospect of a new combined public library and civic center for the city, Miller deferred to Winston Churchill, who said, “We shape our dwellings and afterward, our dwellings shape us.”