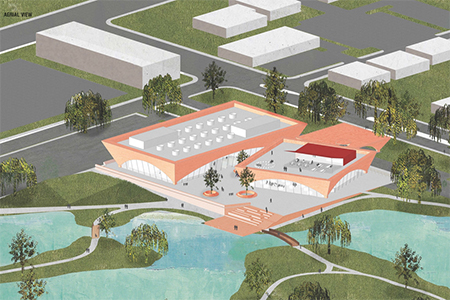 City commissioners charged ahead this week with final approval of the site plan for their new library and civic center, despite an advisory board’s concerns.

Earlier this month, the city’s planning and zoning board opted for only preliminary approval of the project because unanswered questions remained, especially about stormwater drainage.

The 4-1 vote on Monday to approve the site plan included Commissioner Greg Seidel, a civil engineer, in the majority. He said he reviewed the stormwater plan and “didn’t see any deal breakers.” Commissioner Carolyn Cooper, who raised questions about the cost of dealing with some of the project’s risks, voted against the site plan.

Commissioners did endorse one recommendation from their advisory board: They agreed to consider tearing down the Lake Island Hall recreation building to add 36 more parking places to the site plan.

Seidel’s support came with two suggestions that were not acted upon. First, he wanted the city to pre-treat the stormwater before it pours into the lake. At the very least, he said, the city should remove trash from the drainage. “It’s not that expensive.” Mayor Steve Leary declined to endorse the idea but didn’t rule it out. “I’d want to know how much that would cost,” Leary said.

Second, Seidel proposed putting a parking garage at the southwest corner of the site where a parking lot is planned, using non-library funds to build it. He noted that a garage there wouldn’t interfere with the look of the two new buildings and could serve area businesses and park users as well. More importantly, he said, it would make sense to build the garage with CRA funds intended for the redevelopment of the central business district. Commissioners were not enthused. “The parking issue won’t be resolved until we have experience with the facilities,” Commissioner Pete Weldon said.

Commissioners felt comfortable ignoring their advisory board after city Planning Manager Jeff Briggs said that board was “not as familiar” with the site-plan issues as city commissioners were. “There doesn’t appear to be a lot of logic bringing it back” to the board after the Saint Johns River Water Management District reviews it, Briggs said. The district in the next few weeks will decide whether to permit the city’s proposal to channel stormwater overflow from Lake Mendsen into Lake Rose, the site of the city’s huge 1981 sinkhole.

The total cost of many elements of the site plan remain unknown. That’s not unusual for developers, but the city lacks deep pockets for the project. Unknowns include, for example: the cost of tearing down the recreation building; the cost of trying to save even a few of the 63 protected trees targeted for removal; the cost of stormwater pretreatment; and the cost of removing more muck if necessary. The placement of the library and civic center had to be shifted after soil borings disclosed deep levels of muck on the site.
Cooper asked if the city has budgeted enough to deal with all the risks. “I’m fine accepting the fact that we can fix it with money. The question is how much [money] and should we?” Other commissioners did not share her concerns. If more costs arise, Weldon said, “trade-offs will have to be made,” as happens to “any developer.”