Despite City attempts to erect roadblocks, the Save Our Library PAC announced today that it will move forward with its Citizens Initiative Petition to prohibit building a new library in Martin Luther King, Jr., Park.

Public Meeting Wednesday, May 11, at the Community Center

The Save Our Library PAC, led by Michael Poole, Sally Flynn, Charley Williams, former Commissioner Margie Bridges and former Mayor Joe Terranova, will host a public meeting: Petition forms will be available for citizens to sign and circulate.

In an email to Save Our Library PAC President Michael Poole, City Clerk Cindy Bonham stated in part: “The request for petition forms . . . is not timely, as the petition forms you have requested . . . appear to constitute a reconsideration or referendum to repeal Ordinance No. 3020-15 and the City Commission’s decision to locate the library and events center in Martin Luther King Park . . . . Referendum petitions must be filed within 30 days after adoption of the ordinance to be considered.” (To view the entire email, click here.)

Ordinance No. 3020-15 is the Bond Referendum language that appeared on the March 15, 2016, ballot. It specifically omits any language pertaining to the intended location of the library/events center.

The request filed by the Save Our Library PAC was a Citizens Initiative Petition, not a Referendum Repeal. A group representative told the Voice they do not seek to overturn the bond referendum, nor do they seek to prevent the construction of a new library/events center/parking structure.

The group seeks to prevent a new library from being built in Martin Luther King, Jr., Park.

The Winter Park City Charter, Sec. 5.01. – Initiative, states: “The qualified voters of the city shall have power to propose ordinances to the commission and, if the commission fails to adopt an ordinance so proposed without any change in substance, to adopt or reject it at a city election.” No time limitation is specified.

In email correspondence obtained from the City, City Attorney Kurt Ardaman advises Cindy Bonham that she is under no obligation to respond to the citizens group, but he suggests possible wording of a message she might send to Michael Poole, if she concludes that the Petitioner’s Committee Affadavit constitutes a Referendum rather than an Initiative. 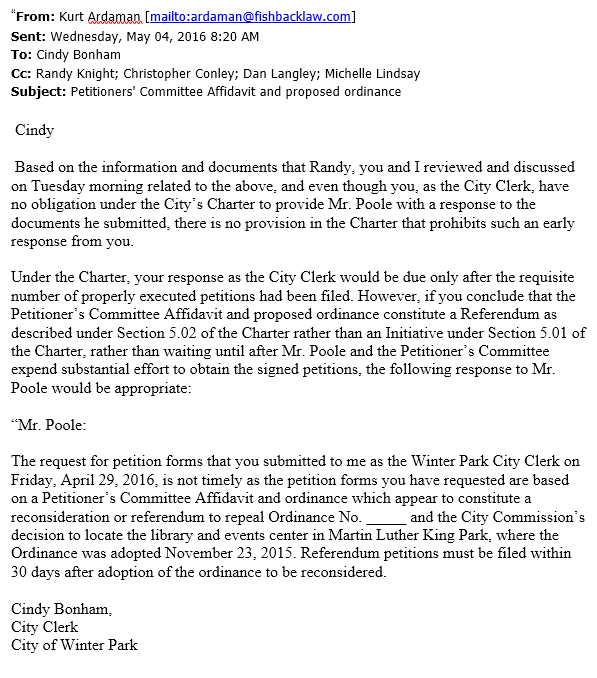 PAC President Michael Poole stated that he believes the City’s position is politically motivated. “This is just another attempt by government to suppress the citizens’ rights,” said Poole. “We are going ahead with our petition drive.”

Asked why she had concluded that the petition in question is a Referendum Repeal rather than a Citizens Initiative, City Clerk Cindy Bonham replied by email.
“Ms. Mooney:
The charter language.

Sec. 5.02. – Referendum
The qualified voters of the city shall have the power to require reconsideration by the commission of any adopted ordinance and, if the commission fails to repeal an ordinance so reconsidered, to approve or reject it at a city election.

The final decision to put the library/events center in MLK Park happened last October and was confirmed with the ordinance calling for a bond referendum that was adopted in November. The time to have made this challenge would have been within 30 days of that ordinance adoption in accordance with Section 5.02 and 5.05(d) of the City Charter.