The End of a Long Week

After two days and 16 and one-half hours of mind-numbing debate, public comment and amendment proposals, the Commission voted 3-2 to pass the ordinances creating the Orange Avenue Overlay (OAO).

The Thursday meeting, a continuance from the 11-hour session ending at 2:30 a.m. Tuesday, was a breezy six hours, lasting from 11:00 a.m. to 5:00 p.m. At the final vote, Mayor Leary and Commissioners Seidel and Sprinkel voted in favor of the OAO ordinances; Commissioners Carolyn Cooper and Todd Weaver cast dissenting votes.

Ordinance Will Have Second Reading at a Future Date

The ordinance changing part of the Comprehensive Plan now will go to Tallahassee for review. City Manager Randy Knight thinks that will take about a month. The measure then will return to the City Commission for a final vote.

While Thursday’s crowd was sizeable and most seats were filled, no one had to stand and none were turned away – probably owing to the fact there was only one issue on the agenda this time.

Forty-three amendments were proposed – most (but not all) having to do with the large properties at Subarea D (the Demetree properties) and J (the Holler property). Unofficially, 25 proposed amendments passed, 18 failed and one was withdrawn. Check the City website for official numbers.

Important Among the Amendments that Passed Were the Following

Orchard Supply and parcels on the east side of 17-92 were removed from the district. Commissioners agreed that those parcels are more appropriately included in a 17-92 overlay district, if one is created at some future date.

Progress Point Remains for Public Use

The OAO Steering Committee originally recommended that the City-owned Progress Point property, known as Subarea C, would be reserved as open space for public use. While agreeing to public use, the Commission revised Subarea C standards to include: 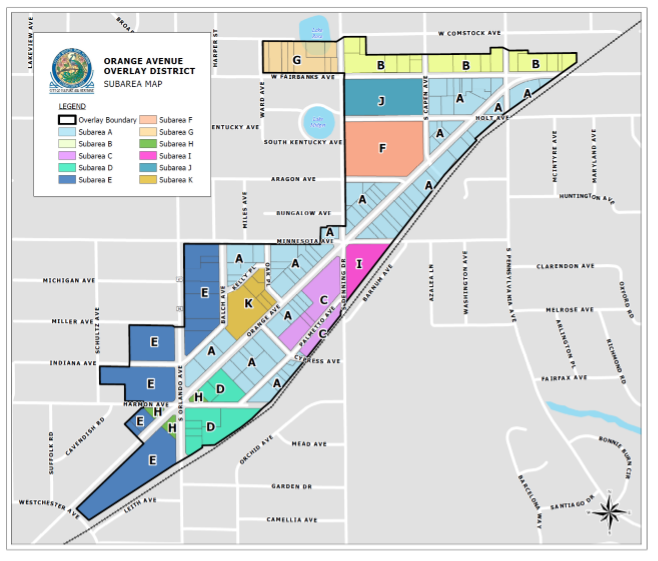 In addition to meeting the architectural standards of the OAO, “. . . for developments requiring a conditional use approval having a land area of more than 80,000 square feet, having more than 25 residential units, or having structures exceeding 35,000 gross square feet above grade, professionally prepared fully rendered 3-D digital architectural perspective images and elevations . . . shall be submitted to and reviewed by . . . a City-retained professional architect or by a City-established architectural review committee . . . .”

Large development projects within the OAO will pay “a proportionate fair share” of the costs of funding transportation improvements in order for the developers to use additional entitlements provided under the OAO. The City will develop a traffic model to identify needed transportation improvements and to establish a formula for calculating a proportionate fair share system.

The Commission has done most of the hard work on this project, but they can still make changes when the ordinance comes back from Tallahassee for the second reading.

But, For Now, All Eyes Turn Back to the Canopy