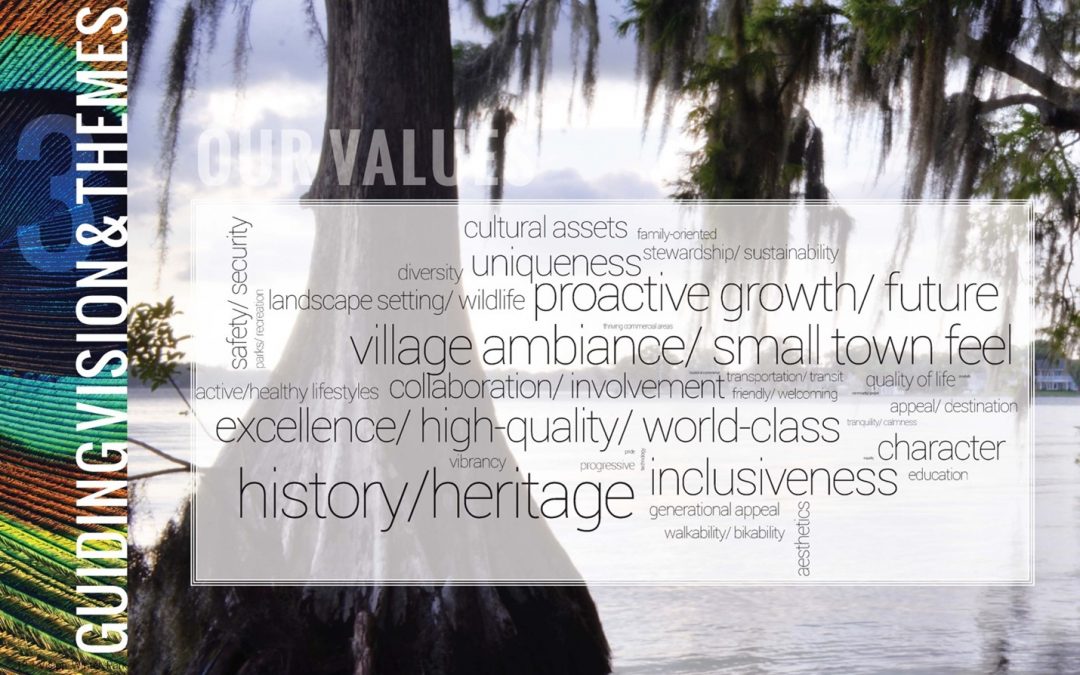 I invite this commission to put on their long-range visioning glasses and gaze five to ten years into the future — though many would say that falls short of “long-range.”

In 2030 I envision Orange Ave. as a walking mall, with no cars but plenty of cafes and other dining options. In fact, the OAO could evolve into a second downtown. If large property holders move forward we could have a hotel with outdoor seating, food and music.

Should the Jewett holding be sold to a retail development arm, we could have an entertainment zone as an anchor. Time will tell. Significant property ownership transfers are already underway.

These pressures bring into sharp focus the need for passive, quiet green space, not just for existing neighborhoods in the immediate vicinity, but also for the tenants of new condo and rental properties still in the planning phases.

Link in the Emerald Necklace

Let’s zero in on the 4.5 acres at Progress Point — a logical keystone in the evolving ‘green necklace’ of the pedestrian-bike trail that will connect Mead Garden with Denning with MLK, Jr. Park and beyond.  Progress Point is the poster child for how that plan can emerge and blossom. It’s a brand identifier for our community.

What do citizens want on Progress Point?

The question now is on asset development of the Progress Point real estate. What do citizens want? We’ve heard references to retail space ranging from 7,000 to 13,000 square feet to upwards of 40,000 square feet—the size of a Publix. But none of these recommendations came from residents.

We run the risk of setting up an East End Market scenario, which often turns into a drive-by because there is overtaxed parking capacity and a plethora of ‘attitude’ signs from the neighbors warning against illegal parking.

Original purpose of Overlay was to benefit existing business

How do you control noise and congestion with a micro-brewery and rooftop live music after the sun goes down? Not to mention overflow parking and traffic pressures for the immediate nearby neighborhoods and parking displacement for the existing businesses on the avenue. Wasn’t that the original objective to begin with – to protect and benefit the existing businesses? Why the mission drift?

Are you putting residents first?

What’s now being proposed can totally change that neighborhood character. Is this what this Commission wants to be saddled with—when many of your campaigns promised to put residents first?

A 14,000-square-foot venue drives the need for more parking. Why do that? We have already identified parking as a priority service for existing businesses. Let’s address the needs of existing Orange Avenue businesses first, before taking any action on new development.

Test your assumptions with the voters

To date, the Commission has spent months putting crayon marks on a Progress Point master plan, but not once have they invited citizen input.

There is no other existing Winter Park park with a retail component within its boundaries.

How about a Pilot Program

One possible compromise would be to pilot the micro-retail experiment first with Cady Way Trail and Showalter Field to give cyclists, joggers and sports enthusiasts options for food and drink. There is a much larger park footprint to work with there.

How has this commission changed from the last one?

Many of us watched as two structures ate up 26 percent of MLK, Jr. Park and occasioned the removal of over 50 mature trees that provided much-needed shade. One result of that long and torturous fight was the demonstration of the will of the citizens to change the direction of the Commission. At least now, there is not a four-story office building with associated parking structure of equal size slated for Progress Point.

But it’s time to swing the pendulum further. Keep what we have green and start looking for more future sources of open greenspace.