As Part of Planning Process for Orange Avenue Overlay 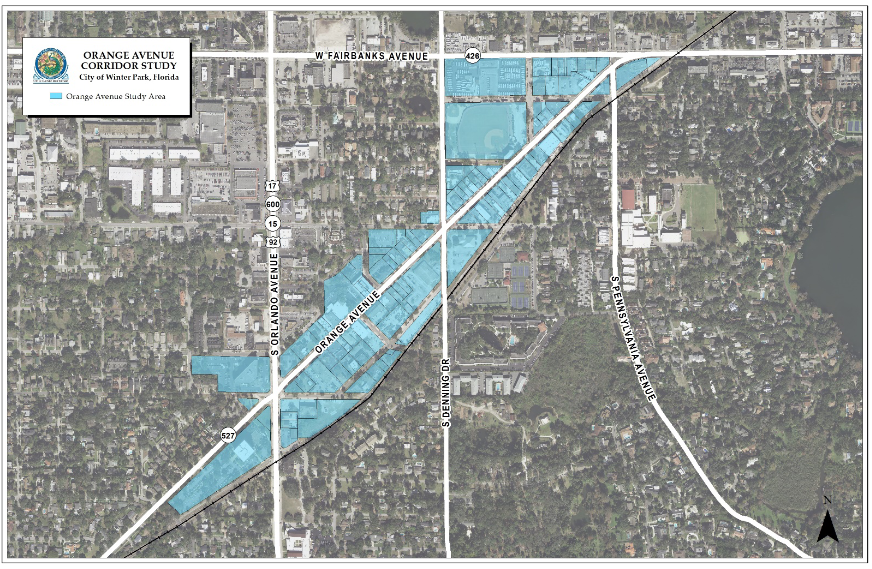 What do we do with 54 and one-half acres of valuable, under-developed business/commercial parcels — land along the segment of Orange Avenue that runs from 17-92 up to Fairbanks? The area contains 103 parcels, more than 90 percent of which are less than an acre. The largest is around 6 acres.

One thing we can do is a Zoning Overlay. An overlay is basically new zoning district that sits atop the existing zoning map, one that adds special restrictions and incentives to make a discrete, identifiable district, a district that can create cultural consistency and equilibrium and avoid piecemeal development.

According to the Center for Land Use Education (CLUE), “. . . regulations or incentives are attached to the overlay district to protect a specific resource or guide to development within a specific area. . . .Potential uses might include: Create a walkable community, connect pathways; Preserve and enhance a special district; Encourage economic development; Protect the quality of surface and groundwater and manage storm water. . . .” www.uwsp.edu/cnr/landcenter/

According to Planning and Community Development Director Bronce Stephenson, the Orange Avenue corridor has been economically stagnant for a number of years. Those of us who make the daily drive up and down Orange Avenue have become accustomed to the vitality of disconnected stretches of it, like Designers’ Row and the area around Foxtail’s and the Brewstillery. Interspersed among these hubs of activity, however, are parcels that have produced little more than weeds and first responder training facilities since the 2008 recession.

Most of that unlovely, under-used land belongs to three large landholders. The Big Three are Demetree Holdings, Holler enterprises and the City of Winter Park. Although most of us wouldn’t call Orange Avenue “blighted” – it’s ours, we’re used to it — Stephenson brings a fresh pair of Okie Eyes (Bronce hails from Tulsa) that see an exciting opportunity for redevelopment that will integrate redevelopment with the culture, spirit and ambiance of Winter Park.

Creation of a Third Place

Toward that end, Stephenson has formed a steering committee where citizens from across the political spectrum will come together, find common ground, and proffer recommendations for a reactivated community that will form a new “Third Place” in Winter Park. For the sake of discussion, a First Place is your home; the Second Place is your work place; the Third Place is where you go for recreation and social interaction. It’s your Fun Place. Stephenson wants to put that place on Orange Avenue.

Give Some to Get Some

A recurrent theme at the first Orange Avenue Overlay Steering Committee meeting was the perceived necessity for the larger stakeholders’ redevelopment plans to include infrastructure assistance for the many existing smaller stakeholders. In return for some increased density, large stakeholders would be expected to provide enhanced storm water retention. Many of the smaller businesses along Orange Ave. experience damaging flooding when there is a significant rain storm. This is caused by inadequate storm water management which, because of the size of their holdings, the Big Three have the opportunity to mitigate for the entire area. Another contribution the major landowners could make would be shared parking and what Stephenson calls “meaningful greenspace” – space everyone can use.

Stephenson sees the Steering Committee as a useful tool to create a community-driven project instead of a developer-driven plan. “This will not be a project where everyone gets every single thing they want,” said Stephenson, “but the hope is that we will have enough people involved who feel like they have a voice and that everybody gets some special part of this . . . . To have an opportunity like this in a built-out city like Winter Park . . . is a unique opportunity and if we don’t get serious and do this now, we may miss the opportunity.”

Unique to this project is a robust page on the City website devoted entirely to the Orange Avenue Overlay. There you will find a 16-question citizen survey where you can share your thoughts. In addition, the Steering Committee meetings are posted on the City website under ‘Boards and Public Meetings.’ June meetings will be held in Commission Chambers at 5:30 pm June 12 and 26. Public participation is encouraged. https://cityofwinterpark.org/search/?q=Orange%20Avenue%20Overlay

To assist the Planning staff with this project, Stephenson requested the formation of the Orange Avenue Overlay Steering Committee. The mayor and each commissioner appointed one member. In addition, a representative from each of 5 Advisory Boards and the original Winter Park Visioning Committee were asked to participate.

Stephenson has set an ambitious timeline for the Planning staff and the Steering Committee, though he cautions the schedule is fluid. March and April were devoted to the initial public input meetings. Based on the input received, the team will use the summer months to draft plan documents, perform mobility studies and create renderings.

In late Fall 2019, the team hopes to bring the final draft of the Orange Avenue Overlay to the City Commission for a vote.