Pick for Top Cop Pulls Out

Pick for Top Cop Pulls Out

While Police Cars Get a New Look

Winter Park’s pick for Top Cop, Dallas Police Department Narcotics Division Deputy Chief Vernon Hale, announced over the weekend that he has withdrawn his name from consideration. This leaves the post open as Brett Railey begins his final week as Chief of Police of the city he has served for nearly 35 years.

The news leaked out during the August 22 Commission meeting. No reason was given for Hale’s change of heart – simply that he “had changed his mind.” In a subsequent interview, Chief Railey told the Voice that the City has a sizeable pool of well-qualified applicants from which to draw, and that he expected a new Chief will be announced soon.

Whoever Railey’s successor turns out to be, he’ll have a big pair of shoes to fill – and some decorating to do. 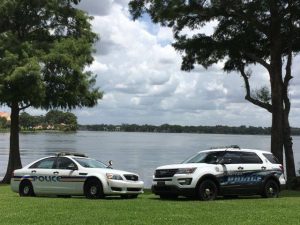 Are These the Cars of Arts & Culture?

Previously, during Commissioner reports at the end of the August 8 Commission meeting, Commissioner Sarah Sprinkel reported that she had seen a strange looking police car in a Publix parking lot. While the paint job identified the vehicle, a small SUV, as a Winter Park police car, Sprinkel was taken aback by the new paint job.

It turned out that some of the younger officers had approached Railey with the notion that the old paint job on the police sedans looked a little, well, stodgy. “Too Nineties.” Here is Chief Railey describing what happened when he challenged the officers to come up with a new look.

Once the design was approved by City Manager Randy Knight and senior staff at the police department, all new vehicles were slated to have the new look. Winter Park now boasts eight small SUVs with the new design.

“Not My Favorite,” says Leary

“The police cars are some of our most visible branding devices,” said Mayor Steve Leary. “And I don’t think that paint scheme, that detail, matches anything else we’re doing in the city of Winter Park.” Leary went on to explain that there should be a “more consolidated view” of branding, and directed the City Communications Department to become more involved in the design of the new cars.

Railey responded, “That’s an understandable concern that you may have,” and suggested the Commission direct the City Manager to direct the new Police Chief to change the paint job moving forward.