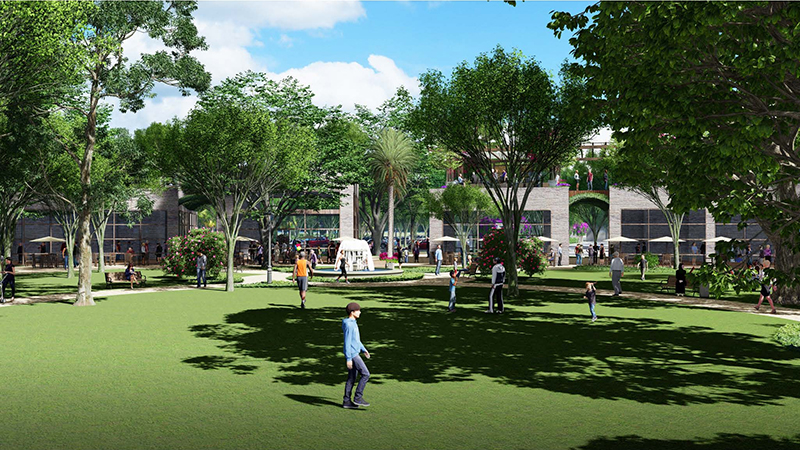 Amidst the confusion and frustration surrounding the Orange Avenue Overlay (OAO), a Commission work session on Thursday, July 23, offered a glimmer of hope there might soon be progress at Progress Point. The work session centered around ideas of what could happen at the City-owned property located at the center of the proposed overlay district, roughly half-way between the two large properties at either end, one owned by the Holler family interests, the other by Demetree Global.

Commissioners met Thursday to explore the possible fate of Progress Point – an empty, blighted parcel of land snugged up against the railroad tracks that the City acquired in the infamous land swap of 2011, when the City traded the old State Office Building parcel at the corner of Morse Blvd. and Denning Dr. for the Progress Point property on Orange Ave. 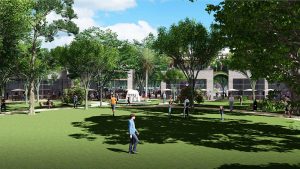 Since the meeting was a work session, the Commissioners could take no action. They did, however, agree upon what action they plan to take when the opportunity presents itself at the next commission meeting. Four Commissioners were present – Sheila DeCiccio, Marty Sullivan, Todd Weaver and Vice Mayor Carolyn Cooper. Mayor Steve Leary was absent.

After a joint presentation by a consortium that included ACi architects, LandDesign, HR Miller Landscape Architect and Steve Goldman about what Progress Point could look like, were the City to go that direction, the Commissioners agreed upon six basic principles that would guide their decisions regarding Progress Point.

The City will maintain control and ownership of the property, though the Commissioners said they would consider the possibility of a land lease to a private developer or to a non-profit concern created specifically for the purpose. No residential property will be built on Progress Point. The parcel will contain approximately 1.5 contiguous acres of green park space and a 12-foot-wide bike path along a relocated Palmetto Avenue. Businesses in any structures built on the parcel must enhance the park experience for residents and visitors. The City will realign Palmetto Avenue, moving it south, closer to the railroad tracks, to provide more contiguous land for parking and the 1.5-acre park.

The Commissioners allocated $150,000 for the engineering and design necessary to relocate Palmetto Avenue, build surface parking and the pedestrian/bicycle path. This will enable planners to determine what infrastructure improvements will be needed to support the types of businesses that would be appropriate for that site. An additional $10,000 will go for a plan to connect the urban park spaces throughout the City of Winter Park.

This chapter of OAO history begins with OAO Steering Committee. (This is not Chapter One.)

In late 2019, after a lengthy series of meetings and public input, a 10-member OAO steering committee submitted their recommendations to the City for the adoption of an ordinance to create the OAO. The steering committee voted 8-2 in favor, with Michael Dick and [future] Commissioner Sheila DeCiccio dissenting. Michael Dick felt development entitlements for the two large property owners were overly generous. Ms. DeCiccio objected to the city planners’ idea of selling the Progress Point property to a developer for office space and a parking garage that would contain extra parking to be shared with surrounding small businesses. Instead, DeCiccio wanted the City to retain ownership.

The ordinance to create the OAO went to the Commission on January 13 for its first reading. That Commission meeting, which began January 13 at 3:30 pm, lasted until approximately 2:30 am January 14, and was continued January 16 for another five to six hours. The ordinance, which included provisions for the 1.5-acre park, passed on a 3-2 vote, with Mayor Leary and Commissioners Sarah Sprinkel and Greg Seidel supporting, and Commissioners Carolyn Cooper and Todd Weaver dissenting.

The OAO ordinance was sent to Tallahassee for approval and came back to Winter Park for its second reading March 9. At the March 9 Commission meeting, the ordinance was approved as amended – there were more than 50 amendments.

On March 30, the newly-seated Commissioners rescinded the OAO ordinance. Their stated intent was not to kill the OAO, but to revisit some of the rules and regulations regarding the density, size and height of new development, particularly on the larger properties. Commissioner DeCiccio also wanted to make sure Progress Point remains under City ownership.

On April 24, Demetree Global filed suit against the City as WP Station Tower, LLC, Winterpark Station, LLC, Wintergate, LLC, and Palmetto Building 2019, LLC. The Holler properties, as DI Partners, LLLP, and CVJCR Properties, Ltd., LLLP filed suit shortly after, on May 12. The complaints request the courts to declare the ordinance rescinding the OAO null and void.

While there is no restriction on development within the OAO under the City’s current zoning rules, the temporary moratorium prevents new OAO development based on the regulations in the rescinded OAO zoning plan. The moratorium is expected to last until the current Commission comes up with a revised version of the overlay plan.

Commissioners have scheduled a series of work sessions throughout the remainder of the summer to come up with a plan to move forward on development rules for the OAO district.

The process of creating the Orange Avenue Overlay is far from over. What happens at Progress Point may well be the first step.