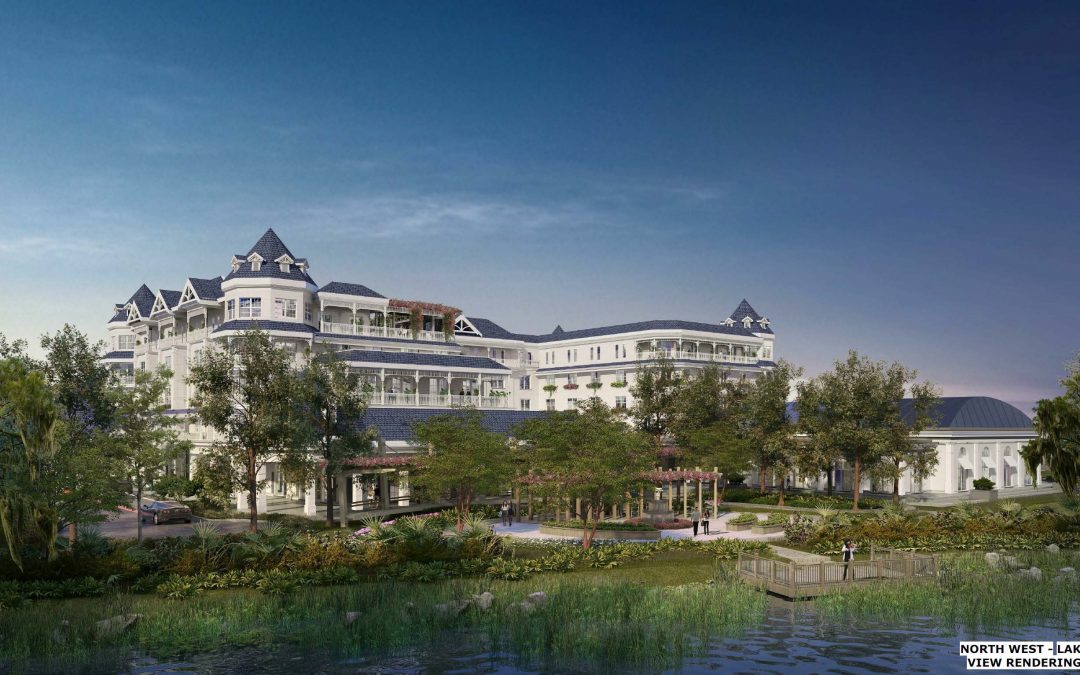 A redesigned 132-room Henderson Hotel received approval on a 4-3 vote from Planning & Zoning Jan. 5 – 6. The luxury hotel on the eastern shore of Lake Killarney will feature a 7,500 square foot ballroom and a 220-seat restaurant. The $50 million Henderson project was the final agenda item, closing a marathon 7-hour meeting that went well past midnight into Jan. 6.

After the project was tabled last year, developer Adam Wonus and architects Baker Barrios sent the Henderson Hotel back to the drawing board. Despite the addition of 20 rooms, the size of the building was reduced from 210,522 square feet to 129,100 square feet by placing one level of garage parking underground. The footprint of the building will now allow approximately 44 percent of the total land area to be open green space.

The application includes a request for Conditional Use and multiple requests for amendments to the Comprehensive Plan and the Zoning Code. The proposed 2.97-acre site is an aggregate of several parcels, seven of which are currently zoned residential R1A. Four of the residential parcels have lakefront access. Two other parcels are zoned office. The application seeks to change all these zoning designations to commercial C3 and Open Space Recreational.

The Henderson application also seeks approval to vacate portions of Killarney Drive and Fairview Avenue in order to provide access to the lakefront. The hotel will be set back from the lake 84 feet at the closest point, and the developer proposes to create more than an acre and a half of open space and parkland and to provide public access to a pedestrian viewing dock they plan to build.

There were in excess of 50 public comments, lasting four-plus hours, and they were more or less evenly divided between those who were enthusiastically in favor of the project and those who were vehemently opposed to it. If there was anyone in the middle ground, they remained silent.

The two opinion pieces that accompany this article are representative of the differing views of this project.

Those in favor see the proposed hotel as an amenity for the city, and point out that the Henderson would be the only lakefront hotel in Winter Park. They appreciate the Victorian-style architecture that is reminiscent of the old hotels that were here at the beginning. They look forward to having a place to celebrate special occasions or just have a nice dinner out. The Henderson would provide residents an alternative to the Alfond Inn for visiting friends and relatives. Most seemed to regard the hotel more as a part of the commercial area along 17-92, which needs revitalization, and less a part of the interior neighborhood adjacent the lake. Commenters in favor included a number of residents from the Killarney neighborhood.

And those who don’t

Those who spoke in opposition were concerned about the size of the project and the violation of the Comprehensive Plan provision to, “Protect Single-Family Residential Use in the Killarney Neighborhood from Non-Residential Land Use Encroachment.” Concerns were raised about the subterranean parking garage, which is in close proximity both to the lakefront and to Hillstone Restaurant, and commenters worried about adverse effects to the lake and surrounding properties from the traffic, light and noise a hotel/restaurant/ballroom facility would produce.

Having received the nod from P&Z, the Henderson Hotel application will proceed for a first reading to the City Commission on January 27, 2021.

Open Letter to Candidates for Mayor

Where Do You Stand on the Henderson Hotel?

Editor’s Note: Articles written by citizens reflect their own opinions and not the views of the Winter Park Voice.

Qualifying for the Winter Park mayor’s race has begun. Two candidates, Phil Anderson and Sarah Sprinkel, have long been declared candidates for the gavel. Not even a pandemic can stop a city election, so zoom rooms, patios and even living rooms are filling with the pitches of the candidates in their attempts to win your vote.  The air, followed by city mailboxes, will begin to fill with candidates’ promises to “protect the traditional charm and character of Winter Park,” as they do every time there is a race for a commission seat.

Usually, we voters simply must take them at their word. But this year, a litmus test is available to us on this promise right now. That test is the application of Winter Park Historic Hotels Group to build the Henderson Hotel – and where the candidates stand on the issue.

On Tuesday night and into Wednesday morning, the Winter Park Planning and Zoning Board heard the request of Adam Wonus and the Winter Park Historic Hotels Group to build a 132-room, five-story, 129,100 square foot hotel and event center with a 205-space subterranean garage on the shores of Lake Killarney. Seven of the lots which comprise the hotel site are currently zoned single family R1A, and four of these have direct lake frontage. The hotel site is next to Hillstone Restaurant but unlike Hillstone, the hotel would have no frontage on 17-92.

P & Z voted 4-3 to recommend construction of the behemoth in the middle of a quiet, lakefront residential neighborhood, essentially taking a blow torch to the city’s Comprehensive Plan. The number of provisions in the Comp Plan which prohibit this type of development is this place are too numerous to count. But the one that objecting neighbors relied upon most heavily to guard their rights to the peaceful enjoyment of their homes was Policy 1-J-9.

Protect Single-Family Residential Use in the Killarney Neighborhood from Non-Residential Land Use Encroachment. The City shall preserve and protect the single-family residential land use within the Killarney neighborhood from commercial and office encroachment, excluding parcels that have or obtain Parking Lot (PL) zoning designation along the edges where commercial, office and residential meet. All development should include appropriate landscape buffers, including walls if necessary, so as not to have a negative impact on the residential neighborhood.

Will the Killarney neighborhood lose its residential flavor?

In my opinion the hotel will change the residential flavor of this neighborhood forever, as it would allow the penetration of light, sound, traffic, and more into this neighborhood.   The building would dwarf its surroundings at heights of up to 73 feet. Meetings, parties, weddings and other celebrations will be allowed at the hotel, which is a 24/7 operation by definition. And all on a site that includes six residential homes, one of which is currently occupied. The nearest neighbors live directly across the street.

Where do Anderson & Sprinkel stand?

What do the current candidates for mayor think about this project? They cannot vote on it, but they can tell voters where they stand. Neither spoke at Tuesday’s P & Z meeting. Without question, the most important role of the commission is to make land use decisions in our city. Where do they stand? I don’t know, but I sure would like to know before I cast my vote. Whether you are for approval of the project or against it, wouldn’t you like to know too? I ask them to inform voters of their position on this project. Now.

Support for the Henderson Hotel

Editor’s Note: Articles written by citizens reflect their own opinions and not the views of the Winter Park Voice.

My wife Sarah and I are both long time Winter Park Residents. We moved into our current home on Lake Killarney almost 20 years ago. While that time has gone by a little too fast for my taste, we have both loved seeing how our community has evolved over the years. With time comes change, but that positive change seems to have missed the area where the proposed Henderson Hotel is planned.

This area, between Hillstone restaurant and the Palm Hills (former Ranch Mall) development, has remained run down and is in need of upgraded redevelopment to come up to Winter Park standards. In fact, at this week’s Planning and Zoning meeting, a fellow Lake Killarney resident mentioned having to take drug paraphernalia out of his young daughter’s hands during their walk in the area. I can only say, I am not surprised.

I am writing to express not only my enthusiastic support, but also my excitement for The Henderson Hotel at Lake Killarney. This project will completely revitalize a forgotten area of Winter Park by removing dilapidated buildings and adding a park space to an area that is hardly walkable at this time.

As I sat listening to the presentation of the proposed Henderson Hotel at the Planning and Zoning meeting January 5, 2021, I was struck by what Ross Johnston and some other board members noted about this project. This project is a 17-92 project.  It is not a project that is in the Killarney Neighborhood.  This project is a Winter Park community project.

The Henderson Hotel has been painstakingly planned and is a result of an unprecedented outreach by the developers to the neighborhood and to the entire community.  My wife and I first learned about the project some three or four years ago and over that time we have been asked to share our views on how to make the project better, more environmentally sustainable and more sensitive to the surroundings.

The end result is that the proposed Henderson Hotel project takes into account the wants, concerns and views of the overall community and the neighborhood regarding cut-through traffic, creating a safer environment for the families that live in the neighborhood, creating a neighborhood park, reducing lake traffic by eliminating the deteriorating docks, cleaning up the lakeshore and reducing debris coming into the lake to improve the overall health of the lake. It is incredible that one project can do all of this and also be a beautiful addition to Winter Park. If you have not had a chance to take a closer look at this project, I urge you to do so as we have a great opportunity to add a timeless asset to our community!