The Rollins campus is about to get some major upgrades. The college unveiled plans to double student dormitory space and provide around 600 additional parking spaces in a new garage at the site of the current surface lot on Fairbanks and Ollie Avenue. 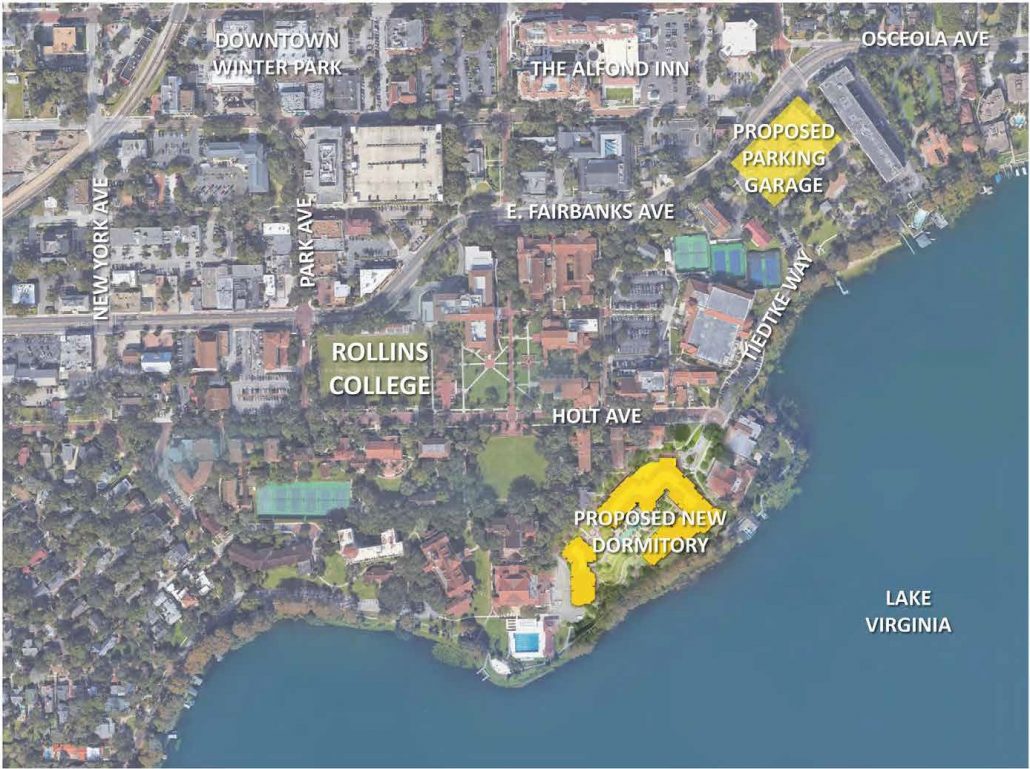 “We Are Not Growing the College”

In a presentation to the Planning & Zoning (P&Z) Board, Rollins President Grant Cornwell stated that Rollins has no intention of becoming any larger than it is now. “We are not growing the college,” said Cornwell, “we are simply adding residential capacity.” Cornwell added that, in his view, Rollins is ‘where it should be’ and there is no intention to increase its size.

40 Percent of Students Live Off Campus

Cornwell explained that, at present, 40 percent of the student body must reside off campus because of the shortage of student housing. McKean Hall, the current 60-year-old dormitory, has 250 to 275 beds, providing space for only the freshman and sophomore classes.

Rollins plans to build 250,000 square feet of new dormitories with approximately 500 beds and rooms for three Resident Advisors in the area immediately surrounding McKean Hall. Students will continue to inhabit McKean Hall until the new dorms are completed. When the new dorms are finished, McKean Hall will be demolished and a large swimming pool and patio will be built in the center courtyard, surrounded by the new dorms. This will enable the college to bring the entire junior class back onto campus.

Goal is to Increase Quality of Student Learning Experience

“Our primary goal is to increase the quality of the student learning experience by bringing them back into campus life,” said Cornwell. “What students learn outside the classroom, living with their peers, going to lectures, athletic events, musical events – and just the very dynamic of campus life – is part of the value that we bring.”

Current Student Housing Out of Date

Secondly, while Rollins is well ranked among liberal arts colleges, it is in what Cornwell described as a fierce competitive market. The current residential housing stock is old and out of date and does not live up to the expectations of students and their parents. “So,” said Cornwell, “we are both serving our mission and competing in a market.”

‘This is One Way for Rollins to be a Better Neighbor’

“The third reason,” said Cornwell, “is also important to us. We think this is a way for Rollins to be better neighbors.” Drawing a chuckle from the audience, Cornwell acknowledged that while Rollins’ 18- to 23-year-old students are all wonderful, they are not always wonderful neighbors. We think we will be a better neighbor to Winter Park if more of our students are brought back into the flow of campus life, Cornwell said.

On Campus Parking Will Be Safer

Cornwell pointed out that the new parking garage will free up spaces in the Sun Trust garage and will reduce the need for students and faculty to cross Fairbanks Avenue on foot. On campus parking should also take a good many student vehicles off the streets of Winter Park.

Construction Project on a Fast Track

Rollins hopes to complete construction and have the new dorms ready for occupancy by the beginning of the 2020 Fall term.

P&Z approved the application unanimously. The project will move forward to the Commission at the second January meeting.