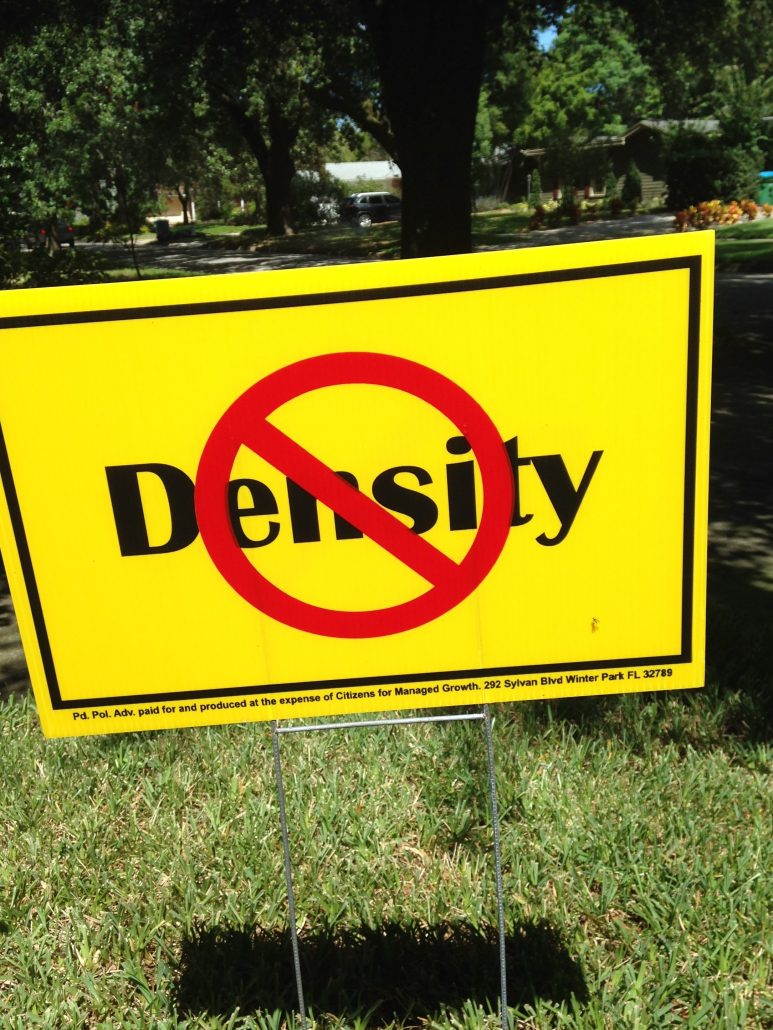 The city Commission is now all that stands between a group of Osceola/Lakeview Planning District residents and a development proposal which threatens to destroy the single family character of their neighborhood, as well as that of a block on the north side of Aloma between Phelps and Lakemont Avenues.

No Density Signs are Back

City Planning staff and the Planning and Zoning Board have given the high-density, 18 town home project a big thumbs up, despite the fact that it will strip four of the five lots of their single family R-1A status. Residents adjacent to and directly behind the project are up in arms.

City Planning staff has worked with the applicant, Ansaka LLC, on the project for close to 18 months and are now recommending approval. The project takes the maximum conceivable density under the Planned Unit Residential Development (PURD) and R-3 zoning classifications, then adds four additional housing units.

The Comprehensive Plan provides that single family homes in this district are to be “preserved.”  City planning staff maintains that this is true of 98 percent of the planning district, but not on this part of Aloma. The growing number of yellow “No Density” signs sprouting along Aloma suggests that prospective neighbors beg to differ.

Ironically, during the same 18-month period the Planning Staff was working with the applicant, the City’s Comprehensive Plan was undergoing its periodic revision process. Despite countless staff hours and numerous community meetings, including Commission meetings, the Comp Plan still calls for the single-family R-1A designation of these parcels west of the corner of Lakemont and Aloma to remain undisturbed.

Planning and Zoning took up Ansaka’s application on December 5, 2017. They approved it over the objections of the residents who appeared and spoke in opposition.

P&Z recommended the applicant hold a community meeting to discuss an appropriate “buffer” between the project and the adjacent single family homes to the north and west of the micro-community before the project went to public hearing at the January 6, 2018, Commission meeting.

Ansaka skipped the January 6 Commission meeting, and finally held a community meeting on March 1, 2018. It is unclear how attendees were notified of the meeting. The applicant chose to postpone the public hearing until March 26, 2018.

Then, a glitch in the City’s public notification process necessitated a delay for two more weeks, until Monday, April 9, because of the City’s inability to verify that it had provided adequate public notice in all its required forms, including publication.

The Applicant made clear his intention to proceed on March 26, but was unsuccessful. The project was pulled from the March 26 agenda and rescheduled to April 9. The intervening two weeks have seen a surge in awareness of the project throughout the neighborhood and throughout the City.

Neighbors Ask Commission to Step into the Breach

At this moment, residents of the neighborhood near the project are holding out hope that the city Commission will give their already established property rights priority over those of a developer who bought land speculating that he could rezone it, change the future land use map, and amend our Comprehensive Plan.