Between a Lake and a Sink Hole 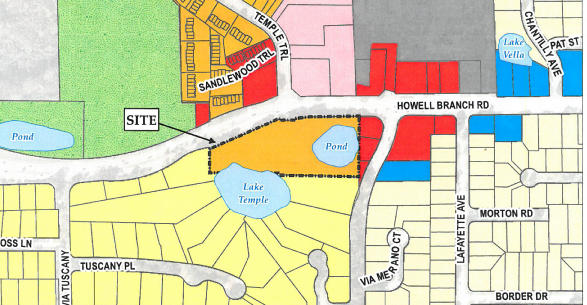 Winter Park Elderly Services LLC will go before the Planning & Zoning Board on Tuesday, October 4, to ask for variances that would enable them to build a 50-bed memory care and assisted living facility at 1298 Howell Branch Road. The location is at the intersection of Howell Branch and Temple Trail. The facility will be called Villa Tuscany.

City Planning staff has recommended against approval. They acknowledge the need for a memory care facility in Winter Park. The staff report states their belief that the location is appropriate, but they object to the height of the building and its proximity to Lake Temple. If the developer were willing to alter the design of the building and shift its placement on the site, the Planning Department could reconsider its position and support the project.

Between a Sink Hole and a Lake

The building site is a difficult one, with wetlands and a sink hole limiting development space. It may ultimately prove too small to accommodate the nearly 40,000-square-foot facility the applicant wants to build there. According to the applicant’s survey, the entire site is 3.777 acres, but only 2.18 acres are above the Ordinary High Water elevation. The building would be located between a sink hole and Lake Temple, as shown in the site map.

The long-vacant lot is densely forested. According to the City, there are 64 protected shade trees on the lot, 29 of which the developer proposes to remove. These include several historic live oaks measuring five feet or more in diameter. According to comments from Urban Forestry, the tree diameters indicated on the Tree Preservation plan submitted by the developer are inaccurate. “Footprint corners, drive lane, and parking corners need to be staked and determined in the field,” reads the report, “prior to actual determination of the exact trees that could possibly be preserved or those that must be removed.”

This project has the attention of the neighborhood. More than 40 emails and letters have been submitted to P&Z and to the Mayor and Commissioners as of this writing. The greater number of citizens has written in opposition to the project, but a substantial minority supports it.

There Is a Need for This Service

Those in favor cite the need for this type of facility in Winter Park. They point to the fact that the applicant is a locally owned company, which also owns and operates the Alabama Oaks assisted living facility at 1759 Alabama Dr. “Alabama Oaks is most always full with a waiting list,” wrote Nurse Practitioner Kelly Higgins, “and the community should welcome the opportunity to offer this type of care to elder residents in Winter Park.”

“Winter Park’s seniors should receive care in the same community they have called home for decades,” wrote Alison Polejes. “Yet, we currently have no dedicated memory care facility.”

Residents opposed to the project are concerned about the suitability of the site and the size of the building. Limited parking and the impact on traffic are also mentioned.

“This facility is totally incompatible with the overall residential nature of the surrounding neighborhoods,” wrote Karen Kaczmarek. “This project, at nearly 40,000 square feet and three stories with heights reaching over 42 feet, is just too big for the area.”

“There is a sink hole on the property and a small lake backing up to residential houses,” wrote Charlotte Schmitt. “The building is too tall, too many square feet, has too small of a parking lot and is too close to the sink hole and lake.”

Donna Render wrote, “St. Johns [River Water Management District] told us years ago they could never approve a building here. How is this being ignored?” Ms. Render went on to point out, “You can’t fool Mother Nature!”