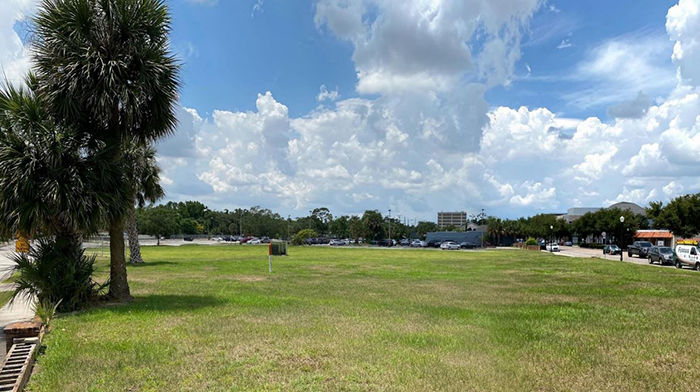 Progress Point Park Gets Thumbs Up – No RFP

Kicking off yet another discussion at the August 11 Commission meeting of what to do with Progress Point, Mayor Phil Anderson posed the question, “What if there were no buildings?”

Will there be an RFP?

While the agenda item for last Wednesday’s meeting referred to a “Continuation of Progress Point & Potential RFP,” this Commission finally heard the question: What IF there were no buildings? As Commissioners discussed the possibilities at Progress Point, the question of the Request for Proposal (RFP) and built structures took a back seat to the desire for open green space and the need for parking for existing businesses in the area.

Commissioner Todd Weaver explained that the Commission agreed to limit future buildings on Progress Point to 9 percent Floor Area Ratio (FAR) – which translates to about 14,000 square feet on two floors. “We didn’t go out with an RFP,” said Weaver, “because if the current parking needs for existing businesses are met, there is no space for parking an additional 14,000 square feet of commercial space without building a parking garage.”

There will be no RFP and no buildings on Progress Point Park – at least, not for now.

Progress Point has a bit of history

For years, discussions leading up to Wednesday night’s meeting had to do with what could or should be built on Progress Point, an oddly shaped piece of property the City acquired in a controversial 2011 land swap in which the City traded to CNL Bank the large rectangular parcel across from the new Library-Events Center at the northwest corner of Denning Dr. and Morse Blvd. for the scruffy plot down by the railroad tracks on South Denning. The parcel on Denning and Morse, once home to the old State Office Building, now boasts a shiny new building full of Class A office space. Progress Point is looking better, too, since uninhabitable buildings were cleared and the grass is cut regularly.

Plans for Progress Point, which until now were all about the so-called ‘built environment,’ stalled when the Orange Avenue Overlay (OAO) ordinance was rescinded. A recent citizen petition with more than 500 signatures called for the City to ‘Keep It [Progress Point] Green.’ Petition organizers pointed out that of the four options for Progress Point previously presented by City planners, not one was a park – a natural environment as opposed to a built environment. The possibility of putting just a park there, with no buildings in it, had not been considered.

On August 11, the Commissioners gave Progress Point that consideration. Commissioner Carolyn Cooper urged her fellow Commissioners to adopt what she called a phased, organic approach. “We should slow this process down,” said Cooper. “Let’s take care of the park, the storm water treatment, realign Palmetto Avenue, build the bike and pedestrian path and make sure there is adequate parking for the existing businesses.”

Once the park is in place, said Cooper, the Commission should support the Orange Avenue merchants in their efforts to activate the park. “Give them a chance to take ownership,” she said, “and see what they want the park to be.”

For the time being, Commissioners agreed to build a park with paths and large mature shade trees. Park amenities will include the realignment of Palmetto Avenue closer to the railroad tracks, which will increase space for parking, green space and a bike and pedestrian path. Decorative lighting will be installed for safety and aesthetics along paths and in parking lots. Approximately 120 parking spaces will be provided for park users and existing businesses, and parking will be free of charge. No decision has been reached about City funding for a park maintenance building or restrooms for park users, but discussion of these amenities is ongoing.

The Orange Avenue Overlay ordinance is tentatively scheduled for a second and final reading in late fall of this year. There is cautious optimism that ongoing litigation between the City and major landowners Demetree and Holler will wind up, and the OAO will finally become a reality.

City Planning and Transportation Director Bronce Stephenson estimates that tree planting in the park could begin as soon as December 2021, and that park plans would be completed for Commission approval by first quarter 2022.

Green space with paths and shade trees located midway between two potentially high-density developments will give residents respite. As one citizen commenter observed, “We don’t need to activate the park; we need the park to activate the corridor. Imagine what Park Avenue would be without Central Park.”