What is an Overlay District?

What is an Overlay District?

What Does It Mean for the Orange Avenue Corridor? 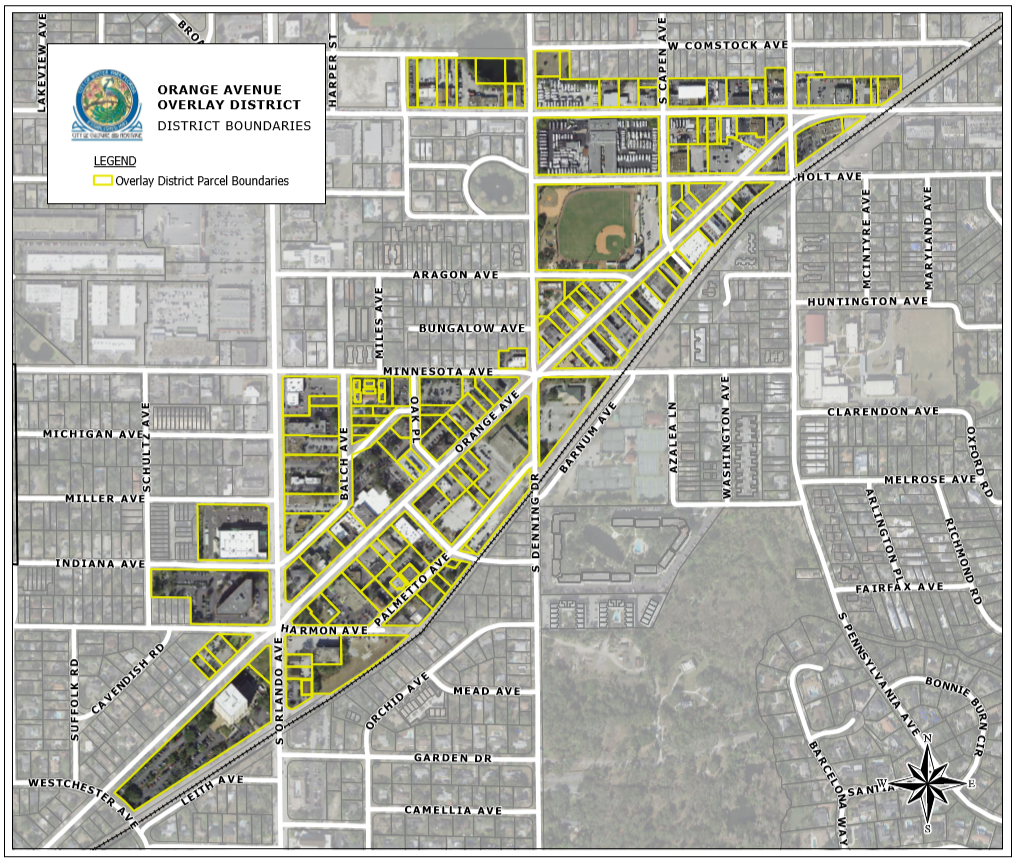 Back in 2016, the Commission added a provision to the City’s Comprehensive Plan promising the creation of a “Mixed Use Overlay” category ‘within one year.’

Now that we are finally getting around to it, what is it anyway?

‘Mixed Use’ is a development term – a type of development Winter Park has done before on Park Avenue and in Hannibal Square that includes commercial, retail and residential development. Some would include Winter Park Village in that category, though the residential component is less apparent. The rules for these specific areas have worked well for us. That’s why Park Avenue and Hannibal Square look the way they do and why they have stood the test of time.

What is happening on Orange Avenue is a mixed use zoning overlay, but you can call it ‘mixed use,’ an ‘overlay district’ – or baked potatoes. Simply put, a zoning overlay regulates development within certain geographical boundaries in a manner that expresses the community’s vision of what they want the area to be. In this case, it also is way of granting entitlements to developers that seems fairer to the City.

Parenthetically, this brings us to a thought to keep in mind during this discussion: Who or what is The City? Is it you and me and everyone who lives here and pays taxes? Is it the elected officials who sit on the dais? Is it the staffers who toil behind the scenes to make the machinery work? Is it all of the above?

In the case of the Orange Avenue project, the answer is ‘all of the above.’ In April, the [then new] Director of Planning and Community Development, Bronce Stephenson, brought together a Steering Committee of 11 citizens from across the political spectrum to create a vision for what the Orange Avenue corridor should be. The Committee met 12 times over the summer. Public input was taken at each meeting.

The Steering Committee and staff identified a specific geographic area, divided it into sub-areas depending upon the type of development that was either existing or possible, and decided how they thought the area could develop in a way that would preserve the eclectic character and offer the greatest benefit to The City. The area they defined became the Orange Avenue Overlay (OAO) area.

Three large landowners – Demetree Holdings on the southern part of Orange Avenue, Holler Properties on Denning and Fairbanks, and City-owned Progress Point in the middle – all have holdings that are large enough to be able to provide resources to upgrade the entire corridor for The City.

To fix area-wide issues that affect existing businesses and discourage redevelopment within the OAO district, staff and the Steering Committee first had to identify the problems. What they found won’t surprise anyone.

The OAO seeks to grant entitlements to developers by ‘quid pro quo’ rather than by variance or rezoning. If a developer is granted entitlements by rezoning and/or variance, as is currently the norm, the developer gets some or all of what he or she wants . . . and the City gets little if anything in return.

According to the rules being put in place for the OAO, if the developer has an ‘ask,’ the developer must also bring a ‘give.’ City Planning Director Bronce Stephenson explained that a developer can offer two kinds of ‘gives’ – quantitative and qualitative.

Quantitative ‘gives’ could include:

Of course, there would be overlaps.

Doors and Keys – for which read: density — pay for storm water mitigation, parking & open space. If developers don’t make money on their projects, they don’t do them. Eliminating parking from Floor Area Ratio (FAR) calculation is one way to help them be profitable. Large owners – Demetree, Holler and the developer of Progress Point – will be able to ‘earn’ up to 200 percent FAR by providing fixes for one or more of the area-wide problems. The 200 percent FAR is what we have on Park Avenue and in Hannibal Square.

“We are desperate for space for storm water treatment, especially along Orange Avenue,” said Stephenson. “Progress Point is the lowest elevation within the OAO, and that provides an opportunity for the developer of that property to correct the flooding and storm water treatment problem for the entire area.”

“Today’s 485-space parking deficit translates into 3.9 acres of asphalt surface parking,” Stephenson explained. “We want developers to come in and build vertical parking with 10 percent additional shared spaces. There’s not enough room for it to be surface parking. That means, to make their developments work, the parking places should not be included in their FAR calculations.”

Developers with properties larger than 1.5 acres must provide 25 percent “meaningful open space.” For the Holler property, at the current asking price, that 25 percent translates to $6 Million worth of land, according to Stephenson – a sizeable ‘give’ in anyone’s estimation.

Described here are just some of the concessions from developers that will provide substantial value to The City as the OAO redevelops. The final draft report of the Steering Committee will provide detailed lists of ways developers can earn entitlements. Information regarding the Committee’s progress is updated regularly on the City website https://cityofwinterpark.org/government/boards/orange-avenue-overlay-steering-committee/.

What About Progress Point?

The Steering Committee, with 10 of its 11 members present, met the night of November 13 at the Mead Botanical Garden Clubhouse to vote on the final report. As the final report was presented, the one remaining bone of contention was the four-acre parcel at Progress Point.

The City owns the land, but will either lease or sell to a third party to develop the parcel. Over the 12 Steering Committee meetings, there had been considerable discussion of a four-story office building with associated parking structure, but a number of Steering Committee members were unhappy with that solution.

Stephenson pointed out that while The City has no pressing need to sell or lease this piece of land, it has not proven itself to be a good steward. The Committee members agreed that what we need at that location is parking, open space, drainage and connectivity with Mead Garden.

Devoting the entire 4+ acres to parkland would deprive the existing Orange Avenue businesses of the opportunity for treatment of storm water that currently floods many of their businesses, and it would deny them desperately needed parking.

No Consensus on Progress Point

At the end of the day, the Steering Committee stipulated in their report that there was no consensus on the use of Progress Point. The Committee voted 8 – 2 to approve the final report. Dissenting were Michael Dick and Sheila DeCiccio.

“We Can Do Better”

Asked why she voted against the report, DeCiccio stated, “I wanted my voice to be heard on Progress Point. I am 100 percent for everything else in the report. I am all for the Holler and Demetree entitlements. But a four-story office building with a garage bigger than the new one at Rollins? We can do so much better than that.”

“Most of what’s there now is already offices and daytime use,” DeCiccio went on. “There can’t be any shared parking in the daytime – they don’t have enough daytime parking as it is, and nothing much goes on there at night. An office building will not contribute anything there.

“There are so many wonderful things we could do there that would activate the area at night,” she said. “We could do a theatre district, food courts, things that people could go to and have fun. We can do more than just green park space, too, but we wouldn’t need so much parking if we put something besides an office building there. Where is our imagination? This is Winter Park – we need something really wonderful for everyone there.”

There is No Lack of Public Input

By the end of this process, the City will have held 19 opportunities for public input.

The Steering Committee Report will go to Planning & Zoning December 3 for a public hearing.

City Planning Director Bronce Stephenson will be at the Farmer’s Market December 21 from 7:00 am to 1:00 pm to answer questions.

You can watch three educational videos about this process at  cityofwinterpark.org/vimeo

And you can email your feedback to OrangeAve@cityofwinterpark.org