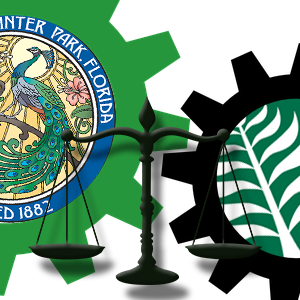 The Library/Event Center/Parking Structure issue is still making its way through the tangled maze of the Florida judicial system. On October 20, the hearing regarding validation of up to $30 million in general obligation bonds for the purpose of building the library-event center came before Judge Margaret Schreiber of the Ninth Judicial Circuit.

Despite the array of arguments and the number of lawyers present to make them, at the end of the day, it comes down to one question. What language will the Judge put in her final order?

Bonds Will Be Validated

Since no one opposed validating the bonds, the Judge asked the city’s bond attorney, whose area of expertise this is, to come back to her by November 15 with drafts of two final orders for her signature. Both orders will validate the bonds.

Validation Order May? Or May Not? Include Location

One order will include the language of the location in Martin Luther King, Jr. (MLK) Park. The other will validate the bonds, but will include no language about the location. After she receives the two draft orders November 15, the Judge will decide which order to sign. Either way, the bonds will be validated.

Meanwhile, a separate suit, this one filed in the Appellate Division of the Ninth Circuit, seeks to determine whether the petitions submitted to the City by the Save Our Library WP PAC constitute a Referendum or a Citizens’ Initiative.

Are the Petitions a Referendum?

Or a Citzens Initiative?

Final Decision May Be Up to the Voters

If the Commission does not pass the ordinance, then the ordinance will go on a ballot and it will be up to the registered voters in Winter Park to decide whether the ordinance passes or fails. In both cases, only a simple majority is required.