On the Branding of the Winter Park Library

On March 26, 2018, the concept of creating a unique brand for the to-be-developed new Library and Events Center was brought to the Winter Park Commission. This concept arose from the Library and Events Center Task Force based on a recommendation by Sam Stark at the January 24, 2018 meeting of that Task Force. The recommendation presented was to use ‘The Canopy’ as the brand; this, is in spite of there being a local business already using that brand – the Canopy Café’.

The Commission made no determination at that meeting, but asked that the item be brought back with some style guides. This occurred on April 9 when a number of visuals were presented. These proposals included:

Winter Park Library at the Canopy 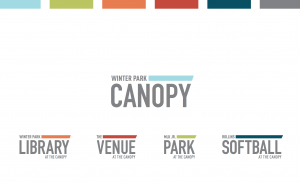 On April 09, the Commission did not take a position, though Commissioner Seidel did highlight a concern about a ‘potential annexation’ of MLK Park.’ The proposal was tabled for further discussion at the next Commission meeting.

The topic did not appear on the agenda of the April 23 meeting; but, a number of members of the public (including myself) did raise the topic during the Citizen Comments part of the agenda. None spoke in favor of the branding concept; all were opposed.

To my mind, it is unclear why these new structures demand a unique brand. We already have a strong brand – Winter Park! Why must this be undermined? And, to suggest that MLK Park, and everything in it, should be a subset of the Canopy is to add insult to injury!