Will City Strike a Fair Deal to Buy Bowling Alley?

Will City Strike a Fair Deal to Buy Bowling Alley?

Some Say It’s a High Price to Pay 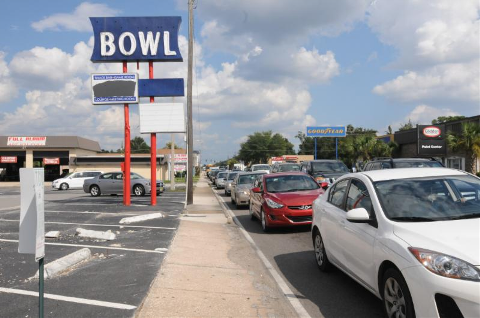 September 18, 2014 – High Noon. City Manager Randy Knight called a joint meeting of the Community Redevelopment (CRA) Advisory Board and the Parks & Recreation Board to discuss the purchase of the Fairbanks Avenue Bowling Alley at 1111 W. Fairbanks Ave. The two boards met at the Winter Park Country Club golf club house.
Scott Fish, of UP Developments, LLC, developer of the new Whole Foods, has contracted with Rollins College to purchase the bowling alley for $2,950,000. Fish is willing to assign his contract with Rollins to the city, so the city can buy the bowling alley property to extend Martin Luther King, Jr., Park.

The city will waste no time waiting until after the visioning process to seize the opportunity. The contract between UP Developments and Rollins is scheduled to close October 27, creating urgency among city staff to reach a decision. The matter will go before the CRA Board at 2:30 Monday, September 22, and will be on the agenda of the commission meeting which immediately follows.

Rollins purchased the bowling alley property in the late spring of 2013, when it looked like Harper-Shepherd Field would become a Minor League baseball stadium. Rollins needed space for other teams that use Harper-Shepherd. Being next to Martin Luther King, Jr., Park, the bowling alley property was an ideal location for Rollins to expand their playing fields.
When it became clear that baseball would not be coming to Winter Park, however, Rollins no longer needed expansion room and sought to sell the property. UP Developments, LLC,, stepped in and contracted to buy the property from Rollins.
Apparently, the city has been interested in the bowling alley property for some time, with an eye to expanding MLK Park and mitigating some of the traffic problems on Fairbanks. When they approached Scott Fish about it, Fish agreed to assign his contract with Rollins to the city, so that the city can buy the property from Rollins and UP Developments will withdraw from the transaction.

City purchase of this property would expand MLK Park by approximately 1.6 acres, allowing for a non-regulation sized playing field. It would also create an additional 100 parking spaces for the park and for business establishments along Fairbanks and 17-92. Preliminary plans also call for an extended right-hand turn lane along west-bound Fairbanks at the intersection with 17-92.

The city proposes to pay for the property with funds from several different sources. They include:

UP Development’s contract with Rollins is for $2,950,000. According to Winter Park Communications Director Clarissa Howard, the additional $300,000 the city is willing to pay would compensate Scott Fish for “real estate fees and site plan design fees associated with the property.”

CRA Advisory Board member Daniel Butts asked City Manager Knight if he thought this was a fair price for the property. Knight replied, “It’s higher than market value,” but added that there has been no appraisal on the property.
Butts then wanted to know how much the city would lose in tax revenues. He pointed out that this expenditure would “wipe out the rainy-day fund” for CRA debt service. The debt he was referring to is on the Community Center in the Hannibal Square neighborhood. The “rainy day” fund would cover this debt service should property values fall again as they did in 2010-2011.

Land Acquisition Only the Beginning

Parks & Recreation Advisory Board member Janet Atkins pointed out that acquisition of the land was only the beginning, and that considerable additional funds would be required to demolish the building and to redevelop the property. It is also unclear who would pay for widening Fairbanks to create the right turn lane onto 17-92. She said, however, that “this is a great first step toward expanding this park.”

Parks & Recreation Director John Holland stated the land purchase would help meet the goals of the Parks & Rec Department in three ways. First, it would add park land, consistent with the Comprehensive Plan mandate to provide one acre of green space per 10,000 residents. “We are right on the line of meeting that level of service,” said Holland. He pointed out that there is a need for more multi-purpose playing fields. And, third, there is a current parking shortage at MLK Park.

The CRA Advisory Board, which voted separately, required more discussion. Daniel Butts wanted to know if the city had any other funding source. Noting that the city has reserves of $27 Million, Butts suggested the city contribute at least half of the purchase price to avoid depleting CRA contingency funds. He also urged Randy Knight and Planning Director Dori Stone to go to Scott Fish and to Rollins to re-negotiate the sale and come back with a better price. The CRA then voted three to two to approve as amended.
The measure is scheduled to go before the CRA at 2:30 Monday, September 22, and then to the Commission, which meets at 3:30 immediately following the CRA.