Similarities are especially evident in the Seat 3 race between entrepreneur Anjali Vaya and attorney Kris Cruzada.  In the Seat 4 race, however, stark differences are the rule between incumbent Todd Weaver and challenger Elijah Noel. 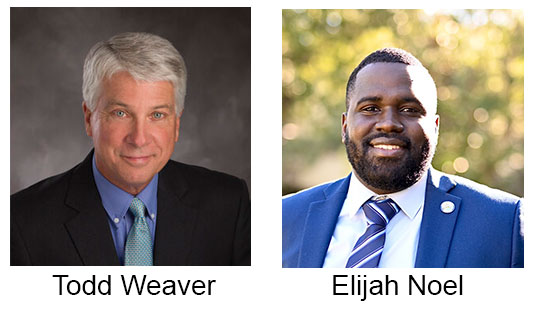 In recent forums and debates, Weaver, who is running for his second term, touted his record on issues such as green space and development and endorsed all six city charter amendments on the ballot. An aerospace and mechanical design engineer, he attended the University of Central Florida.

Noel, a 2020 Rollins College graduate with a degree in international business, sees little to like in the current commission. He accused the board of seeking more green space than the city needs and trying to concentrate power in the hands of a few. He asked for the votes of people “discontented with what the city commission is doing.”

A two-year resident of Winter Park, Noel manages a downtown Orlando lounge. He previously worked on the campaigns of former mayor Steve Leary and commissioner Sarah Sprinkel. “I’m running because I’ve noticed a lot of change in the mindset of the city commission, a change from forward thinking to a lot more stagnation,” he said.

Weaver, on the other hand, said he is proud of the current commission and its handling of pandemic-related economic challenges and development. In an effort to achieve unanimous votes, he said, the commission often negotiates during debate on decisions. “Everyone gives and takes a little bit. That was lacking when I first became commissioner.” Weaver has lived 25 years in his Lake Bell neighborhood, which was annexed into Winter Park in 2004. 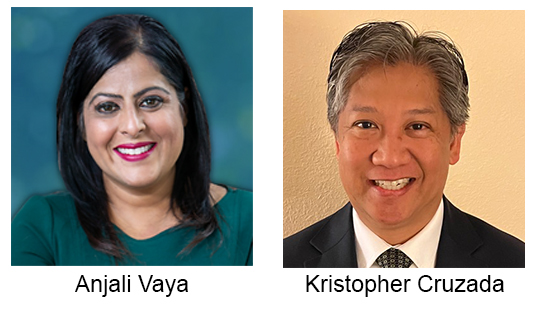 In the Seat 3 race, Anjali Vaya and Kris Cruzada both have expressed support for buying the Winter Pines golf course. Both said the Post Office should stay at its current downtown location if possible, but the city should be prepared to negotiate if the Postal Service decides to move. If the city acquires the site, they both said, the land should become green space. Both endorse the proposed charter amendments on the March 8 ballot.

The two bring differing backgrounds and professional experience to the race, however. Cruzada has degrees and work experience in both accounting and law — skills he says would serve him well as a commissioner dealing with budgets, financial analyses, codes and statutes. He has a sole-practice law firm and also is a director in a family-owned land-management business. Cruzada spent his childhood in Winter Park and moved back in 2006. He serves on Orange County’s Development Advisory Board.

Vaya’s strength is in technology. After earning a master’s degree in healthcare administration and working in that field, she developed a furniture e-commerce website and then formed a technology consulting business in the Northeast. A native of Zambia, she became a U.S. citizen in 1999 and moved to Winter Park in 2007. She says her ownership of two technology businesses helps her understand the needs of small business and the importance of good communication. She is vice-president of the Indian American Chamber of Commerce and sits on the citizen advisory board to Winter Park’s Community Redevelopment Agency. She ran unsuccessfully for the Orange County Commission in 2020.

In debates, Noel has accused the city of wasting money turning the Progress Point lot on Orange Avenue into a park and buying the Winter Pines Golf Course when the money would be better used to fix roads and sidewalks. “We’re spending a lot of money on a lot of property we can’t afford to maintain.” Calling himself a “huge advocate for green space,” he said he would emphasize quality over quantity.

Weaver made no apologies for wanting to add more green space. “I want to keep the park in Winter Park.” The city has a budgeted schedule for repaving its hundreds of miles of roads and it already owned the Progress Point site, he said. The city won’t need taxpayer money to buy the Pines golf course or maintain it because “it’s a profitable business,” he said.

Both Vaya and Cruzada agreed with the commission’s desire to buy the Pines golf course and described the $7.4 million purchase price as a good deal. Vaya praised the commission for its debate on the deal. “There was a lot of dialogue and transparency in the meeting that night.” Cruzada, who lives along the golf course, said the city followed the rules. He noted that the city charter doesn’t require referendum approval to buy parkland. He said the city should identify more money-making opportunities at the course so it can pay back the bond issue quickly.

Noel criticized the city commission for rejecting a task force’s advice for the redevelopment of Orange Avenue. If elected, he would “listen to the experts,” he said. “It’s our job as leaders not to assume we’re experts on building and zoning codes, but to study on it, listen to residents and make the best judgments.” The city should install a money-making use at Progress Point Park to help pay for its maintenance, he said, so it is “not just another park with more trees.”

Weaver said the commission was justified in repealing the initial Orange Avenue redevelopment plan, which was proposed by property owners and recommended by city staff. “It was very controversial.” The current plan is “more fair,” he said. He noted that the revised version includes incentives for developers to provide workforce housing.

Weaver and Cruzada described as “no brainers” the charter amendments requiring four votes for irreversible decisions. They both gave examples. “We don’t want to make it easy to build in wetlands,” Weaver said. Four votes would ensure that the city has a compelling reason for selling its property, Cruzada said. “Once you sell, you can’t get it back,” he said.

Vaya noted that the city previously required supermajority votes for such decisions. Asking voters to put the requirement in the city charter “will go a long way in protecting the city’s charm” and will reduce divisiveness, she said. Noel opposes all six amendments. He described the charter changes as a way of “keeping the power in one place” and reiterated that the city isn’t “hearing enough from its residents.