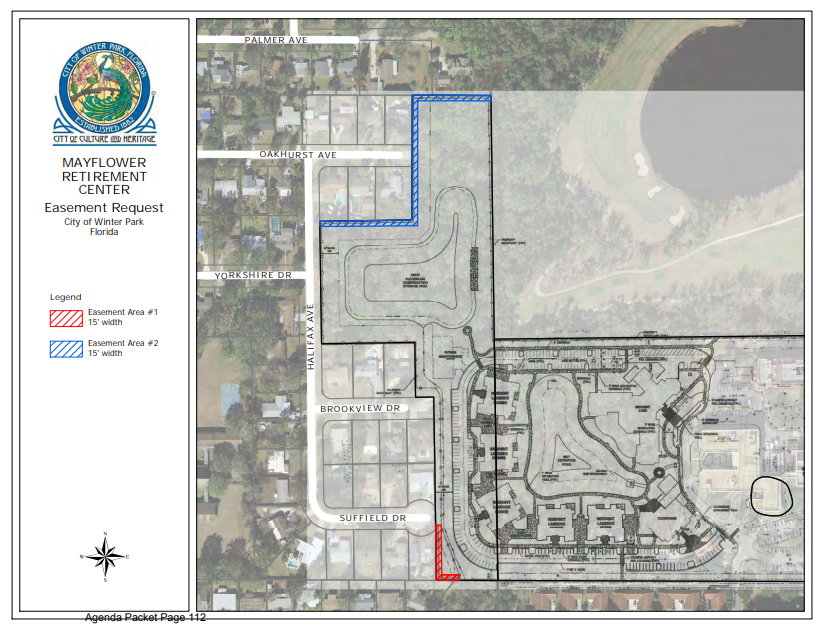 When the Mayflower retirement community came before the July 22 Commission seeking final approval for plans to expand their facilities and services, most of the discussion centered not on the expansion, despite substantial changes to the version that received preliminary approval in 2018, but on the City’s request for an easement along the western border of the property where it could maybe, someday, build a 15-foot wide path for bikes and pedestrians. The City wanted to create a route that removed bikes and pedestrians from the dangerous motor traffic on Lakemont Avenue.

In January 2018, the Mayflower received preliminary approval to add a new three-story health care center and a one-story memory care center, a one-story club house and four separate three-story residential buildings. Conditions of approval were that the Mayflower would “explore” a bike path, install buffer landscaping for adjacent properties and come up with a storm water plan approved by the St. Johns River Water Management District.

A year and a half later, in addition to the new club house and additional residences, the Mayflower wanted to combine the health care facility with the memory care center in a single four-story structure to make room for a fifth 24,000-square-foot residential building. The plan presented to the Commission displayed easements along the western border of the Mayflower property for the bike path. The easements are indicated in red and blue on the map above.

Commissioner Sarah Sprinkel pointed out that when the original request came before the Commission in 2018, the Mayflower was asked to “explore” a bike path that would serve as a northeast connector trail, but the path was not a condition of approval. “We have not, as a Commission, even approved this bike path,” said Sprinkel.

Turns out the bike path easement was a staff recommendation, which City Code, Sec. 58-90, “Conditional Use,” allows the City to impose. Code says that if an applicant brings for final approval a project in which the height has changed by more than one foot and the floor area has changed by more than 250 feet, the City can re-open all negotiations. Planning Manager Jeff Briggs cited the intent of the 2010 Comprehensive Plan to get cyclists and pedestrians from Lakemont up to Palmer, and said staff believed there was an opportunity for that along the western border of the Mayflower property, as had been discussed in 2018.

Commissioner Greg Seidel stated while an easement is no guarantee the City will build the bike path, the Mayflower’s failure to grant the easement would guarantee it won’t be built. Seidel suggested establishing a 10-year “sunset date” on the easement – if no bike path is built there within 10 years, the easement will cease and the property will revert to the Mayflower.

Addressing Commissioner Spinkel’s ‘heartburn,’ Commissioner Carolyn Cooper pointed out that since the Mayflower came back for final approval with a project that was substantially different from the one that received preliminary approval, “. . .we can start all of these conversations all over again. . . . Alternatively,” said Cooper, “the Commission also has the right to ask the developer to revert to the original plan, since the substantial changes have not received preliminary approval by the Commission.”

Commissioner Todd Weaver addressed the concerns of the Mayflower residents for their own pedestrian safety on the property. He pointed out that between the fence and a 50-foot landscape buffer separating the proposed bike path from the Mayflower property, the residents would not even see the path, let alone encounter bicycles. Weaver recounted a recent Metroplan meeting at which a map of the inter-connected greenways in Orange, Osceola and Seminole Counties showed a big ‘dead zone’ at the center — Winter Park. “It is City staff’s mandate to complete our Comprehensive Plan, and part of that is our mobility,” said Weaver. “This connectivity plan has been 10 years in the making, and we are 10 years behind every other city in our area.”

We Are Asking for the Opportunity

Weaver went on to explain that the City had neither planned nor funded the actual path, that it was simply requesting an easement for the opportunity to do so at some future date. He stated that there would be no design and that no plans would be made without including Mayflower residents, surrounding neighbors, City staff and the Commission.

Everyone Wants Trails – Just Not In Their Back Yards

Public commenters criticized City government for its failure to come up with a well-defined plan for greenway connectivity. Citizens hastened to assure Commissioners that they were not against bike and pedestrian paths, as long as they are far enough away from their property.

Attorney Tripp Cheek, who is a member of the law firm representing the Mayflower, Winderweedle, Haines, Ward & Woodman, PA, but who spoke as a private citizen, cited a case in which the St. Johns River Water Management District required a developer to improve a wetlands property he did not own in return for granting him a permit to develop his own property. The developer successfully sued the District, claiming the wetlands improvement had nothing to do with his own development and should not be used as a condition for approval. Cheek cautioned the Commissioners against asking for the bike path easement, warning they were “asking for a problem” in the future.

Cheek’s remarks drew a sharp response from Seidel. “I don’t appreciate it when people threaten me with a lawsuit over something I’m trying to decide,” said Seidel. “That is not going to sway me one way or the other.” Seidel said he would defer to the City Attorney.

The Problem is Lakemont

A significant hurdle to the decision is the City’s failure to adopt a connectivity plan. One by one, each Commissioner admitted that where the ball had been dropped was right in their laps. “We didn’t do it because we couldn’t,” said Sprinkel, “we didn’t have agreement up here. Now we need to do something about this.”

“I know that our Advisory Boards have worked hard on this issue,” said Cooper. “They’ve done planning, but their plans have been ‘accepted,’ not ‘adopted.’ I’m glad [City Planning Director Bronce Stephenson] has a different impression about this plan.”

Weaver asked if people in the audience would favor using the “complete streets” treatment on Lakemont that has been employed on Denning. A cheer and a show of raised arms arose from the back of the chamber. Weaver then asked how many of those people would agree to have their taxes raised in order to pay for an improved streetscape on Lakemont. Again, a strong show of support.

Leary Stands by the Mayflower

Before calling for a vote, Mayor Steve Leary stated that in the nine to ten years he has been going to the Mayflower, he has made a commitment. “If the Mayflower doesn’t support this, I’m not supporting it,” said Leary.

When the vote was called, Seidel offered an amendment requiring 15- to 20-foot wide easements at the western border of the property, with a ten-year sunset, for the purpose of building the path for non-motorized transportation, and the City would bear the cost of any improvements required to construct the path. The amendment passed 3 – 2, with Leary and Sprinkel dissenting.

Before calling the vote on the final approval, with Seidel’s amendment, Leary offered the Mayflower the opportunity to pull or table the application prior to the final vote.

At least half a dozen lawyers headed for a huddle at the rear of the chamber, with attorney Cheek at the center of the pack.

In a confusing turn of events, Seidel withdrew his original amendment for the expanded easement, which had already passed, and offered a new amendment that granted the Mayflower’s request, which passed on a 4-1 vote. The main motion, to approve the Mayflower’s plans as presented and with only the smaller easement, then passed on a 5-0 vote.