Michael Ott Goes for the Gold 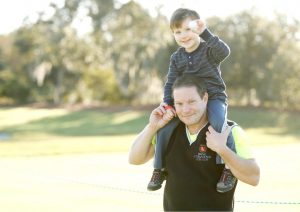 Meet Michael Ott. He appears to be a healthy, normal 5-year-old – that is, until you put a golf club in his hand. Then, he’s all business.

Michael lives here in Winter Park with his Mom and Dad and his sister. He will begin Kindergarten in the fall at St. Margaret Mary.

Michael has been playing golf since he was two. His father, Rich Ott, says Michael has only had two formal lessons, from Justin, the former head Golf Pro at the Winter Park County Club. One golfing enthusiast, upon hearing about this 5-year-old phenom, quipped, “I’ve got candy bars in my golf bag that are older than that!”

Michael plays golf every chance he gets. He regularly hits the ball 100+ yards. He told me that one time he hit it 121 yards. Since Michael is still fairly small in stature, that would be approximately 121 times his height. Eat your hearts out.

When I asked Michael what his secret is, he said, “I just putt it and it goes in.”

Michael has become something of a celebrity in Central Florida golfing circles. This picture appeared on the cover of the Winter Park Parks & Recreation 2014 Annual Report. 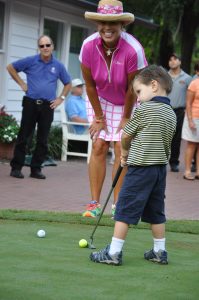 When I asked Michael if he thought he might win the tournament, he said quietly, “Yes.”

Rich Ott has promised to keep the Voice updated on Michael’s progress in San Diego. Watch for updates over the weekend.