“Wish You Were Here: Hotels & Motels of Winter Park” 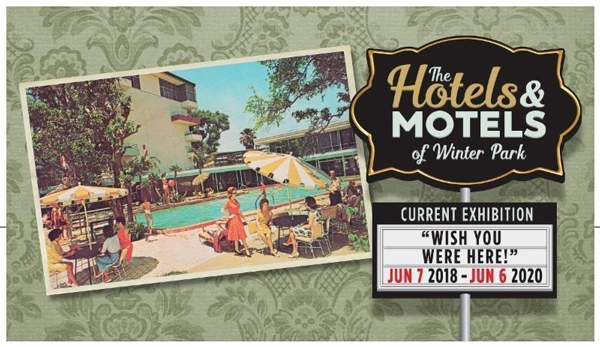 Mark your calendar – Thursday, June 7, 5:00 to 8:00 pm – The Winter Park History Museum will open its new exhibit, “Wish You Were Here: The Hotels and Motels of Winter Park.” This is a family friendly event that will feature food, friends and the music of Frank Sinatra.

The vision Loring Chase and Oliver Chapman had for Winter Park consisted of two key elements. One was Rollins, established 1885, and the other was luxury hotels that would appeal to the wealthy ‘carriage trade’ from the northeast. To that end, they set aside three elevated five-acre lakefront lots for the large luxury hotels that became the Virginia Inn, the Seminole Hotel and the Alabama.

Every Hotel Lobby Had a Land Sales Office

The purpose of the hotels was to appeal to the type of guest who was wealthy enough to invest in the town and intellectually liberal enough to create a community that would be attractive to the academics who would create Rollins.

The lobby of every luxury hotel featured a land sales office offering land for homesteads, commercial development and citrus production. Tours of citrus groves were a central feature of the sales presentations.

Hotels at Center of Community Life

As time passed, Winter Park became more established and the large hotels became centers of local community activity. Residents could buy memberships to use the hotels’ recreational facilities. The hotels provided a place for larger business and social events. It is fitting that Rollins has come full circle with the Alfond Inn, which serves as a watering hole for locals and as the repository for the Alfond family’s extensive collection of contemporary art – in addition to accommodating visitors from around the world.

The show will include a study of smaller boarding houses and hotels that accommodated the working class tourists and staff who traveled with the wealthy luxury hotel patrons. There will also be a section devoted to the classic Florida motels that grew up around Lake Kilarney and 17-92, which became popular tourist destinations in the 1940s.

The event is free and open to the public. For more information, visit www.wphistory.org