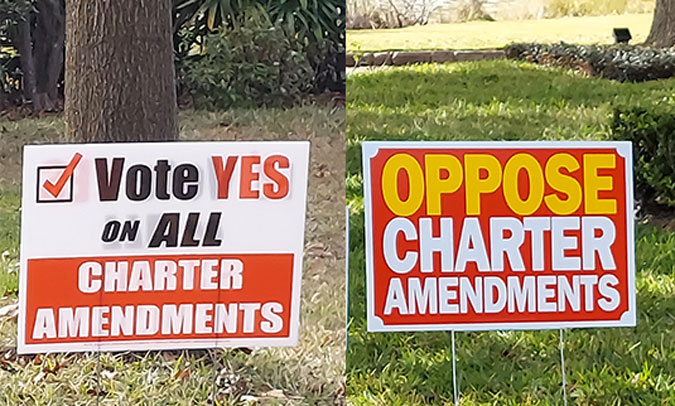 To develop or not to develop; that’s a question Winter Park has debated for decades.

These days, with little unused space left in the city, the question has more to do with redevelopment. Should a golf course be developed as a subdivision? Should a lakefront residential lot become part of a commercial project? Should a swampy parcel be filled with dirt to build a home?

How the city should deal with such questions is the subject of six city charter amendments on the March 8 ballot. Five would set a higher bar for major land-use decisions involving wetlands construction, lakefront zoning, parks, residential density and the sale of city-owned property. A “supermajority” vote of 4-1 would be required for approval in certain situations, instead of a simple 3-2 majority. The sixth amendment would require an additional public hearing if a project changes considerably after it was submitted.

Sentiment for and against the amendments is evident. E-mails are clogging inboxes. Signs are popping up all over town.

Opponents sympathetic to development say the amendments set too high a bar and would make future land-use change impossible. Supporters concerned about preserving the city’s character say the amendments wouldn’t stop growth but would result in more compromise and public involvement for major changes.

PAST CLASHES OVER DEVELOPMENT

Tension between commercial and residential priorities has a long history in Winter Park. In the 1950s, as Interstate 4 was being designed, a push to extend Lee Road to downtown Winter Park failed as a result of residents’ objections. A decade later, neighborhood opposition squelched the dream of two consecutive mayors who wanted highway bridges built over Lakes Osceola and Killarney. The mayors’ priority was to move traffic easily to the new university east of the city.

Every decade since has seen clashes over land use. In the 1970s, the battle was over building heights. In later years, it was over road widenings, new subdivisions and the expansions of such established entities as the Winter Park YMCA, the Winter Park Hospital and Rollins College.

In the late 2000s, the biggest issues were the proposed SunRail commuter train and the Carlisle mixed-use high-rise. SunRail and its downtown station prevailed. The Carlisle – a massive condominium and retail building – didn’t. The high-rise would have loomed over Central Park in the current Post Office location. A two-year fight ended with the city buying out the developer with reserve funds and residents’ donations.

Among those supporting the charter changes are all current city commissioners and 1000 Friends of Florida, an organization that advocates for smart growth. The nonprofit group, which endorsed all six amendments, has advocated for a decade for supermajority votes when land-use changes can affect a city’s unique sense of place. Last year, it reaffirmed its support of supermajority votes. Its president, Paul Owens, said such changes “should have the highest level of support” and deserve more than a simple 3-2 majority. You can find the 1000 Friends of Florida document here.

Other amendment supporters say a 3-2 vote is too easy for major land-use changes unlikely to be reversed. Take the sale of rare city-owned land, says Winter Park Mayor Phil Anderson. “Once sold, the opportunity to use it for vital city operations is gone.” The same irreversibility applies to rezoning parks, he says, noting that currently it would take only three commission votes to decide to sell the West Meadow of Central Park and rezone it for offices and condos.

Anderson notes the importance of carefully considering land-use changes that could affect property values and alter the city’s quality of life. For such changes to pass with a 4-1 vote, commissioners would have to discuss them thoroughly and reach consensus. Compromise would be likely.

Opponents of the charter changes include former mayors Steve Leary and Ken Bradley and former commissioners Pete Weldon and Sara Sprinkel. Weldon filed last month to create the Winter Park Governance political action committee, which mailed out fliers against the amendments. The bulk of the PAC’s budget was contributed by real-estate developer Allan E. Keen’s company, Keewin LLC, which gave $10,000.

Weldon’s posts online describe the issue through the lens of past commission decisions. He accuses the current commission of being afraid that its use of Progress Point on Orange Avenue as a park could be overturned in the future. He sees the amendment on lakefront lots to be tied to the since-abandoned proposal for a hotel on Lake Killarney. The amendment dealing with residential density increases arose from the Orange Avenue Overlay debate, he says.

The amendments “will deter investment, paralyze Winter Park, and make serving on the city commission meaningless,” Weldon said in a Jan. 6 post.

Central Florida is no stranger to supermajority votes. Neighboring Seminole County, for example, recently required them to dispose of natural land that the county obtained for conservation.

Supermajority votes aren’t new to Winter Park either. Previously, the city code required them for such decisions as changes to the city’s comprehensive land-use plan. But that requirement was dropped in 2013 when Ken Bradley was mayor. All mention of supermajority votes was scrubbed from the code.

Dropping the code requirements was easy because code changes need only the vote of three commissioners.

Changing the city charter, however, is much harder. Commissioners must ask voters for approval. So, if a majority of city voters approve the amendments this election, it would take a majority of city voters to remove them in the future. Think of the charter as a local constitution. It defines the essentials of how a city government works, its organization, powers and functions. Voters alone can amend it.

In the March 8 election, Winter Park voters will decide whether to set that high bar for major zoning and land-use changes in the future.