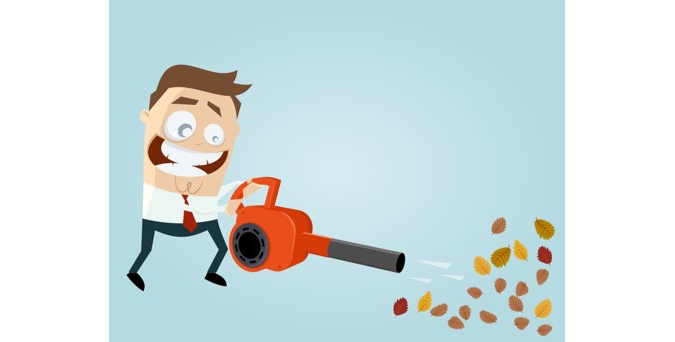 If the reverie of your peaceful morning walk has ever been shattered by the reverberations of a leaf blower, or if you’ve been jolted awake when your neighbor’s lawn crew fired up, or if your Zoom meeting was drowned out by a landscaper working directly beneath your office window, help could be on the way.

Hundreds of cities across the country have significantly curtailed or even banned the use of landscaping tools powered by noisy two-stroke gas engines.  Leading the way were cities in California, beginning in the 1970s.  Places in the northeast followed suit.  Now even municipalities in Florida have jumped on the bandwagon to improve the quality of life for their residents — cities like Palm Beach, Key Biscayne and Naples.

Recently, the City of Winter Park emailed residents a comprehensive survey about leaf blowers. The survey is still on the City website, and the link will be live through October 6. If you haven’t yet completed the survey, you can do so by clicking here.

The Keep Winter Park Beautiful and Sustainable Advisory Board created the survey to gauge residents’ sentiments regarding the possibility of imposing new restrictions on the types of leaf blowers used and/or the hours of operation.

If the will is there, citizens must take the lead

If the use of gas leaf blowers is to be curtailed in Winter Park, citizens must lead the way. City leaders generally have little appetite for imposing new restrictions unless residents are clamoring for them. It is up to all of us to educate ourselves, understand the tradeoffs and tell City leaders what we think.

What’s so bad about leaf blowers anyway . . . besides the awful noise?

The source of the problem is the antiquated two stroke engine design which has little improved since the early 1900s. These relics of the past slosh around a mixture and oil and gas then spew out up to one-third of the fuel mixture in a toxic aerosol. Ever notice that scent of benzene wafting in the air near a lawn crew? This is even more dangerous for the worker than it is for the environment.

Jim Fallows wrote in the April 2019 Atlantic magazine, “By 2020, gas-powered leaf blowers, lawn mowers, and similar equipment in the state could produce more ozone pollution than all the millions of cars in California combined. Two-stroke engines are that dirty. Cars have become that clean.“

The noise is inescapable

Gas-powered leaf blowers are demonstrably too loud. It is not unusual for backpack blowers to register up to 110 decibels near the operator. This is not safe. OSHA permits exposure up to 90 dBA for an 8-hour day. For each 5 dBA over that, exposure time must be cut in half. Do the math — OSHA does not permit workers to be exposed to the level of noise emitted by backpack gas blowers for more than 30 minutes a day. Studies show work crews will experience hearing loss after about 10 years of use.

Gas-powered blowers emit a low-frequency sound that seems to follow you everywhere.  Unlike high pitched noises, like drills, the racket from gas blowers travels a long distance and penetrates walls and windows. There is no escaping this noise unless you get in your car and drive to Starbucks, praying that they too are not seizing the opportunity to blow clear the premises.

If gas-powered blowers are bad, why do landscape contractors love them?

Three guesses. It’s the bottom line. The fastest, and therefore cheapest, way for a landscape contractor to move debris is not with a rake and broom or with an electric blower, it’s with that ear-splitting, particulate-spewing gas blower. And if the majority of Winter Park residents are more worried about the size of their landscaping bills than they are about worker safety, the environment and the general quality of life, we might as well stop talking right now.

Electric blowers are much quieter, but don’t expect silence. They still create some noise, just not that wall-piercing low-frequency noise generated by the two-stroke motors in gas-powered leaf blowers.

How does performance stack up to gas?

While the performance of battery-powered equipment is catching up, they are not yet able to blow 200-MPH winds out the end of the nozzle. They are great for clearing dry clippings, but moving heavier wet debris may take longer. And time is money.

The biggest problem with battery blowers is the initial capital expense for contractors.  The batteries are expensive.  And with the current state of technology, a contractor will either need to invest in multiple batteries or use a generator.

Naples, FL is currently undergoing the transition to battery-powered blowers. David Mahl, a Naples-based landscape contractor with a 10-man crew explained the tradeoffs of switching to electric. He said it cost him about $10,000 to buy new equipment. He is not happy with the monetary costs of the switch, but understands it is the wave of the future and that all landscaping tools will eventually be battery operated. He had feared clients might find the results not as tidy but, so far, clients are happy with quieter blowers. He hasn’t decided if needs to pass along a price increase.

Two-stroke engines have been regulated out of use in almost all other applications. Lawn equipment for homeowners is already trending toward battery power, but landscape contractors are dragging their feet. No one wants to incur the expense of switching when the competition can keep using cheap, noise-polluting equipment.  That’s where Winter Park has to step in.

If you want some peace and quiet, let your Mayor and Commissioners know. Write  mayorandcommissioners@cityofwinterpark.org