At its April 27 meeting, the Commission led off discussion with a tentative plan to lift restrictions on public facilities. Effective May 1, the golf course opens with social distancing and other restrictions. For complete information, go to cityofwinterpark.org/golf

Some retail shops and restaurants will also open on a limited basis. The Tennis Center, Boat Ramps, Dog Park and Farmer’s Market remain closed for the time being. Sadly, hair salons did not make the cut, either.

Commissioner Carolyn Cooper pointed out that we are nowhere near having a full understanding of the novel coronavirus, citing reports in the Washington Post and elsewhere describing young infected victims, who were asymptomatic but whose vital organs were being attacked by the virus and who had suffered blood clots and strokes, leaving some permanently disabled or deceased.

In a passionate plea for the safety of doctors and other medical personnel, Cooper urged citizens to have patience and to observe protective protocols. “Masks,” she said, “are less to protect the wearer than they are to protect others from infection by asymptomatic people who are carrying the virus but who don’t know they are. We need adequate testing,” she stated, “before it is safe for us to go back to our normal lives.

”Consider the health and safety of those we turn to for help when we are least able to help ourselves,” she urged. 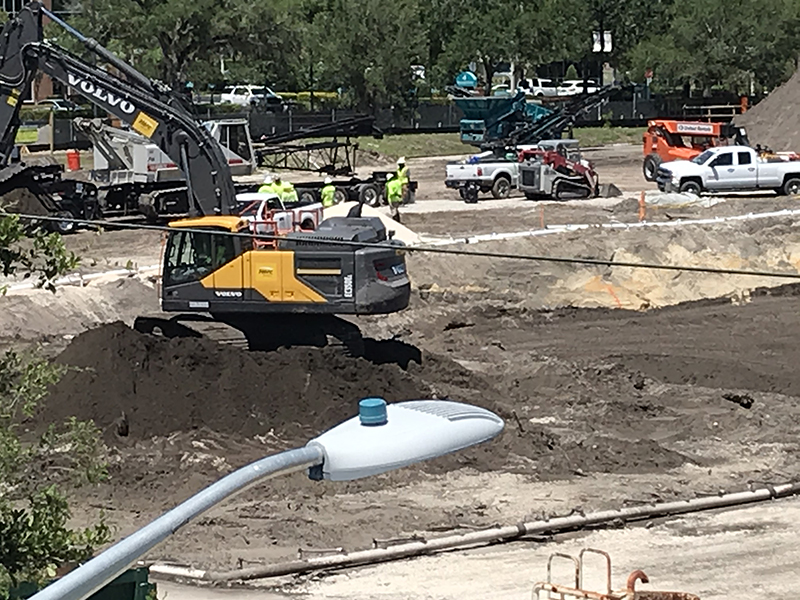 After several months of distraction – like city elections, coronavirus, chickens — the Library-Events Center project once again floated to the surface – but the discussion was about what lies beneath the surface. Demucking and soil remediation of the site is underway. Brasfield & Gorrie is doing the work.

Go Back a Year to the GMP

Last year, at a May 2019 Commission Meeting, the contractor, the architects, the engineering firm and the owner’s representative for the library-events center project presented a project budget that included the long-awaited Guaranteed Maximum Price (GMP). In that budget, there was an allowance for soil remediation. During the meeting the estimated price, which was first at zero, climbed to $100,000, then to $150,000 and finally settled at $180,000. It was an ‘allowance’ instead of a line item cost, because at the time the contractor, Brasfield & Gorrie, and the geotechnical engineer, Ardaman, were not sure what they would find when they began to dig.

Commissioner Carolyn Cooper stated that she had consulted several architects not involved in the project who indicated the amount was insufficient. When Cooper brought this up at the May 2019 meeting, city staff present at the meeting dismissed her concerns as unfounded. “We’re dealing with professionals,” they said, “and they know what they’re doing.”

In a communique with Commissioners and Senior Staff dated April 24, 2020, Knight wrote: “The good news/bad news. As you may recall, the commission chose to have the contractor do the demucking instead of city staff. The good news is the city can’t be blamed for delays in it taking three to four weeks longer than projected. The bad news is we are paying contractor costs instead of city costs for the labor and overhead. The allowance for this work . . . based on Ardaman’s projections of unsuitable soil was $180,000. We asked [Brasfield & Gorrie] to give us a best and worst case scenario for the remaining 5 sections . . . . In the worst case scenario this will hit the contingency for $318K. In the best case scenario it will be over by $227K.”

According to the memo, Brasfield & Gorrie had just completed week three of demucking and was projecting an additional five weeks to finish the job. They have found more unsuitable soil than Ardaman projected and have had to dig four to five feet deeper in some places. They will also have to demuck further to the west than originally projected.

Acknowledging that the City will likely have to bear the burden of these costs, Commissioner Cooper urged Monday night that, in light of the assurances offered in the May 2019 meeting, “the City should have some opportunity for cost sharing – meaning, those representing the City’s interests should remind [Brasfield & Gorrie] of that.”

The Winter Park Sun reported in 1958 that the 21-acre site now known as MLK Park, recently acquired by the City by purchase and by condemnation, was in bad shape. “One-third is covered by muck which at some places goes 40 feet deep,” the Sun reported. “Heavy structures cannot be erected because of the swampy and soft condition of the land.” Then City Manager Clark Maxwell told the Sun, “The entire area has to be investigated and the ground tested before it is possible to determine how to develop it.”

The Sun went on the report, “Mr. Maxwell thinks that it would be a good idea to pump out the lake [Mendsen] and enlarge it considerably and use the residue to fill and elevate the surrounding land. It seems, however, probable that soil has to be brought in to a large part of the area to give it a firm surface. Under such a plan, the swampy Mendsen Lake would become a beautiful attraction and asset.”

Delays Are Nothing New

In a later article, the Sun reported the opening of the West New England recreation area – now MLK Park – had been delayed “because of the need to fill in much of the ground.” To supplement the soil residue they were using as landfill, Mayor Raymond W. Greene had requested contractors working on major jobs in the city to bring their construction debris to the site for use as landfill. Mayor Greene assured residents the landfill had been provided and trucked in at “no cost to the City.”

Does any of this sound familiar?