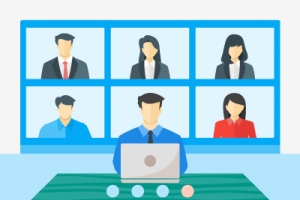 Yesterday, March 26, from 5:00 to 6:30 pm, the Winter Park City Commission held its first Virtual Meeting – and probably the first meeting ever attended by all 7 past and present commissioners. And even with 7 Commissioners present, the meeting began and ended right on schedule.

The meeting was a live-streamed Work Session on the City’s response to the coronavirus situation. Participating from home but visible and audible on computer screens across the City were Mayor Steve Leary, Commissioners Carolyn Cooper and Todd Weaver, soon-to-be-former-Commissioners Sarah Sprinkel and Greg Seidel, Commissioners-elect Sheila DeCiccio and Marty Sullivan and City Manager Randy Knight with key city staff.

The meeting was made possible by an Executive Order from Governor Ron DeSantis suspending the Florida statute that required a quorum to be present in person at a specific place. The Executive Order allows local governments to utilize media technology to hold meetings.

As with any Commission Work Session, there were no Commission votes or public comment.

Yesterday’s Work Session was a dry run for a Special Commission Meeting Monday, March 30 at 5:00 pm. At that meeting, the Commission will vote and take public comment. If you missed last night’s meeting, you can tune in Monday at <cityofwinterpark.org/cclive>

Register in Advance to Participate

In order to participate, you must register in advance. Space is limited, so do not delay. Go to <cityofwinterpark.org> and click on Access Virtual Commission Meeting Live Video Broadcast & Instructions. You will find all the information you need to register and participate.

Public comment will be taken at the 5:00 pm hour, as usual. You can comment in advance of the meeting by emailing mayorandcommissioners@cityofwinterpark.org  Emailed comments will become part of the record, but will not be read aloud. You can also comment by phone, and your comment will be recorded and will be audible on the live stream. The public comment line, which will be activated Monday at 5:00 pm, is 407-599-3410. Live comments will be monitored in accordance with City standards of decorum.

Meanwhile, although City Hall is closed to the public, the City itself is Open for Business.

Police and Fire-Rescue Departments are at full staffing. The Police Department reports a decline in criminal activity and calls for service, due to fewer people being on the streets.

Fire Chief Dan Hagedorn reported that, as of yesterday, there were 2,235 reported COVID19 cases in Florida, with one fatality. Two cases have been reported in Winter Park – one is a resident and one a non-resident. Emergency crews who transported these patients to the hospital are on 14-day quarantine as a precaution, but are showing no symptoms.

Infrastructure departments such as the Electric Utility, Water & Waste Water, Code Enforcement and the Building Department are open and active.

In his discussion of the budget, City Manager Randy Knight acknowledged that the City anticipates a drop in revenue, but said it is difficult to tell at this early stage how great or small that will be or how long it will last. Knight said he does not anticipate cutting essential services for residents. He plans to present the Commission with a revised budget for this Fiscal Year.

Utility cutoffs for non-payment have been suspended, and staff is working on programs to assist residents and businesses with utility payment plans. City Staff will work with the Winter Park Chamber of Commerce to help local businesses apply for loans and other financial assistance. Restaurants are allowed to offer takeout and delivery services.

City staff is working to develop virtual programs for youth and seniors. The City is considering creating a micro-loan program for businesses in the CRA. And the City Manager is looking into acquiring Federal assistance available to state and local governments.