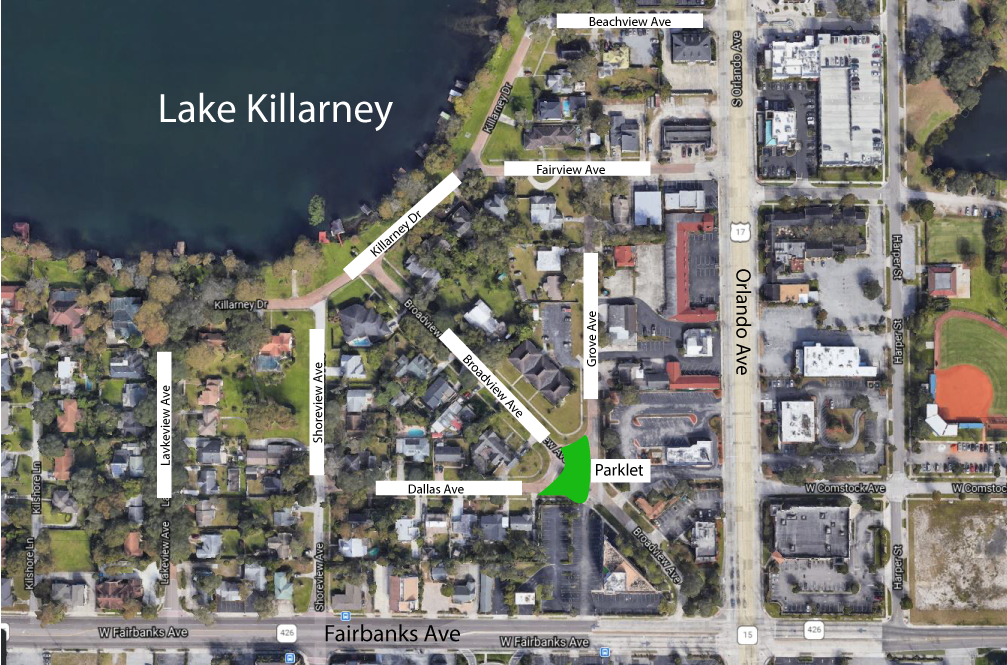 Can the City Reunite the Neighborhood?

In late January, plans to build the Henderson Hotel in the triangle bordered by 17-92, Fairbanks Avenue and Lake Killarney, known as Killarney Estates, ran headlong up against Comprehensive Plan Policy 1-J-9, which reads, “Protect Single-Family Residential Use in the Killarney Neighborhood from Non-Residential Land Use Encroachment. The City shall preserve and protect the single-family residential land use within the Killarney neighborhood from commercial and office encroachment . . . .”

Just before midnight on January 27 — before the Commission could vote on Commissioner Marty Sullivan’s motion to deny – attorney for developer Adam Wonus withdrew the application to build the hotel. It was Game Over.

Despite the outcome for the Henderson, Adam Wonus’s two-year effort to win approval for his project produced some positive results for this neglected corner of Winter Park by shining a light on serious traffic problems and general infrastructure neglect by the City. For years, Killarney residents had been plagued by cut-through traffic trying to avoid the major intersection of 17-92 and Fairbanks Avenue, and the development of way-finding apps has only made matters worse as Waze and others direct drivers going from 17-92 to Fairbanks (or the reverse) through the back streets of the neighborhood.

City Planners to the rescue

When Adam Wonus began meeting with the Lake Killarney neighbors about his proposed hotel, they described their traffic woes and Wonus alerted City Planners to their need for help. Commissioners and City staff met with the neighbors and decided to field test a traffic barrier on the southern leg of the intersection of Killarney Dr. and Fairview Ave. The City also created a permanent physical separation of Grove Ave. from Dallas Ave. and Broadview Ave. Adam Wonus even paid for the planter bollards that formed the barrier at Killarney Drive and Fairview Ave.

The traffic calming measures worked, cut-through traffic has slowed to a trickle and most Killarney neighbors are living happily ever after.

The northeast part of the neighborhood is a mix of residential, commercial and office, and part of it fronts on 17-92, but there are still residential lakefront parcels in that area which most of the Killarney neighbors and the all of the City Commission wish to protect from commercial development.

How to put the neighborhood back together?

At a special Commission meeting February 11, 2021, the Commission directed staff to come up with additional options to protect the residential lakefront property and to reintegrate those properties into the existing transportation network. City staff also has initiated negotiations with mapping companies to eliminate cut-through routes through the Killarney neighborhood.

Decisions on traffic solutions must be based on future land use

Commission agrees to future workshop to discuss future land use

Of the possible solutions to the traffic problems, the City’s first option describes measures that either are already in place or well into the planning stages. It includes the planter bollard barrier at Fairview and Killarney Dr., and a small park area that would cut off the connection between Broadview, Dallas and Grove Avenues. This area already has been cordoned off with temporary barriers and cones. The only thing missing was a funding source. To build the “parklet,” as it is called, the City had to find $165,000 in additional funds.

Commissioner Sheila DeCiccio made a motion to move forward with this option, to leave the bollards as they are, build the ‘parklet’ with $165,000 from the Parks Acquisition Fund and to hold a workshop to discuss future land use and a more permanent traffic solution based on the future land use. Commissioner Todd Weaver seconded. Weaver amended the motion to add approximately $3,600 to reimburse Adam Wonus for the cost of the bollards, with a second from Commissioner Marty Sullivan.

The main motion, as amended, passed on a 5-0 vote.