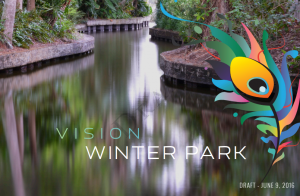 After more than a year’s work, the Visioning Steering Committee voted yesterday to approve their final draft report. The report will be presented to the City Commission for approval July 11.

Winter Park vision statement has gone from “The city of culture and heritage,” to “The city of arts and culture, cherishing its traditional scale and charm while building a healthy and sustainable future for all generations.”

Four main themes emerged from numerous meetings and conversations with the community.

This new vision of Winter Park is designed to provide a framework for the 2016 review of the City’s Comprehensive Plan, which ensures that Winter Park’s growth management plan meets state and federal regulations as well as “the stated vision for the city.”

The Vision Plan conclusion reads as follows. “This document provides an overarching direction for the future of Winter Park and establishes the foundation upon which other regulatory documents can build.”

To read the entire Visioning draft report, go to https://cityofwinterpark.org/docs/government/boards/other-info/VSC-vision-winter-park-draft-2016-06-09.pdf.