Several weeks ago, in the thick of election season, Winter Park’s Tree Preservation Board delivered its own October Surprise.

The board had proposed significant changes to the city’s Tree Preservation Ordinance earlier this year, and had been waiting for months – through hearings, workshops and citizen testimony — for the changes to be finally approved.

But then, in early October something happened that tested the board’s willingness to wait for final Commission approval of the ordinance changes:  A local developer filed an appeal, hoping to overturn a $12,375 tree removal fee required by the city’s current ordinance — an appeal that mirrored the Tree Board’s own desire to significantly reduce tree fees and replanting standards.

The developer’s appeal was heard by the Tree Board on October 18. On that day, in less than thirty minutes, the Tree Board overturned provisions of the city’s current tree ordinance and instead, voted to substitute their own proposed ordinance changes — just 3½ weeks before the City Commission would have an opportunity to vote on the changes. While discussing  their motion to waive the fee and the standards mandated by the city’s current ordinance, the board cited provisions of its own proposed ordinance changes in reaching their decision.[Video]

Nine days before the Tree Board appeal hearing, the city sponsored a Tree Ordinance Workshop where citizens debated the board’s proposed changes in anticipation of upcoming Commission hearings on the matter. At least two members of the Tree Board attended the October 9 workshop. These members and many city residents witnessed George Wiggins, head of the WP Building Department, offer a strongly worded assurance to citizens who might question the intent of the proposed changes:

“There’s an extremely important point here that I cannot over-emphasize. When you’re looking at a historic tree . . . we [city staff] have never issued a permit to remove a historic tree . . . So when you see these drastic differences [between the proposed ordinance and the current ordinance] I’m not sure that it matters much, because we’re not allowing the removal. “

However, documents obtained by the Voice reveal that two weeks before the workshop, Mr. Wiggins’ Code Enforcement department approved a permit application to do just that – remove a healthy live oak – a 39” diameter heritage tree; The same tree that would later be at issue in the October 18 Tree Board appeal. 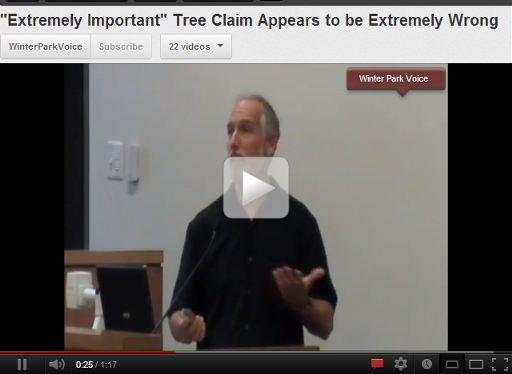 WPV contacted Mr. Wiggins, asking him to clarify the timing of the permit approval. He commented that his workshop statement “. . . was based on info I received from our arborist that must have pre-dated that permit. In addition it would be impossible to build the new home with the location of the tree in the middle of the lot.”

Public records obtained by the Voice show that once the tree removal permit was approved, the permit applicant, Rex-Tibbs Construction Company, filed an appeal on October 4 asking the city to waive payment of a $12,375.00 fee into the Tree Fund.  The fee Rex-Tibbs was hoping to avoid is owed by property owners when they receive a permit to remove a large, healthy tree. (Fees are not owed when a sick or declining tree is removed.) The staff report prepared for the appeal hearing defines the city’s requirement in this case:

“As a Historic Tree, the compensation requirement becomes 3” of replacement to 1” removed or replanting of one 4.5” minimum caliper shade tree and compensation of $110.00 per inch not replanted. Assuming the minimum was replanted, this leaves a balance of 112.5” and a balance due of $12,375.00.”

Other documents obtained by the Voice include a Purchase Contract for the residential property on which the oak stands – a lot in an established neighborhood on Rockwood Way in south Winter Park. In an apparent bid to develop an investment property, Rex-Tibbs Construction is contracted as the sole buyer of the Rockwood property. The property contract is scheduled to close in mid-November.

Rex-Tibbs submitted building plans to the city indicating that they intend to replace the existing 1600 sq. ft. home on the lot with a new two-story 4,500 sq. ft. home. The new building footprint covers the spot now occupied by the historic oak. Winter Park Voice contacted Donney Rex and requested comment and/or clarification of the information obtained in our Public Records Request. As of press time, Mr. Rex did not respond to our request for comment.

During the appeal hearing in front of the Tree Preservation Board, the city’s arborist, Alan Lee, conceded that the size of the historic tree’s canopy creates significant difficulty for construction of a new home on the lot. However, Mr. Lee also pointed out that the historic oak is physically and structurally “in good shape,” adding that he expected the historic oak to live “another hundred years or more.” [Video of Full Hearing]

During the hearing, board members learned that the property on Rockwood is very close to Winter Park Road — a few hundred yards from the spot where the city pruned deep v-cuts into multiple oak trees along the roadway. City officials have stated that the trees were pruned this way due to the declining health of the trees.

Current city code would have allowed Rex-Tibbs to plant or possibly even “donate” multiple trees as a way to significantly reduce the fee they owed the city. A review of the Rockwood Way documents does not show evidence of any alternative building plans or off-site tree replacement strategies requested by the city or offered by the builder.

At the Tree Preservation Board hearing, Donney Rex of Rex-Tibbs construction presented his case to the board members, noting that he has planted many trees during his years as a home builder. Mr. Rex was not opposed to planting a few replacement trees on the property, but did ask the board to waive the $12,375.00 fee. Options including modifying the building plan and/or applying for setback variances to enable the home to be moved away from the tree were not discussed at the hearing. Board members and the city arborist agreed with the builder that the historic tree would have to be removed to enable the proposed new home to be built, as currently designed, inside the current setback envelope.

Soon after Mr. Rex finished his presentation, board member Richard Simpson made a motion to waive the entire fee. Mr. Simpson’s rationale for approval appeared to be largely based on the more lenient Tree Preservation Ordinance provisions his board has recommended to the City Commission. Simpson explained

“I know that the City Commission has not adopted our proposals to revise the tree code, but . . . if we adopted the proposed code — notwithstanding that it hasn’t been approved yet by the City Commission — and approved this with a two tree replacement requirement, we’d be consistent, at least, with the amendments to the code that we [proposed earlier this year].“ 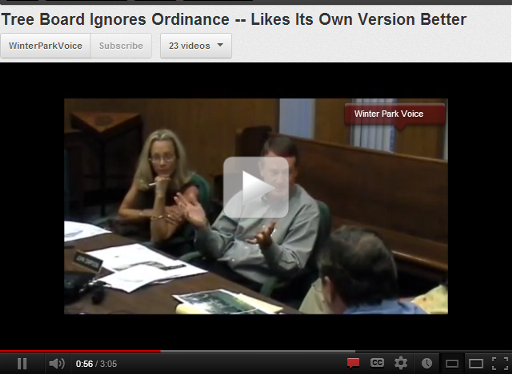 Simpson’s motion was quickly seconded by board member Christine Menkin. Just before the board voted, board chair Woody Woodall assured the board members that he had attended the October 9 Tree Ordinance workshop and observed that “There was really only one person that dramatically opposed our [proposed changes].”

Immediately following Mr. Woodall’s comment, city staff recorded a board vote of “All in Favor” to waive the $12,375.00 fee and require Rex-Tibbs to replace the 39” diameter live oak with two 4.5” trees.

Winter Park Voice requested comments from all Tree Preservation Board members who were present at the hearing, including Anthony Gray, Phil Eschbach, Woody Woodall, Christine Menkin and John Simpson. As of press time, we did not receive any comment on the proceedings, except from John Simpson, who commented via email to the Voice,

“I have no comment regarding the actions taken at the October 18 meeting. The video and minutes speak for themselves. As I am not the chairman of the TPB, it is not my place to speak for the Board.

Regarding the Board’s proposed changes to the ordinance, I suggest that you seek comment from Pete Weldon as he was the member primarily responsible for the proposed changes. As you know, these changes were discussed and revised at several Board meetings and were then adopted by the Board and sent to the City Commission for consideration. I voted in favor of these proposed changes, but recognize that others may have different views and priorities. My intent was to encourage the retention and planting of trees within the City while reducing the financial hardship imposed on property owners seeking to improve or enhance their homes.”