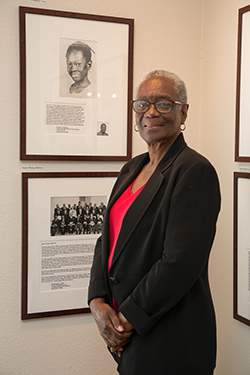 November 5 was a great day for Winter Park when the Historical Society of Central Florida bestowed the 2019 Cheney Award on Fairolyn Livingston, Chief Historian at the Hannibal Square Heritage Center.

“The award,” said Henry, “reminds us all of our champions of the Central Florida community who embody a love, reverence and unfailing dedication for our area’s history.”

Fairolyn was honored for her work as Chief Historian at the Hannibal Square Heritage Center, where she has used her extensive research to enhance the permanent collection there. She has conducted interviews and written text for numerous exhibits, including the Center’s unique timeline installation, which juxtaposes significant events in local and national African American history.

She is a founding member of the team of documentarians, scholars and residents who in 2002  established the award winning show, The Heritage Collection: Photographs and Oral Histories of West Winter Park. This museum-quality documentary about the residents and history of Hannibal Square has been on permanent display since 2007, when the Heritage Center was established.

The Cheney Award is only the latest in Fairolyn’s list of honors. She has received numerous awards and has shared the Hannibal Square community’s vibrant history with audiences across the state. In 2018, Winter Park Magazine recognized Fairolyn as one of Winter Park’s “Most Influential Citizens” for her contributions to understanding and preserving Central Florida’s history.

“Fairolyn Livingston’s invaluable research and outreach work have filled in many once-overlooked and under-appreciated chapters about a vital, important community centered around Hannibal Square in Winter Park,” said Orange County Historical Society Executive Director Michael Perkins. “We’re honored to present her with this award for her many contributions.”