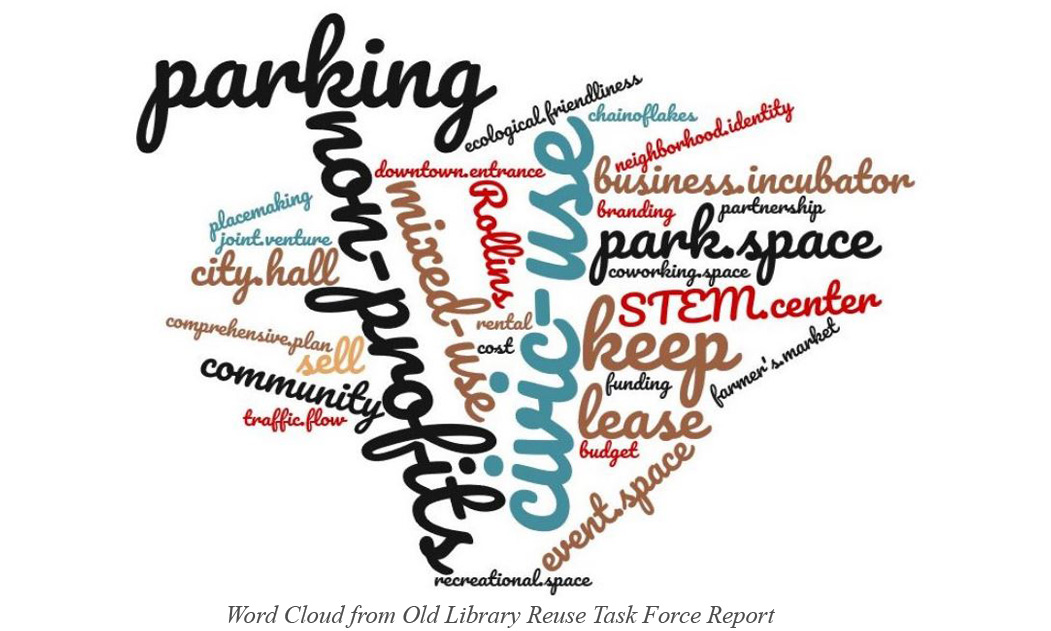 On Thursday, August 11, 2022, three Commissioners voted to enter into a 90-day exclusive negotiation period with Harbert Realty Services, which has submitted a proposal to renovate and manage the 43-year-old former library building on New England Avenue. Commissioners Kris Cruzada and Sheila DeCiccio and Mayor Phil Anderson were present at the meeting.

Commissioner Todd Weaver was out of town and Commissioner Marty Sullivan was representing Winter Park at the annual Florida League of Cities state-wide conference celebrating the centennial anniversary of that organization.

The City’s Request for Proposal (RFP) had strict and limiting requirements. Respondents must agree to a land lease rather than a sale; they had to reuse the existing building; and the use had to be compatible with the surrounding neighborhood.

The limitations in the RFP were not the arbitrary decision of this Commission, rather they stemmed from recommendations of the Old Library Reuse Task Force formed in March 2019. The task force held 10 public meetings, interviewed numerous stakeholders and solicited public comment both at meetings and through the City website and social media.

The Committee’s final report concluded, “Most public comment related to maintaining some sort of city control over the site. It was unclear . . . whether the passion for the site meant the building and land, or if just retaining ownership of the land was important. Few spoke to any aesthetic benefit of the structure, but many did speak to keeping property for city and community use.”

Harbert Realty Services the only respondent

In the end, the restrictive terms of the RFP limited the number of respondents to one – Harbert Realty Services. According to City staff, the chief limiting factors were the City’s refusal to sell the building and the requirement to use the existing building.

Harbert has proposed a 60-year term at $250,000 per year, with a 10 percent rent escalation every five years. In addition to the initial 60-year term, Harbert proposed four 10-year renewal options.

First floor would be focused on wellness

Harbert proposes to sublet the ground floor of the building to a combination of wellness-related businesses and a health food café. The upper two floors would host shared office space. Harbert anticipates investing around $10.5 million in the renovation of the building.

Damien Madsen, Sr. Vice President and Managing Director of Harbert, stated Thursday that it already has a tenant for the upper two floors. Madsen described the tenant as a nationally branded company “. . .that provides shared workspaces, meeting and training rooms, huddle rooms and a variety of private [and] open seating office space.” The space would be geared primarily toward non-profits and smaller start-up operations who want small space and either short leases, usually for a year or less, or part-time leases for one or two days per week.

Harbert’s proposal provides an annual cash flow of $250,000, plus escalation every five years, and it puts the property on the City tax rolls. There will be positive economic benefits from uses in the building, whereas if the building remains vacant it will continue to drain City resources.

According to City staff, the highest and best use of the property from an appraisal standpoint would be to allow multi-family residential instead of the proposed commercial uses. The property is currently zoned R-4.

Commissioners we spoke with seemed optimistic about the chances of successful negotiations. Mayor Phil Anderson pointed out that Harbert Realty Services was the only firm that was willing to take on the project. Commissioner Marty Sullivan summed it up this way. “Is the proposal perfect? No, but it’s pretty good. I hope we don’t let perfect get in the way of good.”

If, at the end of the negotiation period, Harbert and the City fail to reach an agreement, City Manager Randy Knight believes one of the two limiting conditions – land lease and using the existing structure – will likely have to change to generate more interest in a project at that location.