When the Library-Event Center Concept Was Unveiled

On the evening of November 1, Sir David Adjaye, lead architect on the library-event center, revealed his conceptual design before a capacity crowd in the Rachel Murrah Civic Center, which the new building will eventually replace.

Sir David’s presentation was broadcast live via several media outlets, and a video recording of the presentation is still available on the City Website.

This being Winter Park, now that most people have seen it, everyone has an opinion about it. Impressions of Adjaye’s concept offered here by two of our readers broadly reflect the views of our citizens. If your views differ, we invite you to weigh in.

While everyone’s view matters, the views that matter most will be those of the Commissioners. They will decide on Monday, November 13, whether or not we move forward with the concept as proposed.

If the City adopts the concept, Commissioners and City staff must determine how to accomplish the task within the confines of the site and the budget. If the City decides to go another direction, the Commission will assume the responsibility for guiding us down that path, as well. The Commission’s task is not an easy one.

In Praise of Adjaye’s Design 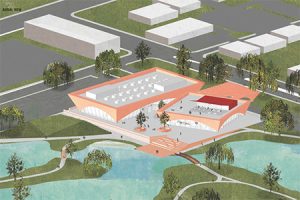 I was prepared to dislike the design proposal from Sir David Adjaye and his colleagues. Aside from his Museum of African American History in Washington, D.C., I had seen little from him that I could appreciate or to which I could relate. But when I heard his presentation and saw his concept for Winter Park, I was surprised to the upside. Every time I review the slides and the various elements of the presentation, I like it more.

What I see in Sir David’s concept are deceptively simple, yet uniquely appropriate, shelters to hold all of the activities and all of the people which will occupy them for years to come. I see a design which bears no time stamp. In the words of Raymond Loewy, “Good design does not become obsolete.”

The structures acknowledge their placement in a lovely park with water views. They take maximum advantage of these, even including a stage at the water’s edge, designed to make the most of the slope to the water. One enters from Morse Blvd. at ground level and advances onto the plaza and into a vantage point from which to survey the park and green space beyond.

I would be very surprised if everyone embraced the concept Sir David showed us. This speaks more to his artistry than it does to the amount of time he did or did not spend in Winter Park.

The winning aspects of the design are many — the column-less, ultra-flexible interior space, the inspired roof line that provides both rain and sun protection, the expansive windows that function to bring the outside in while fostering line-of-sight-contact among users of all spaces, and the thoughtful consideration of the prevailing winds in placing the structures.

Weather control is not possible at the current library any more than it will be at the new one, but Adjaye tried his best to mitigate it. The summer and winter solstices found their way into his renderings. Sun and warmth will be allowed to penetrate most deeply in winter, far less in summer when the roof line creates an angled barrier.

Low maintenance yet highly versatile concrete and glass comprise the exterior makeup of the buildings. The massive glass panes are slanted. Observe any air control tower and some department store windows to recognize this is done to maximize visibility and reduce glare. I suspect it will also help with heat reduction.

The commission must thoroughly explore this before they sign off. Folks have expressed a concern that this glass will turn the library into a massive oven under the Florida sun. I doubt Sir Adjaye just forgot Florida is a subtropical hot environment, but heating and cooling costs will matter.

I am struck by the playfulness of the design and the lightness of feel. It makes me think of parachutes. Adjaye said he hoped it felt like one had placed a “perfect tent” in this lovely place.

It’s true. There is no building in Winter Park that looks like this. Still, there are familiar elements. I think it can belong.

Against the backdrop of this inspiring design, talk of cost over-runs, storm water management and parking issues have reared their ugly heads. We are at a cross roads.

Our Commissioners face a difficult decision. 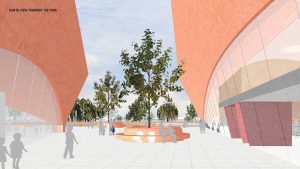 Thank you for scheduling the special meeting to allow the public a first glimpse of the conceptual design for the new Library and Civic Center. It was helpful and informative, but also very disappointing to me.

During the first couple of minutes of Sir David’s talk, I thought that just maybe we might have a chance for a design that would truly add to the character of Winter Park.  He talked about the unique ecology of Florida.  He pointed to our history and some of the architectural history of our town.  Although Sir David spoke of how those things would influence his design, when the design was unveiled, I saw no reference either to our history or to our unique setting.

Consider this if you will. What do people say is so charming about our town after a first visit?  I believe the answer is, clearly, Park Avenue.  And what is so charming about Park Avenue? People love the historic character of the buildings, the inviting human scale of the streetscape and the understated elegance which is, at the same time, modern and highly functional.

Now, what is the one building that is conspicuously out of character with the rest of Park Avenue? That would be City Hall, a contemporary, mid-century modern building. City Hall is a “statement” building that shouts, “I’m different, I want to be noticed for myself.”

Do we really want another “statement” civic building? It will certainly be the most significant and visible project in the general downtown area.  It may also be the LAST and largest civic building built in Winter Park — at least until the current City Hall is renovated.

Why not have a legacy building that is consistent with the character of Winter Park?  Even Disney knew that you don’t build a Tomorrow Land structure on Main Street.

I also have reservations about the proposed design from a practical perspective — in particular, the requirement for exterior transit and the amount of glass used in the concept. The fact that, to enter the Library or Event Center, one would have to walk outside after being let off is silly for our climate.  Anyone who has been caught in one of our summer rainstorms knows that if you are outside, you are going to get wet.  It’s hot in Florida most of the year.  People prefer to get out of the sun and into air conditioning as quickly as possible.

I doubt if the plaza areas Adjaye envisions would be used more than three to four months per year.  Even when the weather is cool, the Florida sun reflecting off those expansive glass windows will likely make the ‘Belvedere’ unbearable.

Turning to the interior spaces, just ask anyone who lost trees in the hurricane what happened to the temperature of their home.  Unless you have a tree canopy above that building, it is going to be one big furnace on the inside, no matter how much engineering goes into those elegantly canted sides – this is Florida!

I urge the Commission to vote NO to the conceptual design as presented.  It will be painful, but there’s still time to cut our losses, thank Sir David for his effort, and get an architect who isn’t going to create “Leary’s Folly,” someone who will design a building that really does reflect our #1 value of, “Honor our historic and cultural features throughout Winter Park.”

We, the taxpayers, are going to spend 30 million of our tax dollars on this project. It’s worth taking the time to get this project right.