Can You Believe It’s August Already?

Even in August, things aren’t slowing down much. We’re at 21 public meetings (down from 23 in July). Nothing is written in stone, so use this link to keep up with the latest schedule changes. https://cityofwinterpark.org/government/boards/

Something’s Rotten at City Hall. The dais where the Commissioners sit has termites. Like the Trojan Horse, the beautiful custom woodwork facing the audience harbors an invading army. Before the army gets out and attacks the entire building, the dais will have to be dismantled and removed and the invaders eradicated. Here’s hoping the City of Winter Park is more successful than the Trojans were. Search is underway for an artisan to design a replacement.

Body cameras for Winter Park’s Finest are in the FY2020 budget. And the Commission voted not to demolish the building at Progress Point. A majority agreed they would wait and see what happens with redevelopment plans for the Orange Avenue corridor. The City did, however, mow the grass at Progress Point. Neighbors are grateful.

Commission meetings are held the second and fourth Monday of each month, beginning at 3:30 pm, in the Commission Chambers on the second floor of City Hall. They go until they’re finished – typically until 5:30 to 6:30 pm unless there is a controversial item on the agenda.

Nineteen citizen boards advise the Commission on topics ranging from Police Officers’ Pensions to Lakes and Waterways and Code Compliance. A full list of these boards and board members can be found at the City website (above link). The August schedule is on the chart below.

In addition to the standing advisory boards, there are currently three task forces, which are formed for a single stated purpose with definite beginning and ending dates. The three task forces are described below. You are urged to attend their meetings.

This task force is formed every 10 years for the purpose of updating the Winter Park City Charter. The Charter is our City’s ‘Constitution,’ its primary governing document. Some major issues are under discussion, making these meetings interesting and relevant. Meetings are held once a month at the Community Center from 6:00 to 8:00 pm. The first hour is devoted to public comment, so best be on time. The next meeting is Tuesday, August 27.

The purpose of this task force is to decide the parameters of a zoning ‘overlay,’ which will establish guidelines for the redevelopment of that stretch of Orange Avenue reaching from 17-92 to just north of the corner of Denning and Fairbanks. Meetings are held twice a month from 5:30 to 7:30 pm in the Commission chambers. The next meeting is Wednesday, August 7.

This group is charged with recommending to the Commission the proper disposition of the current library facility. The task force meets twice a month in the Commission chambers at Noon. The next meeting is Wednesday, August 14.

Not only do we have official commissions, boards and task forces, we also have informal gatherings with the Mayor and Commissioners where you can let them know what you’re thinking and find out what they’re thinking.

The Mayor’s Coffee Talk was in July. Coffee Talks with the Commissioners will be held 8:00 to 9:00 am at the Winter Park Golf and Country Club, 761 Old England Ave.

Note: this schedule is subject to change. Check the City website link at the top of the article for the latest information. 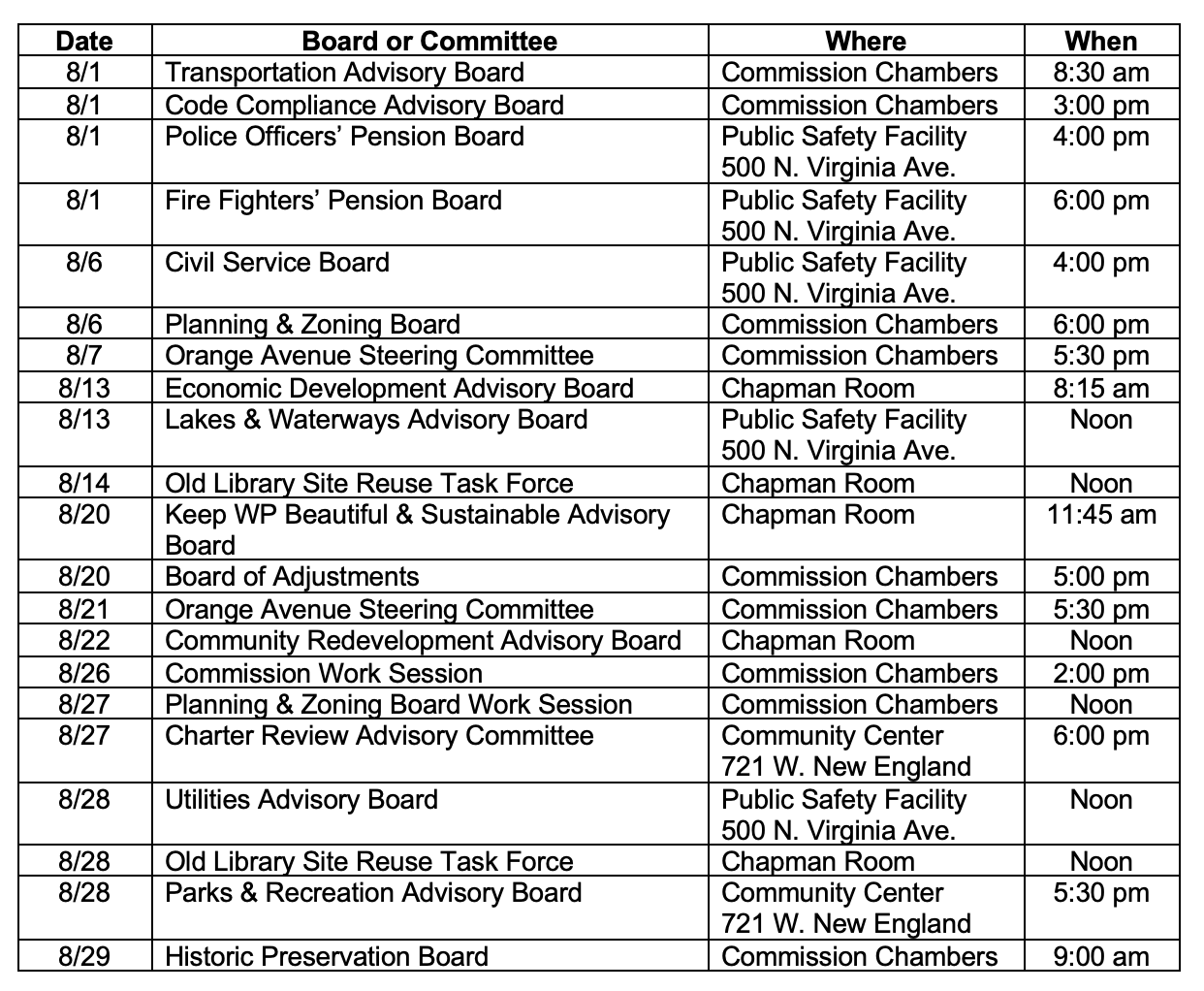