The planned Canopy project may be the largest public works project ever undertaken by the City of Winter Park. Approved in 2016, the Library, Events Center and Parking Garage referendum garnered a slim majority of 214 votes, out of over 10,618 votes cast.

Three years later, why does the public continue to be skeptical about the chances for success?

Why is public trust in this project, funded by taxpayer dollars, continuing to falter? The answers to these questions are not difficult. Look at the project track record over the past four years. Promises were made, then discarded. Trust evaporated. The trend line below speaks for itself.

What if This Were Your Own Health?

Citizens have not been presented with a satisfactory explanation for this list of discrepancies. This is the chance for the commission to step forward and demonstrate leadership.

If this project were a medical patient, we could say we have seen the X-Rays and indicators of a potential complication are all there.

If we wait seven more months, until January, when construction pricing comes due, we then face a crisis decision of whether to administer chemo or radiation or both. Why not take preventive measures now? Get a second opinion? If your health was at stake, what would you do?

Can We Afford This Project?

For many, the fiduciary handwriting is on the wall: we cannot afford this project.

No wonder the citizenry is concerned.

Cost estimates and overruns will not diminish. Instead, they will likely increase. Change orders will become a major concern. Our Central Florida construction market is robust but stressed, increasing pressure on construction costs. That context has already been established with the I-4 Ultimate, Orlando Airport’s New South Terminal and the building boom.

Commissioners Need the Chance to Talk to One Another

At the June 10 Commission meeting, Commissioner Carolyn Cooper requested a workshop so the Commission as a whole could discuss various budget issues, including the Canopy and the CRA, without having to go through the City Manager. She was dismissed by Mayor Steve Leary, but her suggestion deserves reconsideration.

Recommendation: Give Us the Benefit of Your Shared Vision

Put the questions on the table and explore some answers together.

How Much Can the Camel Carry?

If we cannot attain that acceptable price per square foot, alternative scenarios need to be explored. When a project moves beyond 60 percent design, the time and money already invested make it increasingly difficult to say “no” or even to change tack.

Think Big: Where is Plan B?

The goal is to maximize all our assets to make this project the best it can be. For this reason, the process deserves heightened public involvement, heightened communication and heightened stewardship by our elected leaders.

Are our taxpayer dollars being wisely spent? If so, show us how.

That’s how public trust can be restored.

Guest Column by the Winter Park Library Association Board of Trustees

Articles written by citizens reflect their own opinions and not the views of the Winter Park Voice.

The Winter Park Library Association Board of Trustees has requested that the Voice share the following letter with its readers. 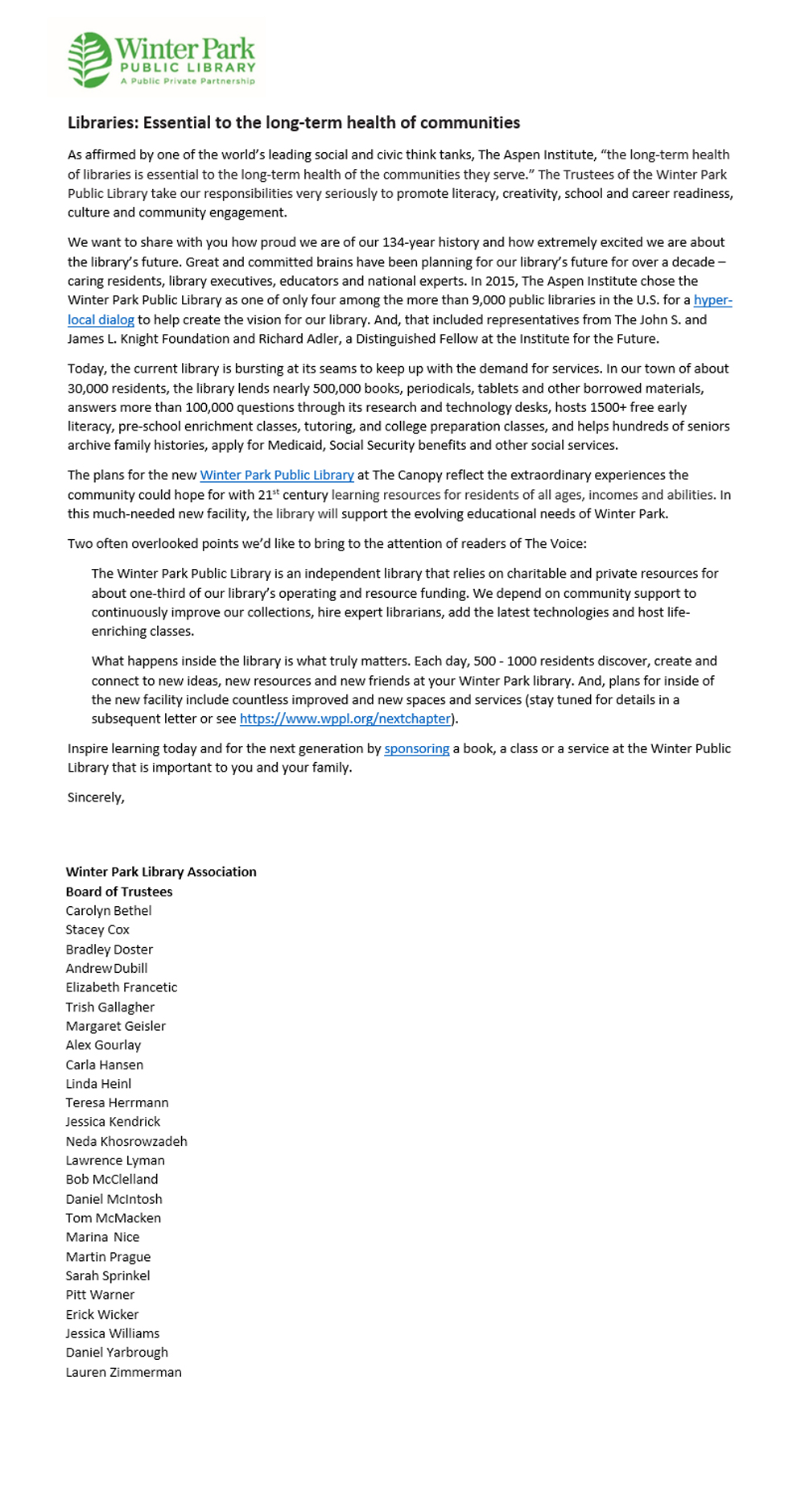 High voter turn-out and a clear win for Weaver may make the City sit up and take notice. The main plank in Weaver’s platform was that the Canopy Project has gone astray. He pointed out that the project – particularly the events center — is over budget and not delivering what the voters were promised – a bigger library. Weaver suggested we hit the pause button and re-evaluate the project in light of current cost projections and City leaders’ plans to use the Canopy events center to attract tourist dollars.